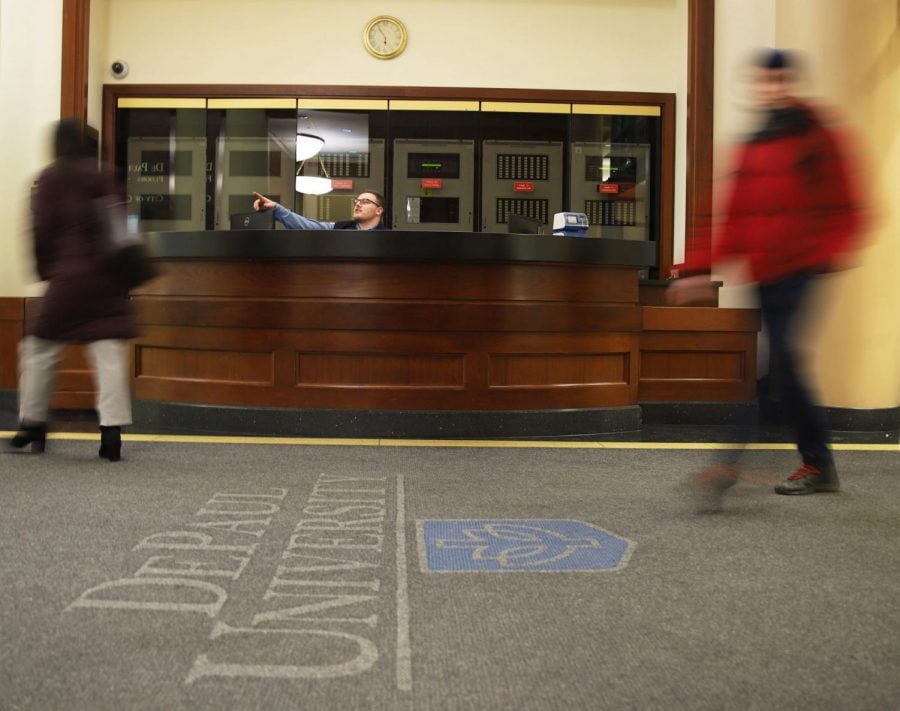 Jerry Lucas, a public safety officer, points students and others in the right direction — a common occurrance — in the DePaul Center.

As each student hurriedly passes through the revolving doors of the College of Law Building to get out of the frigid Chicago temperatures, custodian Clarence Hort patiently waits off to the side with his vacuum.

Once there is an opportunity to clean up the dirt trail that is left unknowingly by each bypasser, Hort takes his vacuum, moving it across the DePaul crest and making the lobby clean for the next set of people.

With the end of the fall quarter drawing to an end, the focus for DePaul students goes almost entirely to preparing for finals. Still, Hort, like many of the other staff members at DePaul, appreciates those students who do take a moment out of their day to wave “hi” or engage in a conversation as he completes tasks. In the year that Hort has been a custodian at DePaul, he usually finds himself completing his job with a smile.

“I’m always smiling,” Hort said. “They [DePaul students] are nice kids, and they ask me a lot of questions. I love it here.”

Fellow custodian Robert Centeno works primarily at the DePaul Center, and his central responsibility is to help maintain the entire building. One of the first things Centeno does to start his Tuesday morning is to clean the entrance of the center. Like Hort, Centeno is accompanied by a tool that will help him complete his job: a leaf-collecting lawn sweeper. His goal – to make sure the outside of the center is as presentable as possible.

Centeno has only been part of DePaul’s facility operations staff for seven months.He is also a student at Morton College, but that has not affected the dedication he has to his work.

Centeno and Hort are just two of over 100 employees that make up the facility operations staff at both the Loop and Lincoln Park campuses. Regardless of the position and what their day-to-day assignments require, the entire staff revolves around the same objective. 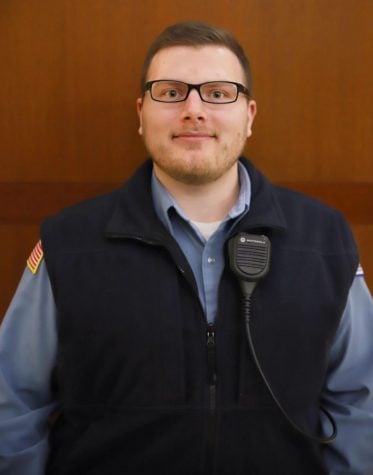 “The key – and they all know it – is to make this place look and function as good as possible,” Director of Facility Operations Richard Wiltse said. “Our job is to put DePaul’s best foot forward every day and to make [the university] function for the students.”

Another individual who knows how to make things function for the DePaul community is Genius Squad Technician and current graduate student Jonathan Anderson.

Inside of the DePaul Center, in room 1128, is where Anderson and the other technicians can be found. Each day requires a different form of troubleshooting. Throughout the quarter, it’s common for the Genius Squad members to help users to connect to the eduroam network. Then there are days where the team has to try and distinguish why there are ambiguous error messages appearing on a person’s electronic device. Those are a bit more challenging.

There’s one aspect of the job that Anderson enjoys more than the rest.

“Helping people out and solving their issues as quickly as possible and just having people satisfied with the end result is the best part about it,” Anderson said.

An elevator ride down from the Genius Squad office to the main floor of the DePaul Center is where, at times, Public Safety Officer Jerry Lucas can be found. The shift that Lucas is given will determine his responsibilities. Sometimes he is at the front desk across from the elevators, surveying and watching over the people who make their way through the center. Other times, Lucas can be helping a student find a lost item while trying to listen to another officer on the radio and at the same time helping another individual with directions.

“As staff you can wear different hats,” Lucas said. “Custodians can help us out. You never know. It’s not just us … You guys too [students] are public safety when you’re reporting stuff. It’s a very involved process.”

With DePaul being an open university, Lucas also helps provide aid to a lot of the local Chicago community.

“Outside of being in the DePaul Center and working for the university, you got to be that community liaison as well,” Lucas said. “People come up to us with good and bad, so you have to respond accordingly and know how to handle different situations.”

For many of the DePaul staff members, their roles are never narrowed down to one specific duty, and it’s the commitment of these individuals that help make the university operate efficiently. Even though they may not always get the credit they deserve, their work doesn’t go unnoticed.

“I always want to help staff feel valued and appreciated at the university,” Staff Council President Erin Berkowitz said. “I have the opportunity to talk with the president of the university, and I will make sure to acknowledge the work that all staff are doing.”