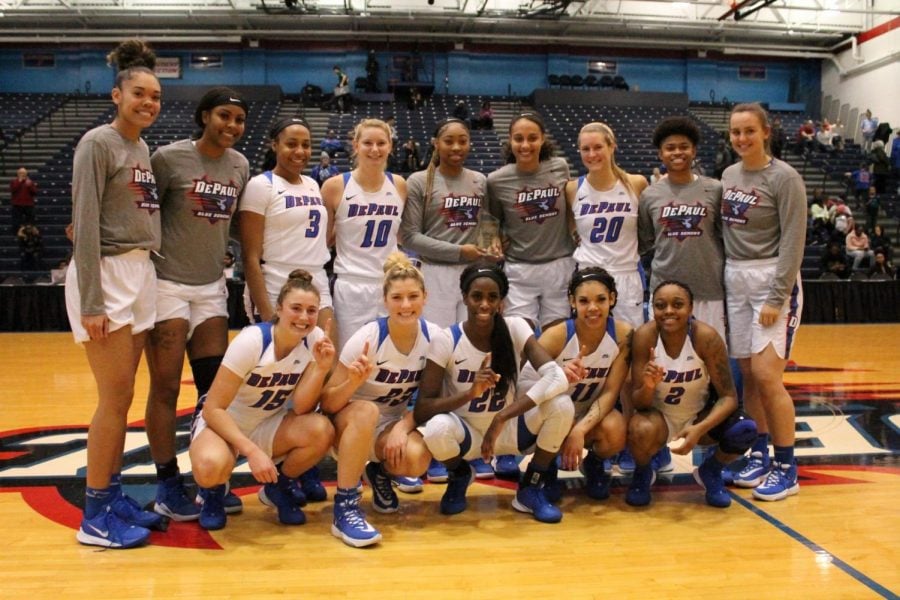 The women's basketball team celebrates after winning the Maggie Dixon Classic on Saturday.

The first time that the Maggie Dixon Classic was played, the tragic loss of the coach the tournament was named after was too fresh in the women’s basketball community.

Just a few months after Maggie Dixon suddenly passed away from a heart arrhythmia the Pittsburgh Panthers, coached by Maggie’s brother Jamie, played Western Michigan as Ohio State faced off against Army. The tournament was held at The United States Military Academy, where Maggie had just lead the women’s team to their first-ever NCAA tournament in her first season as a head coach. Prior to that, Dixon was an assistant coach for five years under Doug Bruno at DePaul.

After a couple of stints at Madison Square Garden, the early season women’s tournament has been hosted by Bruno and the Blue Demons. After a gritty 89-83 win against No. 16 Miami, DePaul honored the late coach with a championship in the same arena where she paced the sidelines as a young assistant.

Maggie Dixon was born in North Hollywood, California and played basketball as a captain at the University of San Diego. She took up an assistant job with the Blue Demons in 2001 before going to Army West Point in 2006 to run the show.

At West Point, Dixon was a surprise success. Shocking the college landscape, Dixon took the Knights to a 20-11 season, a Patriot League championship, and the school’s first NCAA tournament appearance. She was something that Army West Point had never had: someone who could make women’s basketball a focal point of their sports landscape.

After the conference championship, hundreds of cadets stormed the court and carried Dixon off.

Less than a month after the first-round loss, Dixon watched the women’s Final Four game with her brother back in West Point. The next day, Dixon suddenly collapsed and was rushed to the hospital. At the young age of 28, Maggie Dixon passed away from a heart arrhythmia, which was described as an “enlarged heart.” She was buried at the West Point Cemetery, which is usually where only high-ranking officials in the military are buried.

“She really inspires me to do what I do and I’m just happy to have her scholarship and honor her by playing basketball to the best ability I can,” Bekelja said.

Bekelja was playing to her best ability, as the junior guard had 23 points, seven rebounds, and ten assists through both games.

DePaul was all over the tournament, as sophomore guard Jolene Daninger and senior guard Kelly Campbell were named to the all-tournament team.

Senior forward Chante Stonewall was named MVP of the tournament. Stonewall averaged 20 points, 5.5 rebounds, and 2.5 assists through the two games, including a 27 point performance in the championship.

Campbell has her own memories of the Maggie Dixon Classic. When she was younger in her hometown of Wall, New Jersey she would go to the tournament while it was at Madison Square Garden in New York.

“Ever since I was a little girl, my family always went to the Maggie Dixon Classic at Madison Square Garden,” Campbell said. “It was really cool to win in her name and especially beat Miami.”

Dixon’s name will live on through this tournament but also through the people that knew her best.

“She was just very very special to DePaul women’s basketball, the United States Military Academy, and just basketball in general,” Bruno said. “She was a special young woman and we’re happy to have this tournament named after her.”