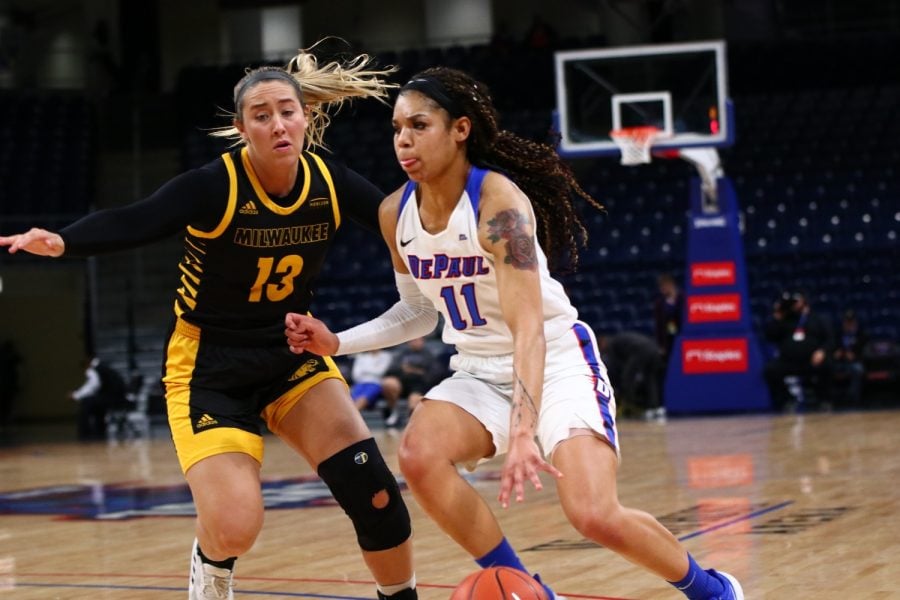 Coming off their close win against then No. 16 Miami in the Maggie Dixon Classic championship game, DePaul had a much easier time dispatching UW-Milwaukee on Tuesday. The Blue Demons defeated the Panthers 94-65 to improve to 5-1 on the season.

After playing back-to-back games on Friday and Saturday, the Blue Demons only had two days to prepare for their next test against the Panthers at Wintrust Arena. But the short amount of rest proved not to be a problem for DePaul as they got off to a quick start against the visitors.

After missing their first shot in the game, the Blue Demons jumped out to an 8-0 lead thanks to buckets from seniors Kelly Campbell and Chante Stonewall, and sophomore Lexi Held. The Panthers quickly took a timeout after Held knocked down a 3-pointer, which helped calm them down after multiple turnovers to begin the game.

The visitors would knock down a couple of shots in the following couple of minutes, at one point they got within four points of the Blue Demons, 14-10, but that would be the closest they got to DePaul.

The Blue Demons would close out the first quarter on a 10-2 run to take a 24-12 lead heading into the second quarter. After a one minute break between quarters, Milwaukee came out playing with more confidence than they did to begin the game — the Panthers would score the first four points of the quarter and would get within eight of the Blue Demons.

DePaul, however, would make sure to restore order in the ensuing minutes by going on a 6-0 run to bring their lead back to 14 points, 30-16. Bruno would also receive quality minutes from his two freshmen in the second quarter, Keke Rimmer and Kayla Caudle. The freshmen duo combined to score 13 points in the quarter, including a 6-0 run by Caudle near the end of the first half.

But the biggest contribution in the first half came from Held, who scored 17 points on 7-of-10 shooting from the field and 3-of-4 from the 3-point line. The Blue Demons closed out the first half on a 14-1 run to take a 59-27 lead into the break.

Coming out of the break, DePaul got off to a slow start — missing their first five shots in the third quarter. In fact, it took the Blue Demons nearly four minutes to hit their first shot in quarter. But once they got the lid off of the rim, they found their groove on offense again.

Sophomore guard Sonya Morris, who only scored five points in the first half, found her shooting touch in the third quarter when she poured in eight points on 3-of-7 shooting.

While the Blue Demons’ offense was once again hitting from all over the field, 48 percent from the field, their defense allowed them to get out in transition by forcing turnovers. The Panthers committed 26 turnovers which gave DePaul 33 points off of their mistakes.

With the game already out of reach in the fourth quarter, Bruno gave more playing to his bench players — including multiple freshmen.

The one negative from the game for DePaul was that they were without their starting junior point guard Deja Church, who was wearing a walking boot on her left foot before the game. Per the athletic department, Church suffered an ankle injury in practice.

Church and the rest of the team will have five days to prepare for their next game when they go up north to face rival Northwestern. In that game, the Blue Demons will not only be shooting for their sixth win on the season — but they will also look to get Bruno to 700 career wins at DePaul.