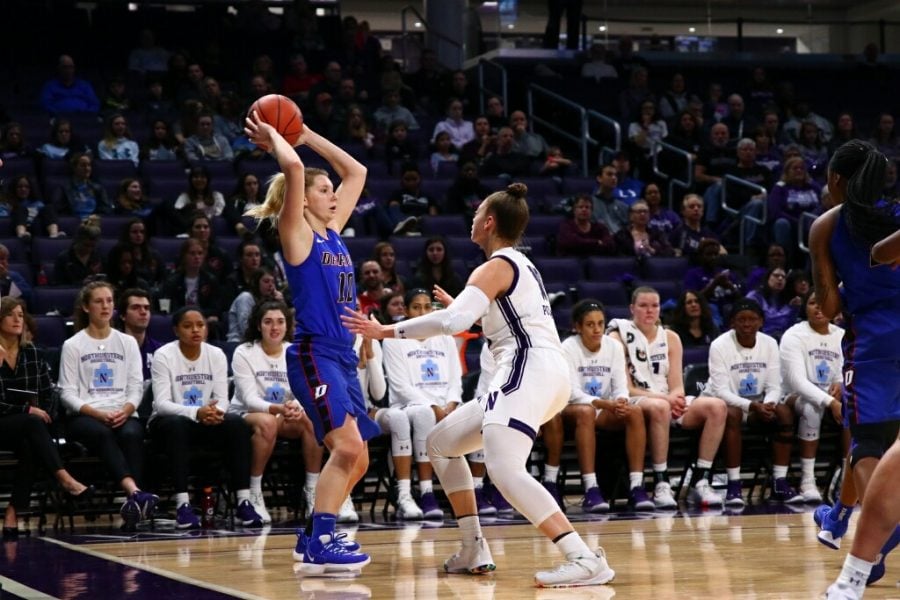 The DePaul women’s basketball team took a quick trip up to the suburbs to play Northwestern in a Sunday matinee contest. The undefeated hosts proved to be no pushovers, controlling the physicality. But late game prowess from the Blue Demons lifted them over Northwestern, 70-68.

In the first quarter, Northwestern and center Abbie Wolf played against the press perfectly. Wolf found herself 10 easy points early. DePaul was able to keep it close though thanks to a 7-for-16 three pointing clip in the first half. After the first quarter, the Blue Demons lead 19-17.

Northwestern made very few mistakes in the first half. The DePaul press wasn’t able to pressure the Wildcats into turnovers or troubles. On the other end, Northwestern’s zone defense was suffocating in the half-court.

Although stellar play from DePaul starters Dee Bekelja, Chante Stonewall, and Kelly Campbell paced the Blue Demons. Bekelja and Stonewall had 11 and 13 points, respectively. Campbell added seven assists in the first half. Sonya Morris had 10 points.

The combination of Bekelja, Stonewall, and Morris accounted for 34 of the 39 first-half points for the Blue Demons, as they lead 39-38 at the break.

Ball movement was huge for the Blue Demons as getting quality shots can be difficult against a well-ran zone. 14 of the 16 field goals in the first half were assisted on.

Going into the second half, the game was still as close as ever with the teams going back and forth scoring. A few quick points from Morris put the Blue Demons ahead at 47-42 halfway through the quarter. Six Northwestern turnovers were forced with three of them coming directly from the press.

A Stonewall three-pointer gave DePaul their biggest lead at eight but it was quickly erased by Northwestern. They forced three turnovers and converted them into six quick points to make it right back at a 50-48 game with 2:30 remaining in the third quarter.

Another surge from the Wildcats gave them a 53-52 lead going into the fourth quarter. Abbie Wolf and Byrdy Galernik had 16 apiece for the home team.

In the fourth quarter, the DePaul offense controlled early. 5-for-6 shooting in the first five minutes of the quarter had them up 63-60.

Neither team was able to pull away during the game. With Northwestern taking a 66-63 lead with under three minutes remaining, the Blue Demons had to fight from behind. Tight possessions down the line lead to missed free throws from Northwestern and a go ahead jumper from Sonya Morris with 22 seconds remaining.

Morris had 22 points on the night. Her ability to score from multiple places on the court has been huge for the Blue Demons and their offense. “A big key was getting the ball in the middle of the paint, that will open up other shots for my other teammates,” Morris said

On the next possession, Stonewall recorded a steal and the Blue Demons got the ball back. They had five fouls to give and DePaul held onto the ball through inbound plays.

Bekelja missed two free throws with 6.2 seconds remaining but the ball went out of bounds off of Northwestern. Stonewall was sent to the line and hit one of two free throws. The defense prevailed on the ensuing possession, giving Northwestern their first loss of the young season.

Stonewall scored 25 points in the affair with 12 in the second half. She was the primary threat down low for the Blue Demons and she was able to get open looks from midrange.

“I might not be the tallest,” Stonewall said. “I feel like I’m mighty like I just try to take all the skills that I’ve learned from our past veterans.”

The win was the 700th in Bruno’s career at DePaul, a feat that only two other active coaches have reached with one program: Harry Perretta at Villanova and Geno Auriemma at UConn.

Although Bruno won’t get caught up in the euphoria of it all.

“I really believe in staying focused in the moment and the game,” Bruno said. “And I really know, look at the numbers and count the numbers… I am proud and honored to have been blessed to coach at DePaul.”

And to Bruno, it’s been a team effort. His coaching staff, the administration behind him as well as his players on the court.

“It doesn’t matter if we’re coaching in our seventh game or our thousandth game, it really just matters about the players in front of you,” Bruno said.

The Blue Demons will face Green Bay on Dec. 7 on the road in their next game