DePaul in thick of nonconference schedule ahead of Big East play 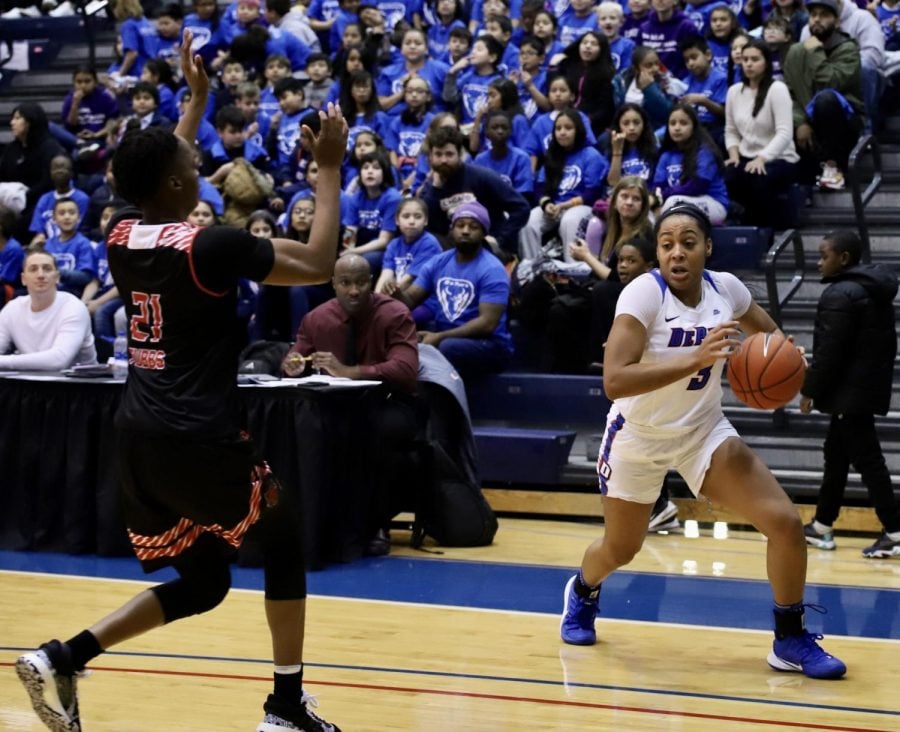 Deja Church drives after a shot fake against Arkansas State in round one of the Maggie Dixon Classic on Nov. 22.

Any team looking to improve will play a tough nonconference schedule. A team that was picked unanimously to win their conference by the coaches, DePaul can prove them right and win another Big East crown. But first, they have to make it through the gauntlet of the early months as a better team.

As any college basketball fan knows, the most important regular-season games come in January through early March when the conference schedule takes over. No matter how good your November and December are, have a bad showing in the conference grind and watch your season fade to dust.

Teams like DePaul know that, and that is what plays into their strong nonconference competition. For years the Blue Demons have locked horns with perennial powerhouses like UConn and Notre Dame while playing tough road games against midwestern teams and competing in preseason tournaments with grueling back-to-backs.

Add all of those contests up and you will hopefully have a battle-tested, mature team by January that has already run a gauntlet. This is what leads to teams that run away with their conference. It can’t be understated the importance of a heavy loss. A team can look at themselves in the mirror and figure out what exactly they need to fix.

The DePaul women’s team got that when they went to Corvallis, Oregon on Nov. 14 to face off against then No. 7 now No. 2 Oregon State in the semi-finals of the preseason WNIT. In a tough environment against one of the most complete teams in the nation, the Blue Demons fell behind in the second quarter and couldn’t climb their way back up, losing 98-77.

But like any well-coached program, the Blue Demons bounced back, winning their next four games including wins over No. 19 Miami in the Maggie Dixon Classic and then-undefeated Northwestern in Evanston.

“We got some DePaul players that needed to get back on the court and play after what happened out at Oregon State,” head coach Doug Bruno said after beating Arkansas State in the first round of the Maggie Dixon Classic.

And DePaul was ready to play, in the opening quarter of the Arkansas State game, the team set their program record for points in a quarter with 45. It was an act of resiliency and a product of a team hungry to win.

That offense shined once again against Miami the next day when DePaul hit 17 3-pointers to down the Hurricanes 89-83.

That quarter and tournament set the tone for an offense that is amongst the best in the country. Coming into their game against Northwestern on Dec. 1, DePaul had the sixth highest-scoring offense in the country at 91.7.

Although the team can win shootouts as well as close, slower-paced games as shown in their trip to Northwestern on Sunday. In that game, DePaul was locked in with a Wildcats team that has size down low as well as crafty scorers and a zone defense that grinds teams down to a halt.

Yet that didn’t stop Chante Stonewall and Sonya Morris, two players who have been shooting the lights out this year. Stonewall scored 25 in the win and has averaged 18.4 points per game to lead the team in scoring.

Morris scored the go-ahead basket with 22 seconds remaining against the Wildcats and has averaged 16.4 points a game on a 48/37/92 shooting split.

The team is averaging 34.8 3-pointer attempts a game while hitting at a 33 percent clip.

The biggest key to success for the Blue Demons has been their pressure defense. Playing a full-court press, DePaul has forced its opponents into 23.4 turnovers a game while averaging 12.6 steals a game. Stonewall has been the biggest force on defense with 3.7 steals a game including a clutch steal late against Northwestern to seal the game.

Even with how great the season has gone so far, the hardest test is still to come. DePaul will travel to play Green Bay, a team that just beat No. 18 Syracuse at the Victoria, British Columbia tournament. After that, it’s a trip to South Bend to face rebuilding Notre Dame, topped off with a two-game homestand against Alabama State and the team that needs no introduction: UConn.

This grueling upcoming schedule is indicative of a team not afraid to weather the storm. Playing in these kinds of games get a team ready for conference action and into March.

These are also the games where senior leadership shines. Chante Stonewall and Kelly Campbell are the lone seniors on the team and were eager to get out and lead the team this year. Campbell has been a facilitator, who is in the top 20 in the country for assists per game. Both players were named to all-country watchlists for their respective positions.

Both players had late-game moments in the two close games. Against Miami, Campbell knocked down six of six free throws to seal the game. Against Northwestern, Stonewall had a pair of late steals and a free throw that extended the lead late.

Northwestern and Miami represent two classic examples of bulletin board games. Games that a team can look back on and draw from later in the season. Their game against Oregon State is another bulletin board game, but one that they can look at come March as a quality game.

As for Green Bay, Notre Dame and UConn, only time will tell for the Blue Demons.