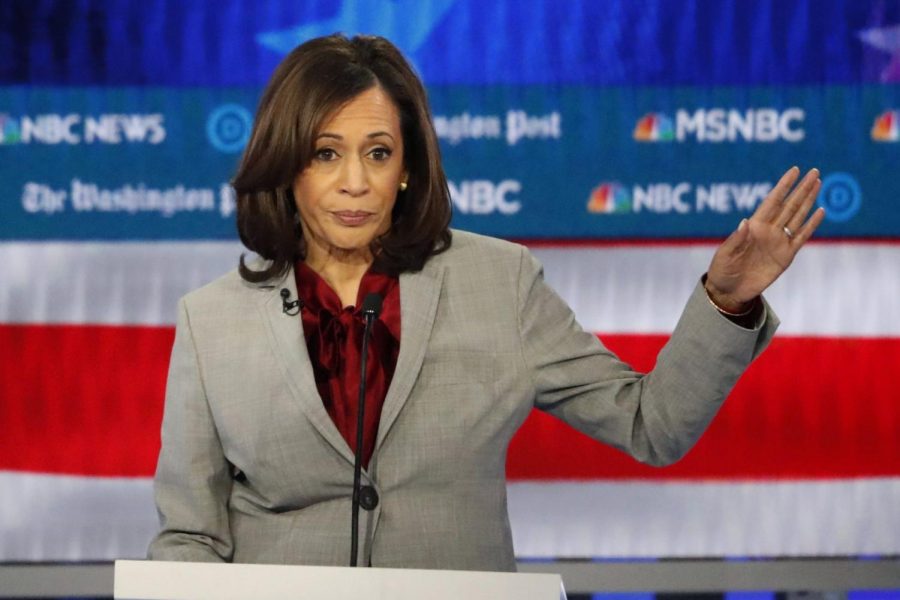 SACRAMENTO, Calif. (AP) — Sen. Kamala Harris told supporters on Tuesday that she was ending her bid for the 2020 Democratic presidential nomination, an abrupt close to a candidacy that held historic potential.

“I’ve taken stock and looked at this from every angle, and over the last few days have come to one of the hardest decisions of my life,” the California Democrat said. “My campaign for president simply doesn’t have the financial resources we need to continue.”

A senior campaign aide said Harris made the decision Monday after discussing the path forward with family and other top officials over the Thanksgiving holiday.

Her withdrawal marked a dramatic fall for a candidate who showed extraordinary promise in her bid to become the first black female president. Harris launched her campaign in front of 20,000 people on a chilly January day in Oakland, California. The first woman and first black attorney general and U.S. senator in California’s history, she was widely viewed as a candidate poised to excite the multiracial coalition of voters that sent Barack Obama to the White House.

Her departure erodes the diversity of the Democratic field, which is dominated at the moment by a top tier that is white and mostly male.

“She was an important voice in the race, out before others who raised less and were less electable. It’s a loss not to have her voice in the race,” said Aimee Allison, who leads She the People, a group that promotes women of color.

Harris ultimately could not craft a message that resonated with voters or secure the money to continue her run.

She raised an impressive $12 million in the first three months of her campaign and quickly locked down major endorsements meant to show her dominance in her home state, which offers the biggest delegate haul in the Democratic primary contest.

But as the field grew, Harris’ fundraising remained flat; she was unable to attract the type of attention being showered on Pete Buttigieg by traditional donors or the grassroots firepower that drove tens of millions of dollars to Elizabeth Warren and Bernie Sanders.

In her note to supporters, Harris lamented the role of money in politics and, without naming them, took a shot at billionaires Tom Steyer and Michael Bloomberg, who are funding their presidential bids.

“I’m not a billionaire,” she said. “I can’t fund my own campaign. And as the campaign has gone on, it’s become harder and harder to raise the money we need to compete.”

Harris suffered from what allies and critics viewed as an inconsistent pitch to voters. Her slogan “For the people” referenced her career as a prosecutor, a record that was viewed skeptically by the party’s most progressive voters.

Through the summer, she focused on pocketbook issues and her “3 a.m. agenda,” a message that never seemed to resonate with voters. By the fall, she had returned to her courtroom roots with the refrain that “justice is on the ballot,” both a cry for economic and social justice as well as her call that she could “prosecute the case” against a “criminal” president.

At times, she was tripped up by confusing policy positions; particularly on health care. After suggesting she would eliminate private insurance in favor of a fully government-run system, Harris eventually rolled out a health care plan that preserves a role for private insurance.

Stumbles, often of the campaign’s making, continued to dog Harris into the winter, stymieing her ability to capitalize on solid moments. Harris kicked off November with a well-received speech at a massive Iowa dinner, just a day after her campaign announced it would fire staff at its Baltimore headquarters and was moving some people from other early states to Iowa.

Her message was regularly overshadowed by campaign aides and allies sharing grievances with the news media. Several top aides decamped for other campaigns, one leaving a blistering resignation letter.

“Because we have refused to confront our mistakes, foster an environment of critical thinking and honest feedback, or trust the expertise of talented staff, we find ourselves making the same unforced errors over and over,” Kelly Mehlenbacher wrote in her letter, obtained by The New York Times. Mehlenbacher now works for businessman Bloomberg’s campaign.

With Harris’ exit, 15 Democrats remain in the race for the nomination. Several praised her on Tuesday.

Former Vice President Joe Biden, who had a memorable debate stage tussle with Harris this summer, called the senator a “solid person, loaded with talent.”

Harris anchored her campaign in the powerful legacy of pioneering African Americans. Her campaign launch on the Martin Luther King Jr. holiday included a nod to Shirley Chisholm, the New York congresswoman who sought the Democratic Party’s presidential nomination 47 years ago earlier.

One of her first stops as a candidate was to Howard University, the historically black college that she attended as an undergraduate.

She spent much of her early campaign focusing on South Carolina, which hosts the first Southern primary and has a significant African American population.

But Harris struggled to chip away at Biden’s deep advantage with black voters who are critical to winning the Democratic nomination.

Harris and her aides believe she faced an uphill battle — and unfair expectations for perfection — from the start as a woman of color. Her campaign speech included a line about what Harris called the “donkey in the room,” a reference to the thought that Americans wouldn’t elect a woman of color.

Harris often suggested it was criticism she faced in her other campaigns — all of which she won.

Her departure from the presidential race marks her first defeat as a political candidate.