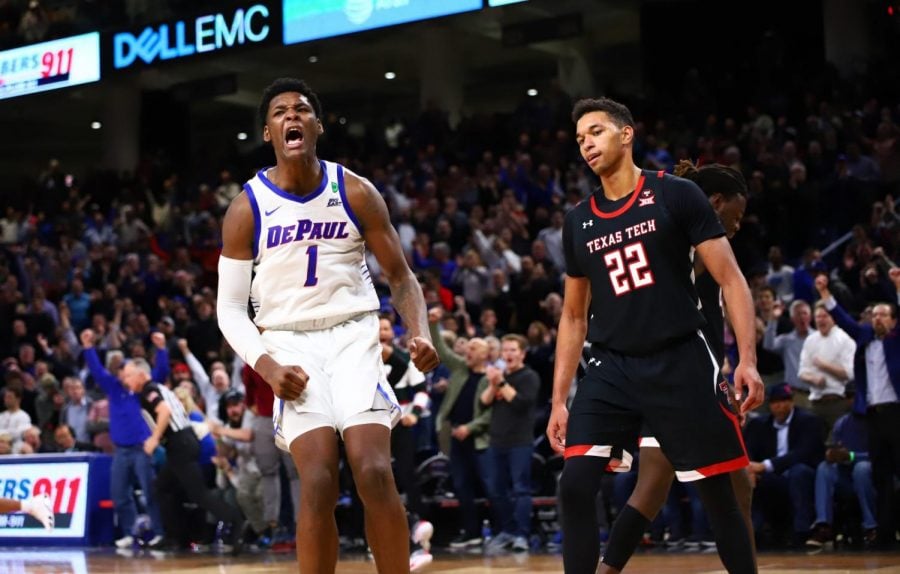 DePaul freshman Romeo Weems celebrates after a dunk in overtime. The Blue Demons won the game 65-60 against Texas Tech.

DePaul’s defense came to play against Texas Tech. Their fans showed up and packed Wintrust Arena for the first time this season. All the Blue Demons needed was for their offense to show up.

For the first 37 minutes, DePaul’s offense was horrendous. They failed to find any rhythm on offense even though their defense was locking down the Red Raiders for most of the game. Unless the Blue Demons’ offense came to life in the final couple minutes of the game, DePaul was heading for their first loss of the season.

Then senior guard Jalen Coleman-Lands decided to put the team on his back and will the Blue Demons to a 65-60 victory against Texas Tech.

With the Blue Demons trailing 50-44 with three minutes to play, Coleman-Lands and senior forward Jaylen Butz scored six straight points for DePaul to cut the Red Raiders’ lead to two points, 52-50. The Blue Demons then fouled Texas Tech’s Davide Moretti with 17 seconds left in the game. Moretti knocked down the first free-throw, but missed the second one — giving DePaul one last chance to tie the game.

That’s when Coleman-Lands knocked down, at the time, his second 3-pointer of the game to tie the match at 53 and send the game to overtime.

“I saw a flare and it touched my hands and I knew it was going up, it felt good,” Coleman-Lands said. “I was just kind of locked in.”

Despite having all the momentum to end the second half, DePaul came out lethargic in the overtime and allowed Texas Tech to take a 57-53 lead with two minutes left in the game. But again there was no quit from the Blue Demons.

“When it was releasing out of his hand I think everyone in the building thought it was going in,” Leitao said about Jalen Coleman-Lands’s game-tying three.

Coleman-Lands once again willed the team back in overtime by knocking down two 3-pointers to give the Blue Demons a 61-60 lead. That stretch from the two-minute mark to the end of the game, proved to be the deciding point of the game. The Blue Demons outscored the Red Raiders 12-3 in the final two minutes.

Coleman-Lands finished the game with 20 points on 6-of-14 shooting from the field and 4-of-10 from the 3-point line.

While the final eight minutes of the game were extremely successful for DePaul, the start of the game — on the other hand — was anything but successful.

DePaul came out of the gates hitting their first 3-point shot, but that area of the floor proved to be a struggle for the Blue Demons up until late in the second half. While the Blue Demons wasted no time getting on the board, it took the Red Raiders over three minutes of game time to get their first points of the game.

“They were very pragmatic, they spent a lot of quality time on offense,” Leitao said on Texas Tech’s offense. “We had to guard so many screens, they moved six, seven, eight passes per possessions to look for good shots. We didn’t fold, we were there for most every possession.”

After hitting a 3-point shot to cut DePaul’s lead to 4-3 with 16:11 left in the first half, Texas Tech started gaining control of the game. The Red Raiders play suffocating defense in the middle of the first half, which allowed them to build a 16-9 lead.

The Blue Demons managed to get their offense going during a five-minute stretch towards the end of the first half when they went on an 8-0 run to take a 17-16 lead. The run was sparked by DePaul’s two junior big men, Paul Reed and Jaylen Butz. The two scored all eight points in that stretch, and poured in 18 of the team’s 23 first half points.

The Red Raiders would respond by closing out the first half outscoring the Blue Demons 10-6, and taking a 26-23 lead into halftime. Junior guard Charlie Moore was held scoreless in the first half, but dished out five assists and grabbed four rebounds.

The majority of the second half was a slugfest, with both teams trading buckets until Texas Tech’s freshman Terrance Shannon Jr scored five straight points to give his team a 50-44 lead. But the Red Raiders would fail to hold onto that lead and as a result, dropped their third straight game.

After the game finished, fans rushed the court and lifted Coleman-Lands into the air.

“It feels great having such a fan base that’s continuing to grow,” Butz said. “More people are becoming engaged with the team so that’s overall a great experience for us.

The Blue Demons will be back in action on Sunday as  they look to improve to 10-0 when Buffalo comes to Wintrust Arena.