Preview: DePaul looks to improve to 10-0 when Buffalo comes to Wintrust Arena 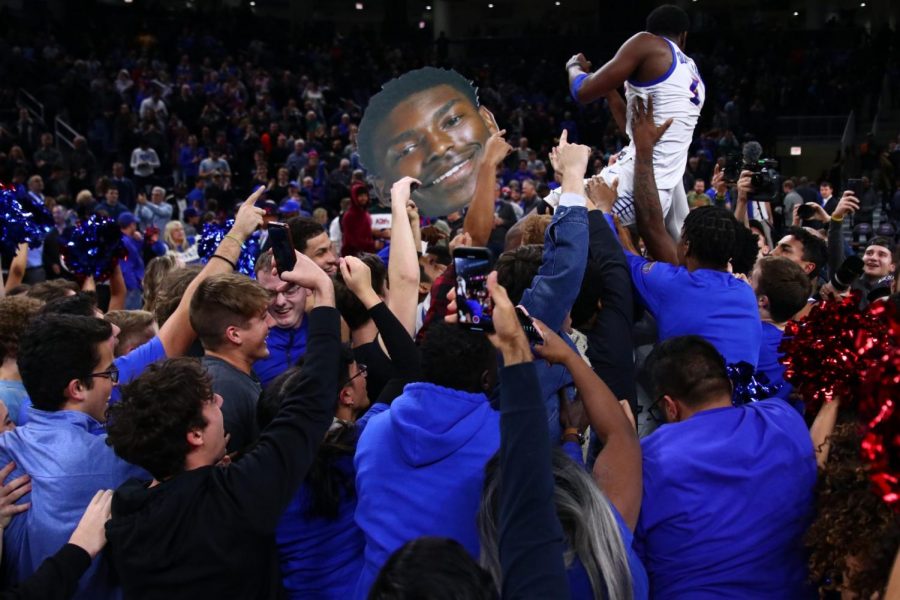 DePaul senior guard Jalen Coleman-Lands gets hoisted into the air by fans after DePaul defeated Texas Tech 65-60 in overtime.

Coming off an emotional overtime win against Texas Tech on Wednesday, DePaul is back in action on Sunday when they host Buffalo. The Blue Demons will look to keep their momentum rolling when the Bulls come into Wintrust Arena looking to end DePaul’s perfect start.

Led by senior guard Jalen Coleman-Lands, DePaul pulled off an improbable comeback in the final two minutes against Texas Tech. With the Blue Demons trailing 53-50 with 17 seconds left in the game, Coleman-Lands knocked down, at the time, his second 3-pointer of the game to send the game to overtime.

But that would just be the start of the senior’s heroics.

In overtime, with the Red Raiders taking a 57-53 lead, Coleman-Lands knocked down another 3-pointer to cut the lead to one, 57-56. In the next Texas Tech possession, the Illinois transfer drew a charge to get his team back the ball — which allowed the Blue Demons to take a 58-57 thanks to a dunk from freshman Romeo Weems.

After former DePaul commit, now Texas Tech freshman, Terrance Shannon Jr hit a 3-pointer to give his team back the lead, 60-58, Coleman-Lands once again responded by knocking down the game-winning 3-pointer with 55 seconds left in the game.

The win improved the Blue Demons to 9-0 on the season, and possibly on the verge of being ranked in the AP Poll for the first time since 2000. But before the new poll comes out on Monday, DePaul will need to take care of business against Buffalo at Wintrust Arena.

What to watch for:

This is the classic trap game in sports where the underdog surprises the favorite and pulls off an upset win on the road. DePaul comes into this game as the prohibitive favorites, but they just pulled off their most impressive win against Texas Tech, so it will be interesting to see how DePaul plays against an underrated opponent in Buffalo.

If the Blue Demons hope to be included in the new AP Top 25 Poll on Monday, this is a game they take care off. The first half will tell a lot if DePaul is ready to play this game, if they are, this should be a comfortable win for the Blue Demons.

The junior guard struggled shooting the ball against Texas Tech, going 2-of-10 from the field and 0-of-4 from the 3-point line. But, like all good players, he influenced the game in other ways that contributed to DePaul’s win. While only scoring six points against the Red Raiders, Moore had 10 assists, five rebounds and five steals, including a steal to end regulation and another steal in overtime that prevented Texas Tech from taking the lead.