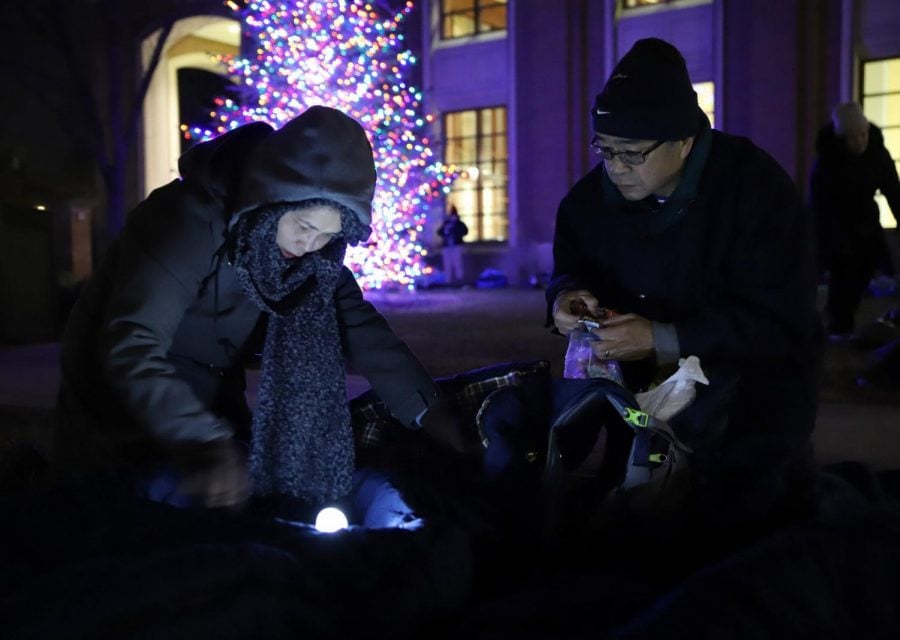 On a cold, cloudy Chicago night of about 38 degrees Fahrenheit, DePaul hosted the Chicago Sleep Out on Dec. 7. About 130 participants joined together to spend one night sleeping outside in the Lincoln Park Quad. Many were only equipped with sleeping bags, blankets and layered clothing to keep them warm.

The World’s Big Sleep Out is a one-time, worldwide event during which more than 50,000 people in 50 international cities sleep outside for one night in a display of solidarity with people experiencing homelessness and displacement. One hundred percent of proceeds go toward registered charities which help homeless and displaced people.

Lydia Stazen, executive director at the Institute of Global Homelessness (IGH), coordinated DePaul hosting the Chicago Sleep Out through an ongoing, five-year partnership with IGH and the university. IGH works with about 13 international cities to create goals and implement strategies to end homelessness in those cities, she said.

“When The World’s Big Sleep Out approached us to be an international partner, it was a no brainer,” Stazen said. “We are creating the world’s largest moment of solidarity for people who are experiencing homelessness and displacement. Tonight, 50 cities around the world, across different time zones, are sleeping out in one moment to raise awareness of funding for organizations that support people who are experiencing homelessness.”

The Student Center had performances ranging from guitarists, dancers and discussions by worldwide and local organizations discussing homelessness and the goals of the event, before a select number of participants get ready to sleep outside for the night.

Arun Zachariah, a senior accounting major at DePaul, has been volunteering at the DePaul Community Service Association (DCSA) for almost four years, and the issue of homelessness deeply affects Zachariah.

“I’ve seen the personal effects of [homelessness] at DCSA and I knew I wanted to be involved in the Sleep Out,” Zachariah said. “I know it will be challenging, but it is for a good cause and brings awareness. I am wearing five different layers of clothes, a nice sleeping bag and mentally, I am telling myself I can do this and it won’t be that bad.”