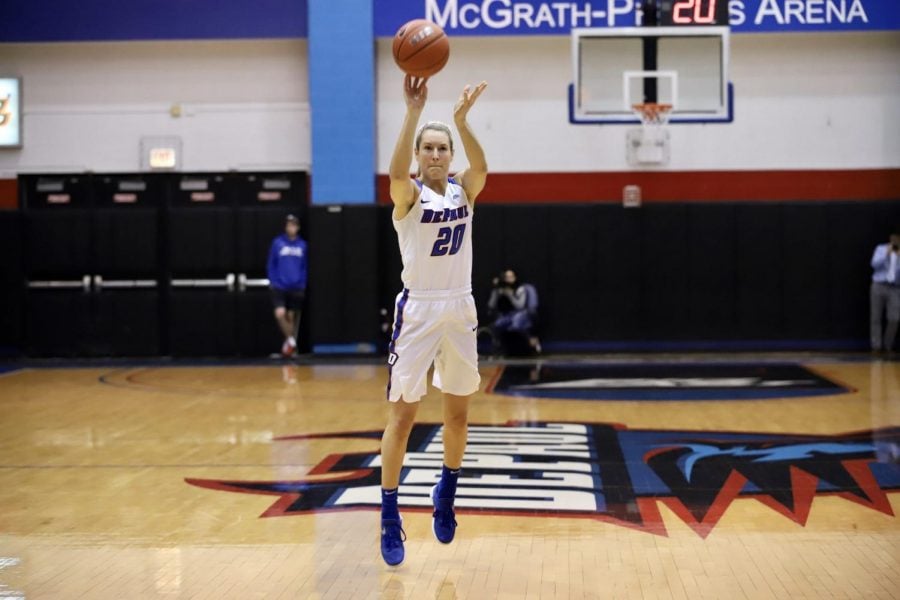 Senior Kelly Campbell rises for a 3-pointer against Arkansas State on Nov. 22.

It’s been five full seasons since Notre Dame was alongside DePaul in the Big East. Since then, the perennial top-five team has been on Doug Bruno and the Blue Demons’ calendar every season to no avail to their record. They’ve lost seven consecutive matchups all in nonconference play with one of them coming in the second round of the 2015 NCAA tournament.

In fact, Notre Dame has been in the top five every single time the two have faced since conference realignment. The two rivals may combine for heated games every season, but Notre Dame has had the upper hand for much of the decade.

Which is what makes this game on Wednesday extra compelling. For once, DePaul is the higher-ranked team coming in at no. 15 in the AP poll while standing at 7-1. Notre Dame is currently in the midst of a 5-6 season that saw them get trounced 81-57 by no. 2 UConn on Sunday.

The national championship runner-up did something last year that only one team had ever done before: they had all five of their starters picked in the first round of the WNBA draft.

So the loss of all-American level talent has struck the Fighting Irish with their first down year since probably 1991-92. As long as head coach Muffet McGraw has been at the helm, Notre Dame has had just two seasons where they weren’t in the NCAA tournament.

It isn’t time to press the panic button by any means for Notre Dame. On name alone, they can’t be taken lightly.

“It doesn’t matter who’s on their team or who’s on our team it’s always a big, tough, strong game,” Bruno said.

Notre Dame may be standing at 5-6, but they have four players averaging in double-figures as well as a defense holding teams to 27 percent from deep.

“You can’t just let your guard down, plus it’s a road game,” Bruno said. “We aren’t taking anything for granted just because Notre Dame is not doing what they’ve done in the past.”

DePaul is coming in with three starters averaging in double figures led by senior Chante Stonewall with 17.4, followed by Sonya Morris with 16.5 and Lexi Held with 14 a game. All three have had games over twenty points and are the focal scoring point of an offense that is top four in the nation in scoring.

The drive behind that offense is senior point guard Kelly Campbell. Campbell posted 10 points, seven assists and zero turnovers against Green Bay in their come from behind win last Saturday. Campbell currently leads the country in assist/turnover ratio.

The game will be at 5:30 central time at the Purcell Pavillion in South Bend, Indiana. You can catch the game on the ACC Network as well as ESPN3.