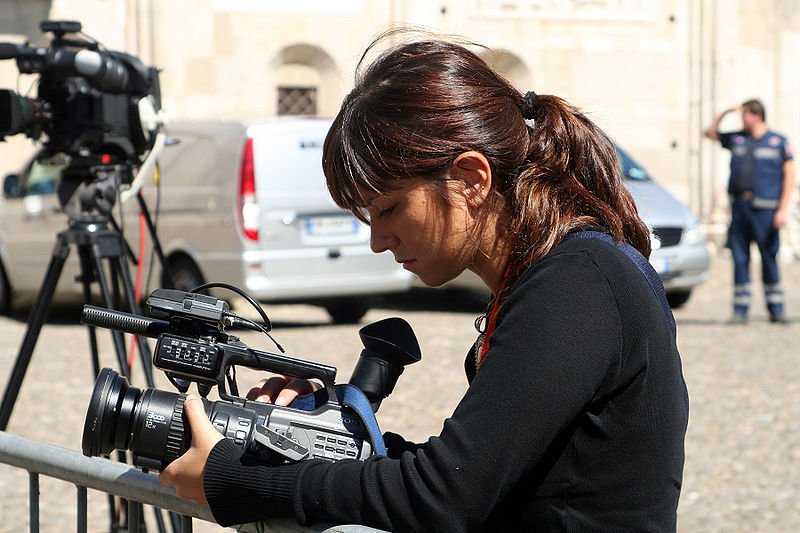 “There are no jobs in journalism”

You hear it all the time. Newspapers are dying, there is no money in reporting, everybody is being laid off, nobody reads anymore, all successful news is just click bait nowadays, etc. If you’re a journalism major, or you have friends who are journalism majors, you’ve probably heard it.

But is it true? Is a journalism degree really just a fast pass to unemployment post-college or living check-to-check? Is it just a surefire way to – nine times out of 10 – head back to school in a few years to get a business degree or something more traditional? Well, not necessarily, depending on who you ask.

For Karyn McCoy, assistant vice president of DePaul’s Career Center, the narrative that there are no jobs in journalism stems from the way news has moved from print to online in recent years.

“I think it [the idea that there are no jobs to be had] is partly driven by media itself,” McCoy said. “You see all the kind of doom and gloom. I mean, we’re seeing it right now with the Tribune having been sold. That organization that just bought it is known for slashing newsroom personnel, so we see a lot about how newspapers are going away, magazines are going away. So I think it’s not necessarily that jobs in journalism are going away; it’s understanding what do the new jobs look like.”

Speaking with Amy Merrick, a journalism instructor in the College of Communication who, in addition to other courses, teaches business reporting, magazine reporting and online reporting at DePaul, this storyline is nothing new.

“People said that [there are no jobs in journalism] 20 years ago and so I’m really glad I didn’t listen to them because I’ve had a career that I really enjoyed and I still work as a journalist,” Merrick said. “It’s complicated – it sort of depends on where you look. There are national publications that have really figured out a balance between subscribers and advertisers that is allowing them to thrive. The New York Times is thriving financially, the Washington Post is thriving financially.

“Then you have a lot of niche publications that are also doing well and people taking advantage of the platforms like websites and social media to build our audience that way,” Merrick continued. “Where you see a lot of challenges are in kind of the midsize metro papers that are challenged in the sense that they don’t necessarily have the staff to cover the whole country, but [they] also have relatively high overhead and so that is challenging.”

While these midsize metro papers and local papers may be closing their doors or laying off employees left and right (a study done by the University of North Carolina found a “net loss since 2004 of almost 1,800 local newspapers”), in their place hundreds of new ways to earn a living as a journalist have popped up. While there were roughly 28,000 less jobs at newspapers in 2018 than there were in 2008, according to Pew Research Center, that speaks more than anything to the changing ways in which people get their news. Today, you’re much more likely to see a college student getting their sports media fix from a site like Bleacher Report or ESPN’s website than, say, Sports Illustrated or the Chicago Tribune.

If you like music, you’re probably reading something like Pitchfork, HotNewHipHop or The Fader rather then getting a physical copy of Rolling Stone or The Source. Just because people don’t read newspapers and magazines like they used to does not mean they don’t read the news.

Furthermore, jobs outside the realm of journalism are almost always open to hiring journalism majors because they’ve demonstrated they can write well and hit a deadline.

According to Karyn McCoy, this diversity of skills accumulated by journalism majors is highly attractive to jobs that are hiring.

Additionally, the warning that a journalism degree is risky has always been overstated, whether that be when Merrick was in college 20 years ago or today when many journalism students are told similar things. In fact, the Career Success tool on DePaul’s website shows 96 percent of DePaul’s journalism graduates were employed or in graduate school within six months of graduation with a median salary of $36,000.

Speaking with Rick Brown, the faculty adviser for Good Day DePaul and a television news professor at the university, despite all the attention paid to the ways journalism is changing, Brown still sees his students landing jobs at the same rate as when he started at DePaul a decade ago.

“[I’ve noticed it change] very little,” Brown said. “Nothing [in terms of getting jobs], as long as they’ve done what I’ve sort of suggested they do. We have been at almost 100 percent placement since I have been here. Again, that is people that have followed the procedure. [If] they’re not interested in doing that, or unable to, or don’t want to, then it could be a little bit more difficult.”

So why does this myth exist? Why is journalism thought to be such a risky degree? It could have something to do with pay, which is traditionally on the lower end, especially for entry level positions. Maybe it has to do with the fact that journalists are always jumping from one job to the other, usually starting in a small market before working their way up to larger ones. It’s also entirely probable that because the way we get our news has changed so much in recent years, we just assume it’s not a stable profession.

However, talking to Merrick, another answer to the question was brought up. Journalists are associated with more creative professions – professions we typically consider to be boom or bust in nature.

“I do think that people see it [being a journalist] as more [like] being an actor or being a musician, and whenever you’re in a creative field there is a lot of competition,” Merrick said. “And also I think some of it comes from family members whose responsibility, to be honest, has been to keep you alive until you became an adult, and so their concerns for stability are understandable because that’s what their goal has been all along, so sometimes you have to sort of convince people that this is a route that is not going to sort of threaten their dreams of stability.”

Ultimately, for many journalists, while we are aware that there may be some risk attached to entering the field, with some outlooks telling a sobering story (the Bureau of Labor Statistics anticipates 5,100 less ‘journalism’ jobs by 2028), journalism is what we do, all we know and so, risk or no risk, it’s worth taking that leap of faith. When the alternative is clocking in to a job that you don’t care about, you’ve got to roll the dice and give it a shot.

“I want to go into sports journalism,” said Josh Handelman, a senior pursuing a journalism degree at DePaul. “But it’s difficult because a lot of those jobs are working in really small bubble towns in rural Texas for a few years and then you kind of just have to catch your break and find a bigger network. So it worries me that it’s a tough path to take, but at the same time if it’s what I want to do, I’ll shoot my shot. I believe I’ll be able to do it if I put my mind to it.”