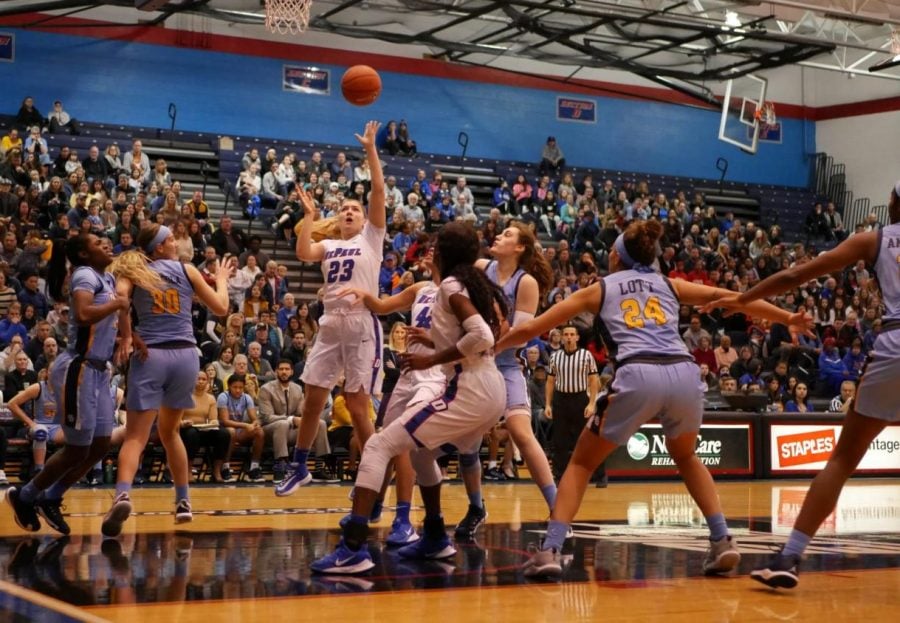 The game was close early on. DePaul started the game on a woeful 3-for-18 shooting performance in the first quarter, but their pressure defense forced 11 turnovers from Marquette, keeping the home team in the game. Lexi Held scored five points for DePaul as they trailed 12-9 after one.

In the second quarter, Chante Stonewall went to work early. The senior and leading scorer notched the first seven points of the quarter. The Blue Demons made seven of their first eight attempts, pushing them to a 26-20 lead with 5:30 left in the first half.

Marquette would answer inside a few times, with 18 of their first 22 points coming in the paint. Lauren Van Kleunen was a major force in the paint for the Golden Eagles, as she had six points and four rebounds in the first half. Altia Anderson came off the bench for Marquette to score eight points.

Although DePaul would find their groove as they forced more turnovers and hit a few crucial shots that had them in the driver’s seat after two quarters with a 41-33 lead. Stonewall had 15 points to lead all scorers. Marquette committed 15 turnovers in the first half.

The second half saw DePaul take off running. A few fast break points and some key buckets from Deja Church had the Blue Demons up 56-45 with 4:04 remaining in the third quarter. Offensive rebounds made the difference early for the Blue Demons.

For Marquette, Van Kleunen was about the only player getting better on offense for them in the second half. Her ten early points kept the game from getting out of hand. But the last few minutes was all DePaul, as Lexi Held drained a mid-range jumper to make it 67-53 going into the final quarter.

Held and Church lead the scoring for the Blue Demons in the third quarter with eight and seven points respectively.

DePaul opened the fourth quarter hot and closed the door on Marquette, making four of their first five field goals by four different players to take a 77-61 lead with 7:03 remaining.

Over three minutes would go on without a field goal from either team before trading layups with 3:26 remaining in the game. Tight defense from the Blue Demons kept the game in hand until Lexi Held hit a three to put Marquette away for good. DePaul would go on to win 89-71.

Chante Stonewall stuffed the statsheet with points and steals, but it was the effort all around that kept Marquette on their toes. “Chante is up at the front of that pressure and she’s exhausting herself every possesion,” head coach Doug Bruno said. “And that takes a lot of effort, a lot of energy and a lot of will.”

It was a sweet victory for Stonewall, the senior has played Marquette throughout her career at DePaul. Most of the games have been intense, including her and-one game winner in the 2019 Big East title game.

“It feels good,” Stonewall said. “I can just think back to even my freshman year I felt like we always lost our first game to Marquette… So it was really nice to actually get this victory.”

The Blue Demons will face Providence on the road on Friday, Jan. 3.