The 90s are back with ‘John Mulaney & the Sack Lunch Bunch’ 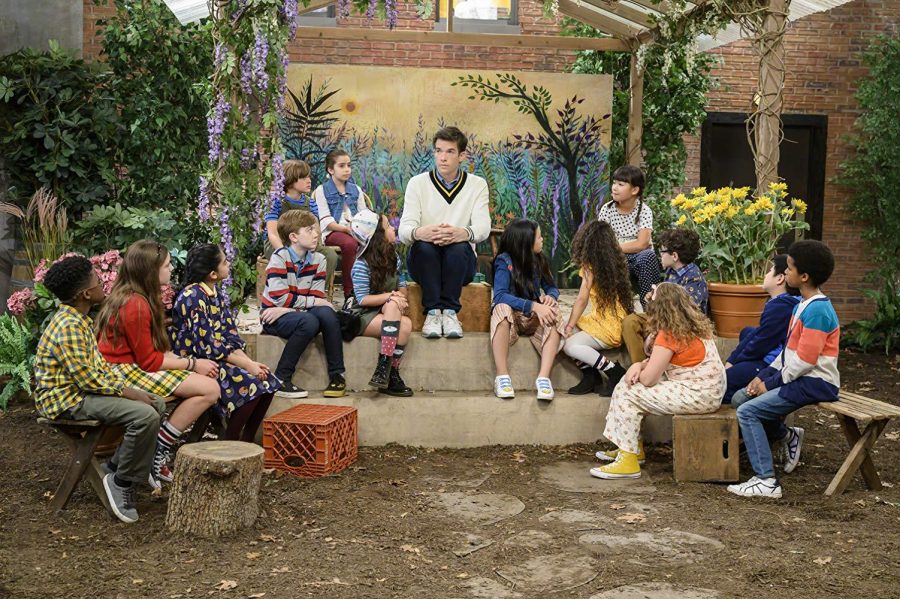 A Mr. Rogers-styled, sweater-clad John Mulaney and his hoard of elementary schoolers present a variety of skits, songs, and incredibly well-written banter delivered from the public garden of a set reminiscent of Sesame Street.

Anyone who watched PBS growing up will find a flood of youthful nostalgia in this 70-minute Netflix production, “John Mulaney & the Sack Lunch Bunch.” In the words of the host Mulaney himself, it is simply “a children’s TV special… a show for kids, by adults, with kids present.”

While audiences disagree about which age demographic the show is truly geared towards, all can agree that the kids are a lot more than present. Mulaney may be the host, but it is clear to see that the children are the stars.

The special by itself is a fairly simple concept. “Recently,” explains Mulaney, “I watched children’s TV and I didn’t like it at all. But I liked it when I was a kid so that means it was better back then. So I made it like then.”

As this premise lures intrigued viewers in, questions still must be posed: what is this show trying to be? Who is it for?

In evaluating its genuine effectiveness as a children’s show, not much can be said, at least in this review. I am not a child, nor am I educated in anything child-related. But I can try to understand what might be entertaining to a younger audience. All but one or two skits and songs could feature on a modern-day children’s TV show.

The transitions though, where Mulaney has time to riff with the kids, are clearly written for audiences over their pre-teen years. Almost nothing inappropriate is ever brought up, but it may take a more mature audience to understand some references and the humor of the bit.

I hesitate to state that Mulaney has made the perfect children’s show, one where the parent enjoys the show as much as the child and stays to watch instead of leaving the child alone in front of a tv screen. Nevertheless, he comes fairly close. The Sack Lunch Bunch as a special somehow provides entertainment for both children, teens and adults equally, without the use of almost any mature themes or language.

Those who are familiar with John Mulaney’s previous work will undoubtedly continue to enjoy his writing, performance and style of wit. Those unfamiliar will be handed a well-crafted comedy special with unique and clever jokes.

And those who simply do not enjoy Mulaney’s type of comedy should still be impressed by the masterful art of comedy writing and delivery, regardless of whether the individual viewer believes the joke to be funny.

Another area in which the special delivers quite well is the guest star list. Richard Kind, Broadway regular Andre De Shields, and Jake Gyllenhaal all make substantial appearances. The bow on this wonderful Christmas present of a show, which was released on December 24th, is its message. After Gyllenhaal comically fails at performing his planned songs and skits, Mulaney and the Sack Lunch Bank console him. They echo the sentiment that it was okay to fail and that they “don’t care… nobody cares.”

If nothing said thus far has persuaded, at the bare minimum, I can confidently say that with all the children’s shows meant for ages 8 to 12-year-olds out there, the average 20-year-old DePaul student will enjoy John Mulaney and the Sack Lunch Bunch the most.