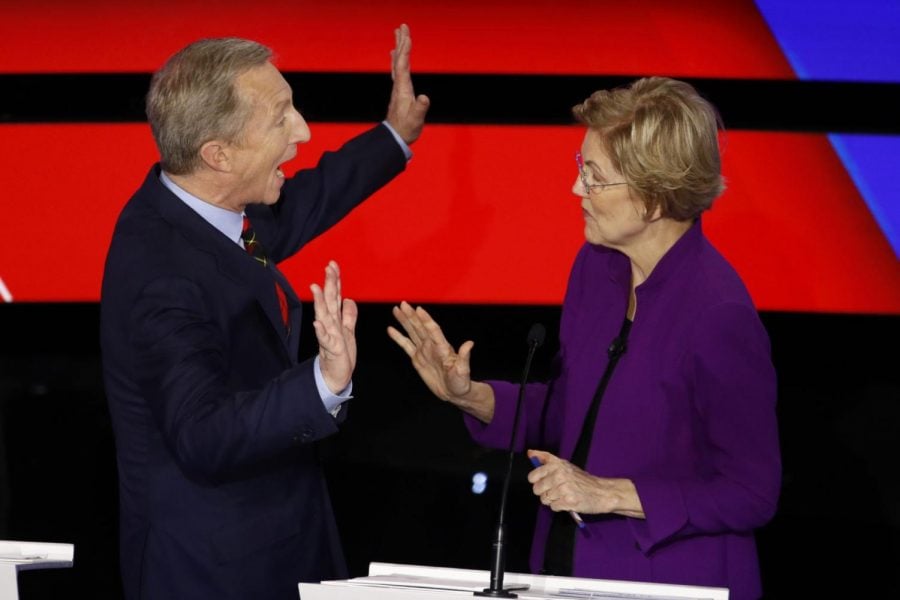 CIVILITY AND SUBSTANCE OVER FIGHTING AND FRICTION

After the United States’ killing of Iranian Gen. Qassem Soleimani, Democrats were bracing for fights over foreign policy. Instead, a whole lot of substance broke out.

There was a brief skirmish between Vermont Sen. Bernie Sanders, who opposed the Iraq War, and former vice president Joe Biden, who apologized for supporting for it. But most of the opening 30-minute discussion — one-quarter of the time set for the debate — focused on the future.

Former South Bend, Indiana, Mayor Pete Buttigieg and California businessman Tom Steyer tried to argue that their outside-the-Beltway resumes would be benefits in the Oval Office. “What we are hearing is 20 years of mistakes by the American government in the Middle East,” Steyer said. “It’s time for someone from the outside having a strategic view on what we’re trying to do.”

The two liberals, Sanders and Massachusetts Sen. Elizabeth Warren, argued the United States needed to pull its troops entirely from the Middle East and Afghanistan. “The American people are sick and tired of endless wars that have cost us trillions of dollars,” Sanders said.

Warren said generals keep arguing the United States is “turning the corner” in its fights. “We’ve turned the corner so many times we’re going in circles in these regions,” she quipped.

The two voices backing traditional foreign policy were Biden and Minnesota Sen. Amy Klobuchar, who both argued for at least a small military presence remaining in the Middle East.

Buttigieg, a 37-year-old who served as a military intelligence officer in Afghanistan, cast foreign policy as part of his generational argument. “There are enlisted people I serve with barely old enough to remember some of those votes,” he said after Biden and Sanders talked about their 17-year-old Iraq war votes.

ABOUT THE FIGHT THAT DIDN’T HAPPEN

The pre-debate chatter was about an expected fight between Sanders and Warren over Warren’s assertion that Sanders told her in 2018 that a woman couldn’t be elected president. Sanders denied it, Warren didn’t press it. Their fight didn’t happen, but it did spark a more spirited discussion about gender and power.

Sanders continued to deny he’d ever said it. “Does anyone in their right mind believe a woman can’t be elected president?” he asked.

The answer is yes. It’s a sentiment often heard among Democratic voters and operatives who are still traumatized by Hillary Clinton’s 2016 loss. Warren did not repeat onstage that Sanders made the statement but said, “This question about whether or not a woman can be president needs to be addressed head-on.”

Warren said she and Klobuchar, the two women on the stage, were the only ones who had won every election they had run. But there was obvious tension when Sanders tried to correct Warren’s statement that she was the only person onstage who’d beaten an incumbent Republican in the past 30 years. He noted he’d ousted a Republican when he won his first congressional election in 1990.

“That was 30 years ago,” Warren responded coolly.

After the debate, it appeared that Warren declined to shake Sanders’ hand.

RARE OOPS FOR ‘A’ STUDENT

Klobuchar is an “A” student in the art of the local when she campaigns across Iowa. Dropping names of local political officials, cities, counties, vote totals and local heroes, Klobuchar is a disciplined candidate reminding voters in Iowa she understands them.

Yet, in the middle of an explanation of all the women who won governorships in 2018, she got stuck trying to remember the name of Laura Kelly of Kansas.

“And her name. … I’m very proud to know her, and her name is governor … Kelly,” Klobuchar said, swallowing the new governor’s last name.

She later tried to bounce back with a tongue in cheek. During an exchange about health care, Klobuchar quipped, “The Affordable Care Act is 10 points more popular than the president of the United States.”

On trade, there was some clarity, at least as far as Sanders is concerned. He refused to support the new U.S.-Mexico-Canada Agreement, despite his admission that it made modest improvements over the decades-old North American Free Trade Agreement. (Steyer said he wouldn’t sign the deal because it didn’t do enough to address climate change.)

All the Democrats agreed that President Donald Trump’s trade war with China and North American allies has hurt American jobs and the rural economy — especially in Iowa, among the nation’s leading export economies.

Sanders’ back-and-forth with his colleagues revealed a rift between his economic isolationism and the rest of the field’s half-a-loaf approach.

Sanders said the deal will result in the “continuation of the loss of hundreds of thousands of good paying jobs” and stops short of addressing environmental concerns vital to his campaign.

His ideological opposite, Biden, suggested there was nearly no trade pact Sanders would support.

Warren, despite opposing U.S. trade agreements with Asia and Europe, said “we have farmers here in Iowa who are hurting and they are hurting because of Donald Trump’s initiated trade wars.”

STEYER’S BET HAS PAID OFF

He is worth more than a billion dollars but appears to own only one questionable red knit tie. But Tom Steyer, the activist who ran an investment company, made it to the final debate stage before Iowa votes. And he made his presence felt.

He used his money to fund ads in early states that raised his profile enough to clear the debate’s polling and donation thresholds. He has largely been a background presence in previous faceoffs, but Tuesday night he stood out by occupying an unusual niche — the anti-corporate billionaire.

Later, he said his children didn’t deserve government-paid-for college, effectively siding with Buttigieg’s more centrist approach on free college. But then he argued that he had been talking about a wealth tax before Warren, who’s made it her keystone proposal. “The redistribution of wealth to the richest Americans from everybody else has to end,” he said.

Asked by CNN’s Wolf Blitzer if his funding of a pro-impeachment push since late 2017 was a smart move, given that Trump is likely to be acquitted in the upcoming Senate trial, Steyer said: “Standing up for whats right is always worth it, Wolf. And I will never back down from that.”