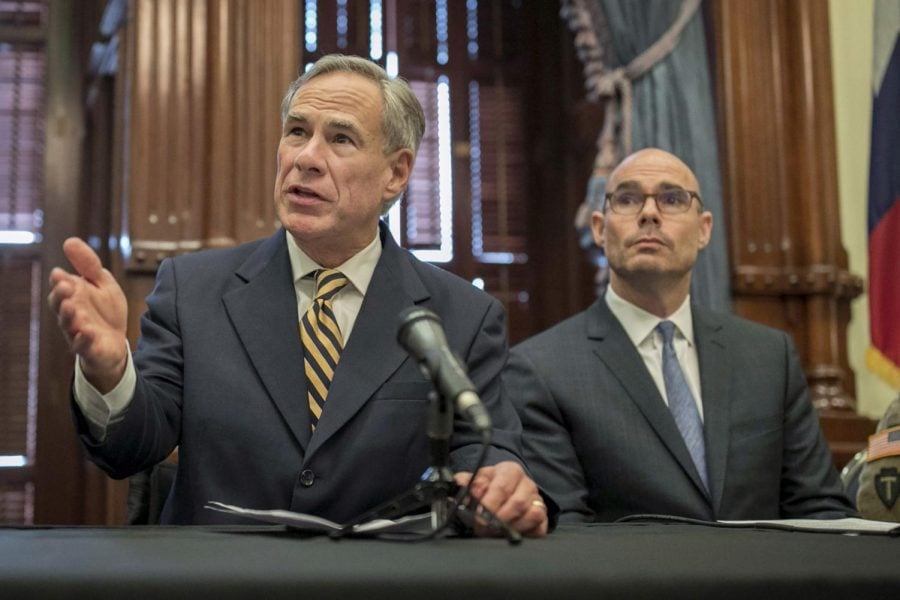 In this June 21, 2019 file photo, Gov. Greg Abbott, left, speaks at a news conference at the Capitol, in Austin, Texas. Abbott says the state will reject the re-settlement of new refugees, becoming the first state known to do so under a recent Trump administration order.

Under an executive order by President Trump, Gov. Greg Abbott announced last Friday that Texas would no longer be accepting refugees—prompting nationwide backlash.

The Sept. 2019 executive order aimed to increase involvement of local governments in the refugee resettlement process by allowing states  to place limits on—or even veto—the amount of accepted refugees. Nationwide, 42 governors have consented to allowing refugees within their states, making Texas the first known state to refuse.

Rev. Craig Mousin, university ombudsperson and professor of refugee and forced migration studies, said The Refugee Act of 1980 outlines terms for individuals to seek asylum within the United States.

“If you have a fear of persecution or have been persecuted on account of race, religion, nationality, political, pin, your social group, we will consider you for asylum as rich,” Mousin said. “We also have a separate provision of the law that allows the president each year to say we will resettle X number of refugees.”

In Abbott’s letter to the State Department, he cited financial reasons as to why Texas could not accept any more refugees.

“At this time, the state and non-profit organizations have a responsibility to dedicate available resources to those who are already here, including refugees, migrants and the homeless,” he said.

Rajit Mazumder, an associate history professor at DePaul specializing in refugee and forced migration studies, said the move was detrimental given the amount of refugees Texas has accepted in the past.

“In the last few years, Texas has taken in the second largest number of refugees only after California,” Mazumder said. “So this is a big blow to the entire world of refugees and refugee settlement in the United States.”

The amount of refugees accepted in the U.S. has drastically declined  since Trump took office. 110,000 refugees were settled under President Obama in 2017 while only 30,000 were resettled during the 2019 fiscal year. A record low 18,000 refugees are proposed to be resettled in 2020.

2,500 refugees resettled in Texas during that time period, according to Pew Research Center.

Hadiya Afzal, a junior political science major at DePaul, said the gravity of the “intensely troubling” decision is not understood because many do not understand the process of seeking refuge.

“Texas has resettled the most refugees of any state over the past few years, so this next step is intensely troubling and speaks to the pure partisanship of the decision,” Afzal said. “Most Americans don’t understand just how hard the refugee process is for anyone traveling to the United States, and the disgusting decision to switch to an “opt-in” system for states and cities is only exacerbating the resettlement crisis.”

Mazumder said the decision reflects ideas of citizenship central to the Trump administration.

While this most recent instance speaks to the current political climate, the relationship between refugees and the U.S. has always been tumultuous.

“Before 1951, the term didn’t exist as a legal category so each country was free to do what they wanted,” Sharma said. “The US kept out many groups fearing disease or from not wanting people from certain countries. Until 1943, they refused to accept Jews from Europe. When ships full of Jewish refugees docked in NY they were sent on to South America.”

Mazumder said that while attitudes towards refugees has fluctuated in the past, recent instances of antipathy appears to be a part of a more troublesome trend.

“The recent antipathy towards refugees in particular, especially against refugees of color, especially those coming across the southern borders as a very specific kind of background to it in the sense that it seems to be part of a greater kind of wolf whistle to white racism in the country,” Mazumder said.

On Wednesday, U.S. District Judge Peter Messittee issued a preliminary injunction, temporarily blocking the Trump administration from enforcing the executive order.  Mousin said it is important to understand what the injunction means, as enjoining an order in an emergency does not permanently overrule it.

“If you don’t issue the injunction, the harm is going to happen and we won’t be able to fix that harm,” Mousin said. “So it stops it from going into effect, let the case continue and then you decide over here whether it’s should be overruled or not.”

The administration didn’t immediately comment on whether or not an appeal will be made regarding the decision.

Mousin said the backlash to the order has created ‘some signs of hope’ for future attitudes toward refugees.

“I feel very strongly that this administration’s opposition to refugees has helped fuel a climate that’s for some people,” Mousin said. “It makes it easy to be anti-refugee, I should say. There’s also some signs of hope that it’s also engaged more people to realize that we should be more hospitable refugees. So it’s sort of a backlash to this is also happening and seeing more student groups, church groups, other groups looking for ways to be more hospitable to refugees.”