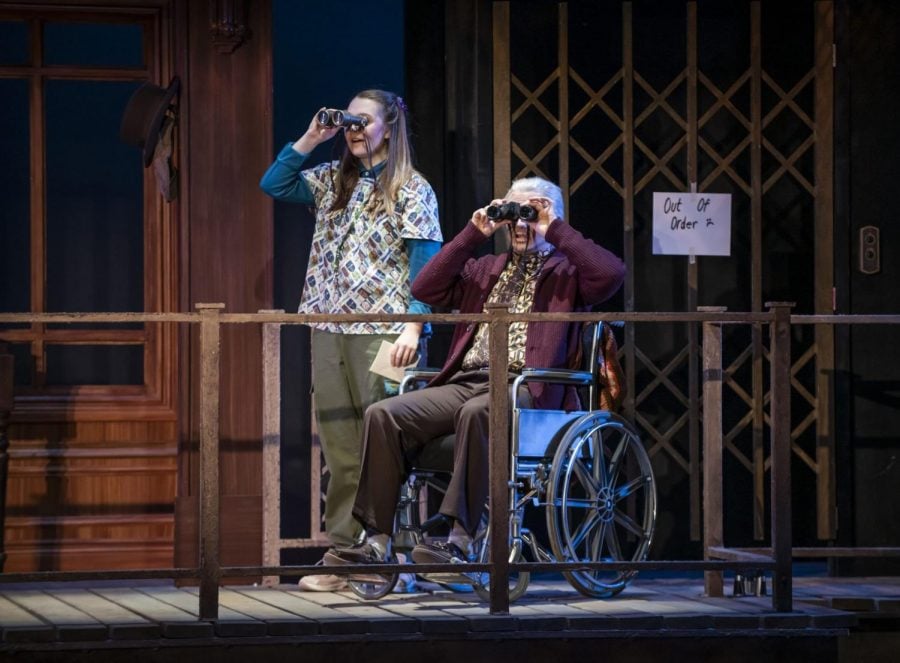 The DePaul Theater School showcased the production of “Brooklyn Bridge” on Saturday, Dec. 18, presented by Chicago Playworks for Families and Young Audiences.

“Brooklyn Bridge” starts its tale with 10-year-old Sasha as she attempts to write a book report on said bridge. Sasha knows every fact about the bridge and often describes herself in “awe” of the great architectural feat. The only problem is, the book report is due tomorrow, and Sasha doesn’t have a pen. Thus the audience is taken with Sasha on her adventures through her apartment complex to find a pen.

With the help of her eccentric neighbors, Sasha explores her community only to find more questions than answers. As the pen begins to unveil itself as procrastination, Sasha has to confront the real reasons for her inner turmoil.

Despite portraying itself as a children’s story, audiences might be surprised by the emotional depth of Sasha’s journey. She discovers that there is a community out there willing to help as long as you’re willing to look for it.

“Brooklyn Bridge” is a part of the Playworks Series, a partnership between DePaul University and Chicago Public Schools. According to Stage Manager Dana Beech, the Playworks Series brings in students every Tuesday and Thursday to see plays which Beech says are “often the first time seeing a theatrical production for CPS students”. On the opening night of “Brooklyn Bridge,” January 16, the Merle Ruskin theater welcomed 768 public school students.

Beech adds that part of what makes “Brooklyn Bridge” unique is the representation of its key audience. “The play gives different students of different age levels the opportunity to see people like them reflected on stage,” Beech said. ”They see someone dealing with a lot of certain situations that they also might be dealing with either at school or at home.”

As Sasha’s situation becomes less about a pen and more about her identity, children might find comfort in seeing another young person struggle with the same issues they face. Children experience a range of complex and different emotions, from internal cultural conflict to abandonment and separation anxiety.

Kamari Saxon, who played Sam, one of Sasha’s quirky neighbors, believes that it is crucial for students to see “Brooklyn Bridge.”

“This is really important because this is where most societal things, that we as adults struggle with, begin,” he said. “It begins in childhood and it’s in the things that we watch.”

After watching the play, children will not only walk away feeling seen, but hopefully knowing that they have it within themselves to find a community for help.

“Brooklyn Bridge” is playing through Feb. 22 at the Merle Reskin Theater.