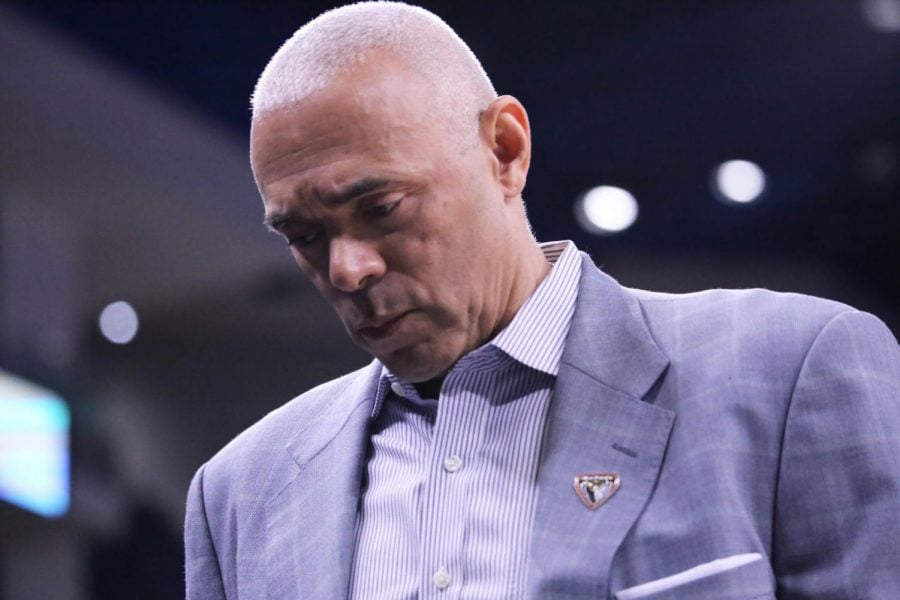 After going 12-1 in the nonconference portion of their schedule, the buzz surrounding DePaul was the highest it has been in over a decade. Since the start of league play, however, the Blue Demons have failed to build on that momentum — with only one win in the first six games. But there was still a slimmer of hope that DePaul could turn their fortunes around in the Big East when they hosted St. John’s on Saturday at Wintrust Arena.

After Saturday’s game, however, that buzz is officially gone. DePaul had no answers for the Red Storm and came away with a 79-66 loss — sinking their record to 13-7 on the season and 1-6 in the Big East.

“Not really happy with today and what we have been doing, how we have been performing,” DePaul Head Coach Dave Leitao said. “Just trying to figure out a way collectively, individually to turn the tables and get back to a place where we were playing really good basketball.”

After giving up 10 3-pointers against Creighton, DePaul knew they had to do a better job of defending that area of the floor. Instead, they allowed the worst 3-point shooting team in the Big East — St. John’s — to go 13-of-32 from deep on Saturday. The Red Storm’s LJ Figueroa had a career day against DePaul, scoring 28 points and making seven 3-pointers to help his team pick up their second conference win of the season.

“He was aggressive,” Leitao said. “He was aggressive when he caught the ball and found some openings in the transition and in the half-court. Hit your first or two shots and you feel better, and so he did, led to the seven that he hit.”

DePaul, on the other hand, struggled again from the 3-point line, only going 4-of-25 from behind the arc. The Blue Demons also had a tough time hitting free throws on Saturday, hitting only 22-of-34 from the charity stripe.

While the end of the game didn’t go how DePaul envisioned, the start of the game was promising from a Blue Demons perspective. The home team hit five of their first seven shots, with four of them coming from assists. Senior guard Jalen Coleman-Lands opened the scoring for DePaul with a 3-pointer, but went 2-of-9 the rest of the way from beyond the arc.

DePaul’s defense was energetic from the tip, forcing the Red Storm into six missed shots in the first five minutes. Through their defense, DePaul was able to get out in transition and get good looks at the basket. By the first media timeout, DePaul had built a slim 12-8 lead through a balanced scoring effort from their starters.

After getting up 18-13 with 11:38 to play in the first half, the Blue Demons went cold from the field. In the next seven minutes, DePaul failed to make a field goal and allowed St. John’s to take a lead.

“The game has an ebb and flow to it,” Leitao said. “So, there’s going to be some runs by both teams, which is what we are trying to find throughout the first part of the game, some consistent to what we had talked about doing. So, there were stretches where we thought we were doing things well, and we didn’t do it as much as we needed to.”

The only points DePaul scored from the nine-minute mark to the five-minute mark was two free throws from junior forward Jaylen Butz, who returned to the lineup after missing Wednesday’s game with the flu. St. John’s, on the other hand, hit three 3-pointers and took a 29-23 before the Blue Demons were able to hit another field goal.

Following the intermission, DePaul once again came out sluggish and didn’t look nearly as prepared as St. John’s was going into the second half. The Red Storm, who hit seven 3-pointers in the first half, started the next half with another make to give them a 37-34 lead.

“You got to stay the course,” Leitao said on the team’s poor 3-point shooting in their last two games. “Things are going to go good and a lot of things are not going to go good. I don’t think you can variate from the consistency of how you go about your business and how you prepare, whether it’s shooting or anything else. So, that’s what we are going to continue to do.”

Junior forward Paul Reed, who finished the game with 15 points and 12 rebounds, scored four straight points for the Blue Demons to give them a 38-37 lead with 17 minutes to play — but that would be the last time DePaul held a lead in the game.

Figueroa kept torching the Blue Demons in the second half, he would give his team back the lead with a layup and hit important shots late in the game to keep DePaul at bay. After the Red Storm took a 41-38 lead, their 3-point shooting put DePaul in an even bigger hole. Rasheem Dunn and Mustapha Heron hit three consecutive shots from behind the arc to give their team a 50-40 lead with 13 minutes to play

“I think there’s a connection,” Leitao said. “If you know the connection in basketball that good offense leads to good defense, good defense leads to good offense, and we’ve got to be able to make those two work. Normally, in games go on we play solid defense, but then it slips sometimes when the offense isn’t working and sometimes vice versa. So, we got to be able to manage both of those.”

St. John’s then took their largest lead of the game to that point, 55-44, but that’s when the Blue Demons began climbing back into the game. Junior guard Charlie Moore scored six straight points and Reed added in a free throw to get DePaul back within three, 56-53, but that was the closest the Blue Demons would get to St. John’s

“I made six straight points, just trying to give the team some energy to get back in the game,” Moore said. “Somethings happened that was out of our hands, a couple of loose balls that got back, knocked down some 3-pointers.

The Red Storm continued knocking down shots the rest of the game, led by Figueroa — who added another seven points towards the end of the game. St. John’s took an 11-point lead with less than two minutes to play, and DePaul didn’t have any other answers from that point.

Moore finished the game with 20 points, seven rebounds and five assists, while Coleman-Lands added 15 points on 5-of-13 shooting. Reed, Moore and Coleman-Lands combined for 50 of the team’s 66 points on Saturday.

The loss sinks DePaul into last place in the Big East at 1-6, and gives St. John’s a season sweep over the Blue Demons

Moore expressed frustration after the game, but said the team needs to come together and figure out how to get back on track — starting with their next game on Wednesday at Seton Hall.

“A little frustrating,” Moore said. “But the team just talked about coming together, see what we have to do to come out with wins at the end of the day. So, just focus on getting better.”