DePaul event encourages attendees to rethink perceptions of drug use 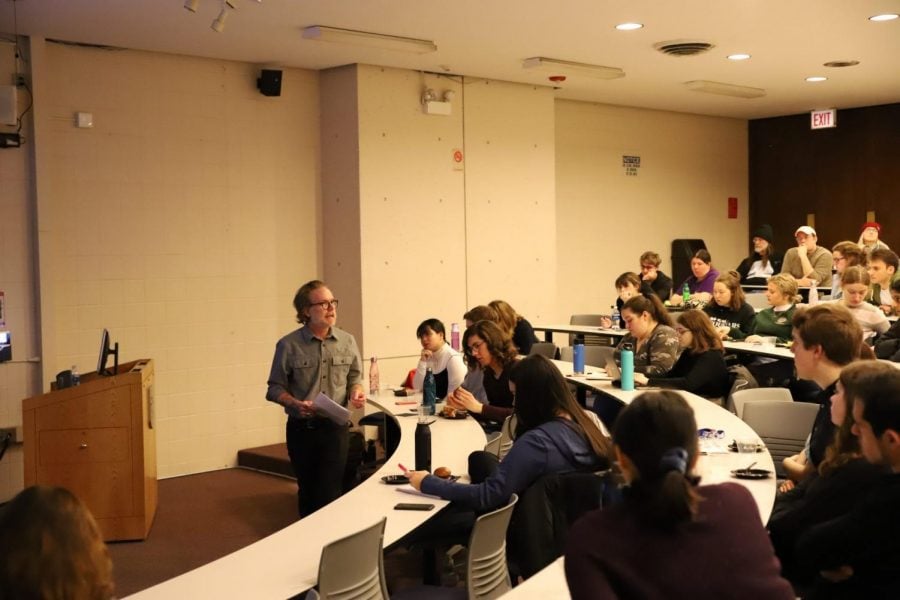 “It’s not about getting people to stop,” said DePaul sociology professor Greg Scott, who organized and gave the lecture on the narrative surrounding drug usage. “It’s about meeting people where they are.”

Legalization of cannabis in Illinois after decades of criminalization has spurred many to rethink their perceptions of drug use.

DePaul University sociology professor Greg Scott offered a space for this evaluation in an open lecture on drug user advocacy this past Friday, Jan. 24.

His lecture, titled “They Talk, We Die: Drug user Advocacy as a Human Liberation Movement,” asked a room packed with students to question their understanding of drug use and users – how their perceptions formed and who controls the narrative.

Scott specializes in the study of drug-related issues and has been actively involved with ongoing drug user activism for over a decade.

He currently works as the director of drug checking for the Chicago Recovery Alliance and was influential in passing a 2019 bill  that allows for testing of illicit drugs for specific contained ingredients – specifically fentanyl, a synthetic opioid most commonly involved in drug overdose death in the U.S., according to the National Institute on Drug Abuse.

The talk aimed to highlight the work of drug users who Scott feel have been influential in shaping a changing societal response to drug use.

It’s those who have been demonized for their own drug use, Scott said, that have taken charge of liberating ideas and concepts from those in power to make them available for their own communities.

This liberation has saved lives.

Drug overdose is the leading cause of injury-death in the U.S., according to the Center for Disease Control. There were 70,237 drug overdose deaths in 2017, up 9.6 percent from the previous year.

The Chicago Recovery Alliance helped pass a law in 2010 that made Naloxone, a drug that works instantly to reverse the effects of opioid overdose, free and legal without prescription in Illinois. Since its passage, the CRA has received over 20,000 reports of overdose reversal.

This year’s topic of DePaul’s Honors Speaker Series is the discussion of silent populations – giving a voice to populations who don’t traditionally receive one.

The silence of drug user communities comes from decades of America’s failed and misguided War on Drugs that painted drugs as America’s number one enemy, Scott said.

The criminalization of drugs and the crafting of the issue into a moral dilemma built a society-wide aversion to drug users, Scott said. From there, users were isolated and ignored under the guise that they couldn’t, and shouldn’t, be helped.

“American society is very moral-oriented,” said Martha Martinez-Firestone, the director of DePaul’s Honors Program. “Everybody wants to do what’s right but sometimes that makes you judge others too harshly.”

“It’s not about getting people to stop,” Scott  said. “It’s about meeting people where they are.”

This rejection of abstinence, which the CRA found unsuccessful, resonated with audience members.

“A lot of of organizations focus on the cold turkey method of ‘just get off drugs’ as though it’s very simple,”  freshman Cindy Hernandez said, “But [harm reduction] is more realistic.”

Scott is a proponent of drug advocacy beyond legalization, calling for empathy and understanding.

“Drug use is normal, and we shouldn’t be punishing normal human activity,” he said.