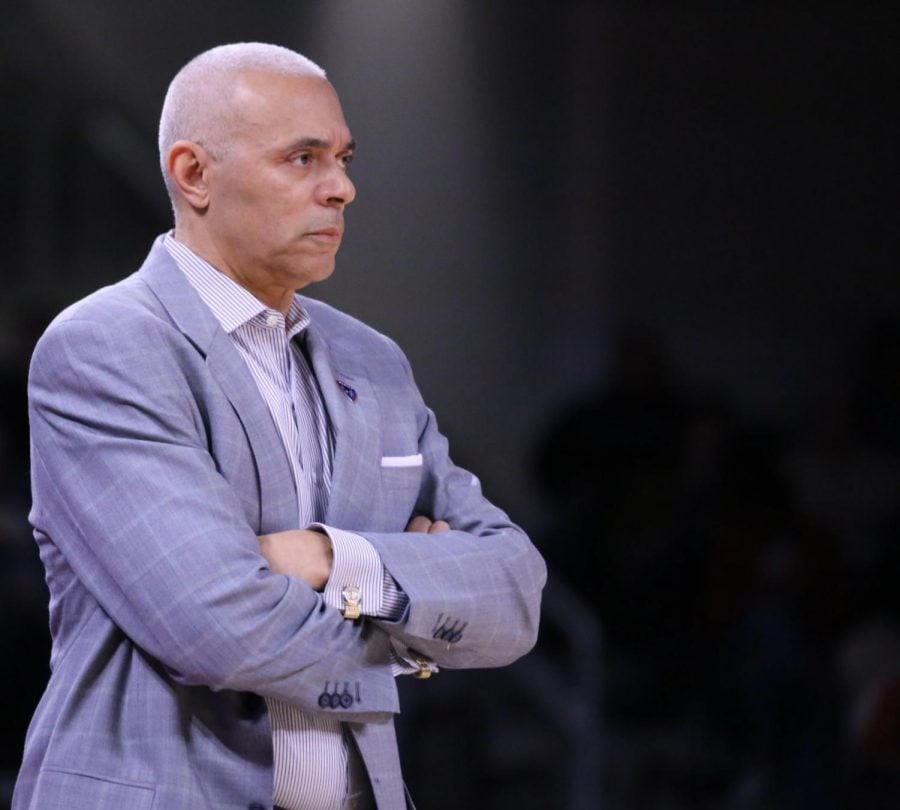 DePaul head coach Dave Leitao watches his team give up 13 3-pointers against St. Johm’s on Saturday at Wintrust Arena. The Blue Demons lost the game 79-66.

In DePaul’s second meeting with St. John’s, things were different from the first. Not the result, as DePaul fell to St. John’s for the second time this year after a 79-66 loss on Saturday. Instead, St. John’s nailed 13 three-pointers this time around and shot the lights out of Wintrust Arena.

Getting swept by St. John’s puts DePaul in the last place spot of the Big East with a game in hand. Sitting at 1-6 in conference play, it will be a steep climb to claim  a higher seed prior to the Big East Tournament.

It was just two weeks ago on Jan. 11 that the Blue Demons dropped a 74-67 road game to St. John’s at Madison Square Garden. In that game, St. John’s, who shot just 30 percent from deep as a team this season, hit 6-for-19 from beyond the arc.

On Saturday, it seemed like St. John’s was hellbent on shooting as much as possible. In the first matchup between the two teams, guards Mustapha Heron and LJ Figueroa both got into foul trouble, keeping them out of the picture. In Saturday’s rematch, the two were clinical on offense.

Figueroa made seven threes on a career day where he finished with 28 points. A few daggers in the second half helped shut DePaul down and keep the Wintrust crowd silent. When DePaul got within a couple of points late in the second half, Figueroa hit a corner 3-pointer that put his team back up eight and effectively ended any comeback hopes for the Blue Demons.

The change from game one to game two of the series was apparent for St. John’s. For DePaul, on the other hand, it was the same story of poor free-throw shooting and an inability to defend the 3-point shot.

“It’s just adjustments,” DePaul head coach Dave Leitao said after the game. “Trying to figure out how and why you can get better. First, Don’t repeat some of the things that you did the first time and two, do some things better.

DePaul did improve in some areas in the second matchup. The Blue Demons forced twice the amount of turnovers and committed six fewer themselves, while shooting better from the free-throw line.

Overall, DePaul’s offense continued to struggle, as they shot 30 percent from the field on Saturday and 4-for-25 from deep. With the contrast in shooting, where the Red Storm hit 40 percent of their threes, long runs ruined the Blue Demons in the second half where they had to start fighting from behind early.

St. John’s is known for its ‘40 minutes in hell’ approach to defense. Their four-guard starting lineup presses teams and tries to disrupt them.

“They pick up 94 feet, and they come with a trap or two,” guard Charlie Moore said. “Just a different type of pressure, they switch it up a lot.”

On top of the pressure on guards, there isn’t any breathing room in the paint either. It seemed like each time junior forward Paul Reed touched the ball, he got doubled-teamed immediately. He and fellow forward Jaylen Butz got a combined 17 free throw attempts as they were hounded in the paint. Reed’s five turnovers were a team-high.

Being able to disrupt teams with bigger players isn’t an easy thing. But St. John’s did a great job of forcing turnovers on every part of the court. There was no weakness in the Red Storm’s defense for DePaul to take advantage of.

In DePaul’s starting lineup, only Moore and Jalen Coleman-Lands took more than two three-pointers. Reed, Butz and Romeo Weems shot just three combined shots from deep. Not every player needs to shoot a high volume from deep, but when the threat of the 3-point shot isn’t present, the offense can get stagnant.