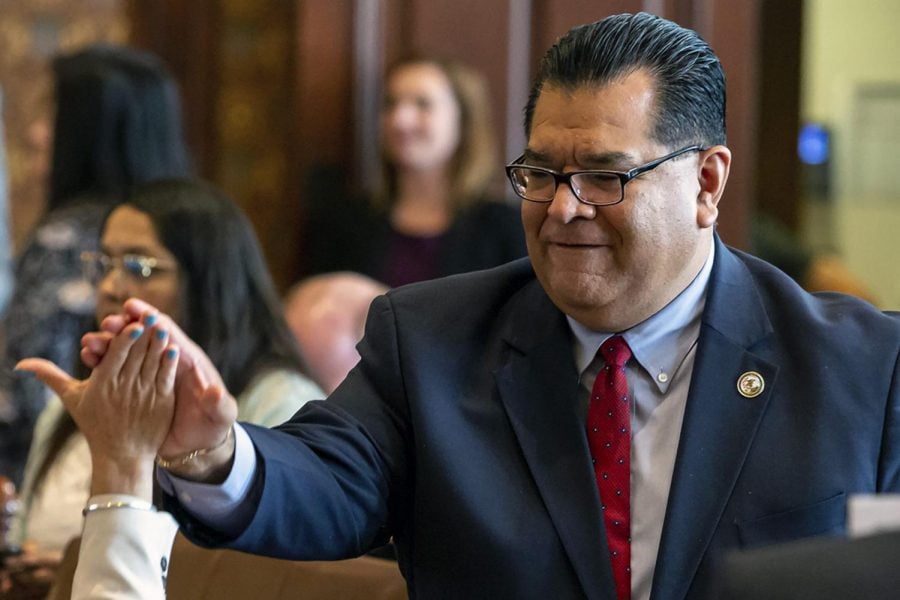 In this June 2, 2019 file photo Illinois State Sen. Martin Sandoval, D-Chicago, at the Illinois State Capitol, in Springfield, Ill. Sandoval was charged in federal court Monday, Jan. 27, 2020, with bribery and filing a false tax return stemming from his support of the red-light camera industry when he was head of the state's powerful Transportation Committee.

The U.S. attorney’s office in Chicago listed the charges against Sen. Martin Sandoval in a two-page filing in U.S. District Court. The 56-year-old Chicago Democrat “corruptly solicited, demanded, agreed to accept and accepted” payments for “continued support for the operation of red-light cameras in the State of Illinois,” the document says.

The alleged bribery occurred between 2016 and 2019, when, as chair of the transportation committee, Sandoval wielded enormous influence in how state transportation funds were spent.

The prosecutors’ filing offers few details, including what company or companies may have been involved, or the specific value of any bribes.

Agents raided Sandoval’s office in Springfield, his office in Chicago and his home on Sept. 24 amid still-active federal investigations of public corruption that have ensnared multiple Democrats.

Sandoval also was charged with a count of filing a false tax return. It accuses him of misstating his income in a 2017 return when he indicated he made around $125,000. His income “substantially exceeded that amount” and Sandoval knew it, the filing says.

After it became clear in the fall that Sandoval was an investigative target, he announced his resignation, effective Jan. 1. Sandoval had represented the 11th District since 2003.

Sandoval was a driving force behind an increase in the gas tax to help fund Democratic Gov. J.B. Pritzker’s $45 billion capital construction plan to rebuild roads, bridges and schools.