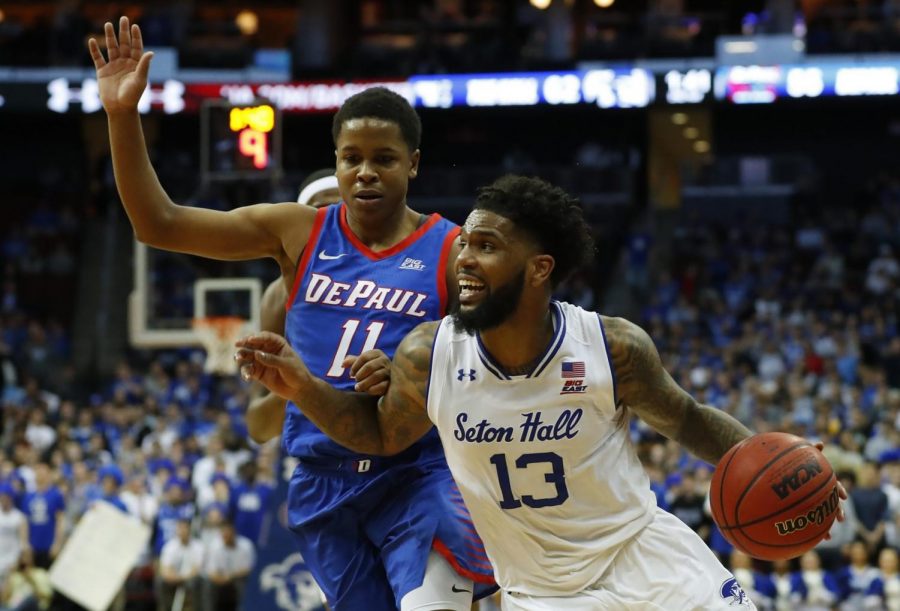 Seton Hall's Myles Powell drives past DePaul junior guard Charlie Moore in the second half on Wednesday at the Prudential Center.

After nearly pulling off a win against Seton Hall on Dec. 30 to begin Big East play, DePaul had another upset brewing on Wednesday when they took on the Pirates at the Prudential Center. But like their first meeting, where the Pirates closed the game on a 9-0 run to win 74-66, the Blue Demons gave away another lead late in the second half to lose 64-57 for their seventh Big East loss of the season.

In their first meeting of the season, DePaul had a 66-65 lead with over two minutes to play — but Seton Hall’s Myles Powell put his team on his back late in the game to escape Chicago with a win to begin conference play. The same story unfolded when the two teams met on Wednesday, with the Blue Demons holding a lead throughout most of the second half and failing to get the job done at the end.

The start of the game, however, was rough for DePaul as they saw Seton Hall race out to an early 17-6 lead after hitting three 3-pointers inside the first nine minutes. Defending the 3-point shot has been an issue for DePaul over the course of league play this season. In their last two home games, DePaul gave up 23 3-pointers in two losses to Creighton and St. John’s.

Seton Hall clearly made that a point of emphasis early in the game, as they attempted 18 3-pointers in the first half but only made four of them. After a hot start from the Pirates, the Blue Demons began clawing their way back into the game. Sophomore Darious Hall provided a much-needed spark off the bench in the first half, the forward had five points and four rebounds after the first 20 minutes.

Senior guard Jalen Coleman-Lands began cutting into the Pirates’ lead by knocking down DePaul’s first 3-pointer with nine minutes to play in the half. Coleman-Lands alongside junior Charlie Moore helped carry DePaul in the first half with 15 combined points, and oversaw a 19-7 run to close the half. DePaul’s defense forced Seton Hall into tough shots late in the first half, and held the Pirates scoreless for nearly the final four minutes of the half until Anthony Nelson hit a jumper at the buzzer. Even though Seton Hall made more field goals and 3-pointers in the first half, DePaul held a slim 29-28 lead because of their 10 made free throws.

Coming out of the break, DePaul built on their momentum with an 8-2 run in the first four minutes of the half. Coleman-Lands and Moore hit back-to-back 3-pointers to give the Blue Demons a 39-30 lead.

The Pirates, however, kept coming back at DePaul through their stellar play on offense and forcing turnovers on defense. After the Blue Demons got up 41-32 with 15:30 to play in the game, Seton Hall forced four turnovers and got back within one of DePaul.

DePaul was able to maintain their lead the next couple minutes by trading baskets with the Pirates, Hall and freshman Romeo Weems scored five straight points for DePaul and had their team up 48-43 with 10 minutes to play in the game.

But that’s when the momentum began swinging back to Seton Hall and their boisterous crowd. After a dunk by freshman Nick Ongenda put DePaul up 50-46, the forward got called for a technical when he threw the ball back to Seton Hall player. The Pirates only made one free throw, but also got the possession and converted on a layup. Butz also got handed a technical during the second half that resulted in free throws and possession for the Pirates.

Following a made free throw by Moore to put his team up 51-49 with under seven minutes to play, Powell took the game over and crushed the Blue Demons’ hopes of upsetting Seton Hall.

The star guard tallied off nine straight points, put his team up 58-51 with 4:31 to play and virtually sunk DePaul to another Big East loss.

The Blue Demons’ offense from that point went ice cold, only scoring six points in the final four minutes and only making one of their last 10 shots. The Pirates only shot 14-of-29 from the free-throw line and 22 percent from the 3-point line, but through their experience of closing out tight games, Seton Hall improved to 8-0 in conference play while DePaul dropped to 1-7 in the Big East.

The referees called 47 fouls throughout the game, and the teams only combined for 41 made field goals in 40 minutes of action. Junior forward Paul Reed, who leads DePaul both in scoring and rebounding this season, finished the game with six points on 2-of-7 shooting and seven rebounds. Coleman-Lands and Moore were the only two DePaul players to finish in double-figures, with two duo combining for 24 points on the night.

The Blue Demons now sit at 1-7 in the Big East, and will get two days off before they travel to face Marquette on Saturday at the Fiserv Forum.