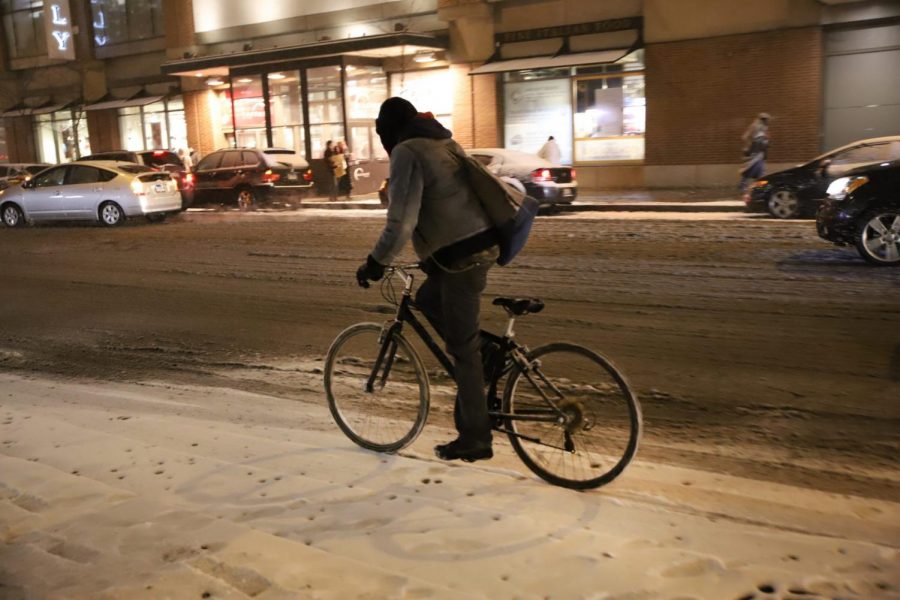 It is a cold winter morning as a bicyclist speeds toward Jackson and State. As the light turns red, the bicyclist hits the brakes, but the bike abruptly falls and skids down the street.

“I went straight down and slid from 50 feet in front of the intersection all the way through the intersection and ended up right outside the door to my job,” said Seth Horning, an academic adviser at DePaul’s College of Communication. “I slid probably like 300 to 400 feet because it was so slick and so icy.”

Thankfully, the black ice that caused him to slip also protected him from injury as he was relatively unscathed other than bruises on the left side of his body.

As the weather in Chicago deteriorates and the snow and ice start to accumulate, bikers will have to become more careful. However, while the weather leads some to opt for different methods of travel, experienced bikers continue to keep to their habits and provide evidence that winter is not a deterrent to biking.

Horning has been biking to and from DePaul for the past 11 years from Brighton Park on the Southwest Side of Chicago. He spoke about some of the issues and dangers of biking.

“It’s not if you get into an accident; it’s just when,” he said. “I’m lucky to have never been hit, but I have had a lot of close calls.”

Horning continued, saying that some of the main issues he has had is when cars try to speed past him to take right turns, which is dangerous for bikers since they cannot brake quickly. He also mentioned that it can be dangerous when people open doors.

Matt Moy, another Chicagoan who resides in Pilsen and makes routine bike trips to Avondale and the Loop, also discussed some of the dangers of biking.

While it can be dangerous to bike regardless of the season, Moy argued that being smart and staying safe can decrease the chance of injury greatly. He also said it can be a better idea to be defensive especially in the cold.

“I sometimes try to bike a little slowly,” he said. “Especially in the cold. Wearing layers helps and just being cautious around other drivers.”

“I’ve been biking for a long period of time, so I have a good grasp of the dangers as well as my own ability,” he said. “It’s important if you don’t know about something to be as safe as possible. Don’t try to skid on the ice because it might seem fun…until a car runs you over.”

Pediatric cardiologist David Theole, an avid biker who routinely bikes from Wrigleyville up to Advocate Lutheran in Park Ridge, spoke of the false narrative that people shouldn’t bike in the winter.

“People have this idea that you can’t bike in the winter, but it’s not true,” he said.

Theole identified a few of the issues that can arise during the winter and certain precautions that bikers can take.

“The biggest danger I see is visibility,” he said. “A lot of bicyclists are invisible. I recommend a reflective vest and a brightly colored jacket.”

One of Theole’s patients, a police officer, told him that when drivers hit bicyclists, the first thing the driver says is they could not see him. Therefore, Theole stresses reflective gear can be one of the more preventative measures bikers can take.

“Main thing to be cautious for is wind,” he said. “It cools you off faster, making you more susceptible to frost bite. Fingers are the most exposed.”

Along with fingers, it is ideal to cover up ears and exposed parts of your face. In Horning’s experience, lightly covered ears in subzero temperature can lead to frost bite, which he realized during the polar vortex of 2019, when he biked to campus, sustaining frost bite on his ears.

Although there is some risk to biking in winter, Horning said he will continue to bike regardless. He even said students cannot miss class due to bad weather since he will be biking to class throughout the winter quarter.