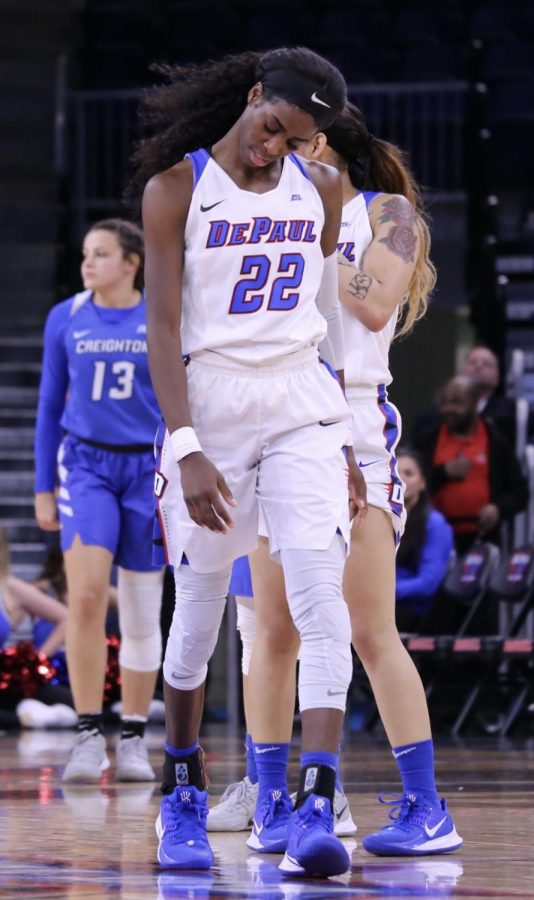 DePaul senior guard Chante Stonewall looks down during the second half against Creighton on Friday at Wintrust Arena.

DePaul entered their matchup against Creighon on Friday at Wintrust Arena rocking a 10-game winning streak, a perfect 9-0 in the Big East and winning those games by an average of 14.3 points per game. So, it is fair to say that the Blue Demons felt confident heading into their second matchup against Creighton this season.

But the BlueJays had other ideas on Friday. After trailing 41-21 going into the break, Creighton blitzed DePaul in the second half by outscoring the Blue Demons by 22 and winning 63-61 — giving Doug Bruno’s team their first conference loss of the season.

“It’s a great day to be a Bluejay,” Bruno said after the game. “I’ve been telling our players all year that we’re good enough to beat anybody and we’re good enough to be beaten by anybody. We came out [in the second half] totally beat upside the head, just like we beat them upside the head in the first half. We did not make stops. We couldn’t make layups … So, there’s a lot of reasons this happened tonight, and it’s obviously a disappointing loss.”

DePaul went into the break completely outplaying the visitors, shooting 50 percent from the field, while the Bluejays made only five field goals in the first half. The Blue Demons began the game scoring the first 11 points before the Bluejays could even blink. It took Creighton four minutes to register their first points before Olivia Elger hit a 3-pointer to put her team on the board.

But the Blue Demons kept the onslaught coming in the first quarter, both on defense. The Bluejays would only score two more points in the final six minutes, while DePaul added another nine before the end of the quarter. Behind seven points each from Chante Stonewall and Lexi Held, DePaul took a 20-5 lead into the next quarter.

Creighton began the second quarter by knocking down three 3-pointers in the first three minutes, cutting DePaul’s lead to only nine points, 24-15. But the Bluejays failed to build off of that momentum, as the Blue Demons responded with a 12-0 run in the next two minutes to increase their lead to 36-15. During that run, junior guard Dee Bekelja powered her team with seven points.

DePaul closed the first half by trading a couple of baskets with Creighton, and taking a 41-21 lead into the break. After watching how the first 20 minutes went, it was hard to see how the Bluejays could make this game competitive — let alone coming back and winning the game.

That’s why they play the games, however.

Creighton opened the second half like an entirely new team, they outscored DePaul 20-2 in the first eight minutes and had the deficit all the way down to five. DePaul, on the other hand, couldn’t buy a basket or a cohesive offensive possession. During that 20-2 run for Creighton, DePaul made one field goal and gave the ball away five times.

“The first five minutes of the second half are crucial to basketball games and if you let people play with you, they are going to play with you,” Bruno said. “And we came out at halftime and let them play with us. We didn’t guard them, they scored five quick ones. And then we come down the other end and just not focused. We have a very talented group of players here, but if you are going to be a high volume taker you better be a high volume manufacturer. I look at this stat sheet and there’s a couple of players that are six from 24 together.”

The Blue Demons were able to regroup in the final few minutes of the third quarter, knocking down one shot and hitting four free throws to take a 49-46 lead into the final quarter.

But there was no quit from the visitors, they kept attacking on offense and shutting down DePaul on defense. After the first minute of the fourth quarter, Creighton had completed the 20-point halftime deficit and had tied the game at 50. The pressure kept coming from them, led by Elger’s 16 points in the second half, the Bluejays would take a 53-50 lead with 5:48 to play in the game.

Held, who is the current Big East Player of the Week, responded on the next DePaul possession with a 3-point play to tie the game at 53. But Elger came right down the floor and knocked down her seventh 3-pointer of the game to give her team a 56-53 lead. Following that, DePaul’s offense simply had no answer for Creighton, and was not able to get tie or take another lead.

The Blue Demons did have hope, however, in the final nine seconds after sophomore guard Sonya Morris blocked Elger’s shot to keep the game at 63-61. But DePaul failed to come up with a good play, even after a timeout from Bruno, as senior guard Kelly Campbell got blocked at the rim trying to tie the game.

“The last play of the game was called before the timeout,” Bruno said. “I didn’t want to call a timeout, we called something to run, if we make a stop here’s what we’re doing. So, when we made the stop, we had a play that was not run. I had to call the timeout as nine seconds, not because I wanted to, but because we didn’t run what we specifically knew how to run.”

DePaul shot 4-20 from the 3-point line in the game, their lowest makes from beyond the arc this season. The Blue Demons, who are near the top in assists per game in the country this season, only registered eight assists on 23 made field goals.

Bruno’s team will be back in action on Sunday when Providence visits Wintrust Arena. Earlier in the season, DePaul defeated the Friars 80-67 on the road.