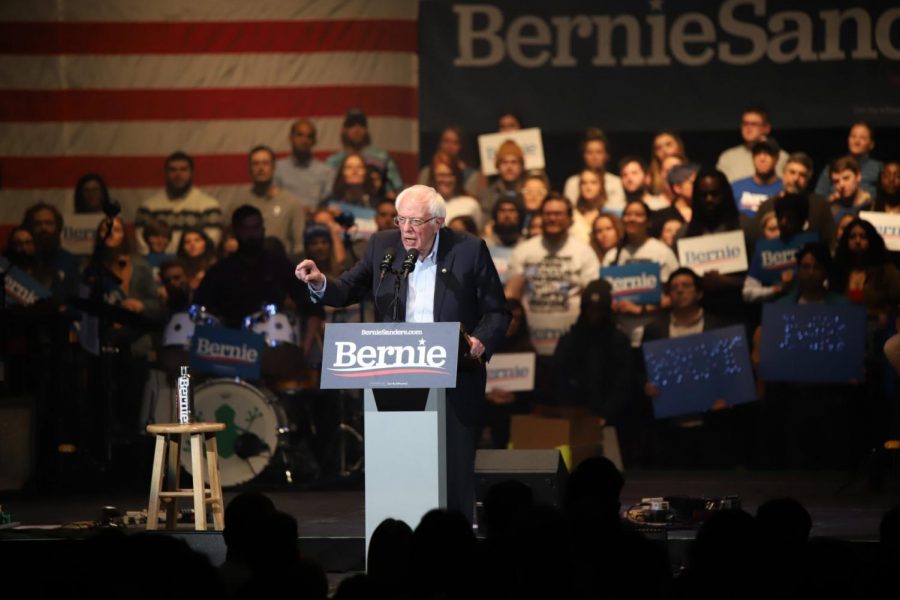 Democratic presidential candidate Bernie Sanders speaks during a rally two days before the Iowa caucus in Cedar Rapids on Feb. 1, 2020.

CEDAR RAPIDS, IOWA —  As Vampire Weekend plays to a thinning crowd of Bernie Sanders supporters in Iowa, a young black girl who couldn’t be a day older than 10 dances among the crowd, unaware of the political moment she’s standing in the center of.

She connects with the young adults around her, blissfully ignorant to the power they hold – for they will vote in this election, a vote that will undoubtedly shape her future.

On Saturday, Sanders left D.C. and the impeachment trial of President Donald Trump to attend the Bernie Caucus Concert with Vampire Weekend.

Sanders himself went through a compilation of what have become his “greatest hits,” repeating plans  for the erasure of student debt, an agenda to combat climate change and to rid American politics of corruption and greed.

“We are taking on the entire political establishment,” he said. “We’re taking them all on.”

To the naked eye, the crowd had a large population of Millennial and Generation Z voters, with many expressing excitement for voting in a presidential election for the first time.

Madison Broaden, 20, and Tajai Carrasco, 18, are both students at Coe College in Cedar Rapids. They said Sanders’ emphasis on climate change as well as his consistency as a candidate appeals heavily to them.

“I don’t think any other candidate is actually talking about climate change,” Broaden said. “And if we’re talking about our future, if we don’t fix this now, we won’t have a future to begin with.”

“How genuine he is and the fact that he believes so strongly in equity and not equality is amazing,” Carrasco said. “Because you could give everyone 100 dollars, but everyone doesn’t have the same situation.”

Some traveled to Iowa from out of state in support of Sanders and his campaign.

David Marques is a 22-year-old student at the University of Chicago. He traveled to Davenport to canvas for Sanders and then later Cedar Rapids to further show his support and see Vampire Weekend perform.

“I feel like maybe [Sanders] could be a little more forceful in his campaigning,” he said. “I noticed he has a tendency to not really go negative against other candidates, which is an admirable quality, but sometimes it gives off the impression that he’s a little bit not fully in the game.”

Despite a large population of younger voters, the speakers seemed more tailored towards an older generation, with clumps of teenagers spotted sitting off to the side throughout the night.

While the crowd was full of fervent Sanders supporters, not everyone in attendance was fully convinced of his campaign.

Michelle Ajram, 55, of Cedar Rapids, voted for Hillary Clinton in the 2016 election in both the primary and general election and still held some reservations regarding Sanders while attending the rally.

“I came tonight just to see what was going to be said, how it was going to go, I’m still honestly thinking what direction I want to go in,” she said. “The main thing is, I do believe that we need to take care of the people in this country. When we talk about healthcare, we didn’t get far enough with Obama’s plan for affordable healthcare for all, maybe there’s an option, maybe people are tired enough to say ‘this is what we need to do.’”

Ajram said she also was unsure of how Sanders could enact his goals in a four-year timeframe.

“It’s nothing about his campaign that’s lacking, it’s just thinking about the long-term that we want someone that can go the long haul,” Ajram said. “Four years is great, eight years is better if you are going in the right direction. And it takes time to get some of these things accomplished so that’s where the long-term is important. And it’s age, it’s some of those things that people talk about that we think ‘Ok, is he going to be able to do it for the long haul?’”

A couple of voters walked into the Sanders rally later than most, adorned with stickers and pins from all of the major campaigns in the race.

Mary Callahan has a lifetime of experience with caucusing in Iowa, whereas her friend Lynne Burke traveled in from Wisconsin to get an unimpeded first look at the Democratic candidates.

This rally, and caucus weekend as a whole, is the last chance to make up their minds, they said. After spending time with the Buttigieg campaign early in the day, they ended the night with Sanders. After Sanders spoke, they declared they were “back with Bernie.”

“You can’t deny the enthusiasm, the energy,” Burke said. “I think this country is ready for a revolution.”

Sanders took the stage towards the end of the evening, addressing a few thousand supporters, by his account.

President Trump was at the forefront of many of Sanders’ talking points, referring to him as “the most dangerous president in modern history.”

“I don’t want anyone fainting,” he joked. “The Sanders administration will believe in science.”

Sanders continuously referenced the importance of Monday’s caucus, imploring voters to come out in support of his campaign.

“This is the most monumental election in American history,” he said. “The whole world is looking at Iowa.”

CORRECTION 2/3/2020, 11:50 am: An earlier version of this story stated referenced a source going to Davenport University in Cedar Rapids to canvas for Bernie Sanders. This was a misprint, as the source traveled to Davenport and Cedar Rapids, never stopping at a university.