OPINION: Reporters did wrong by Kobe and Gianna Bryant 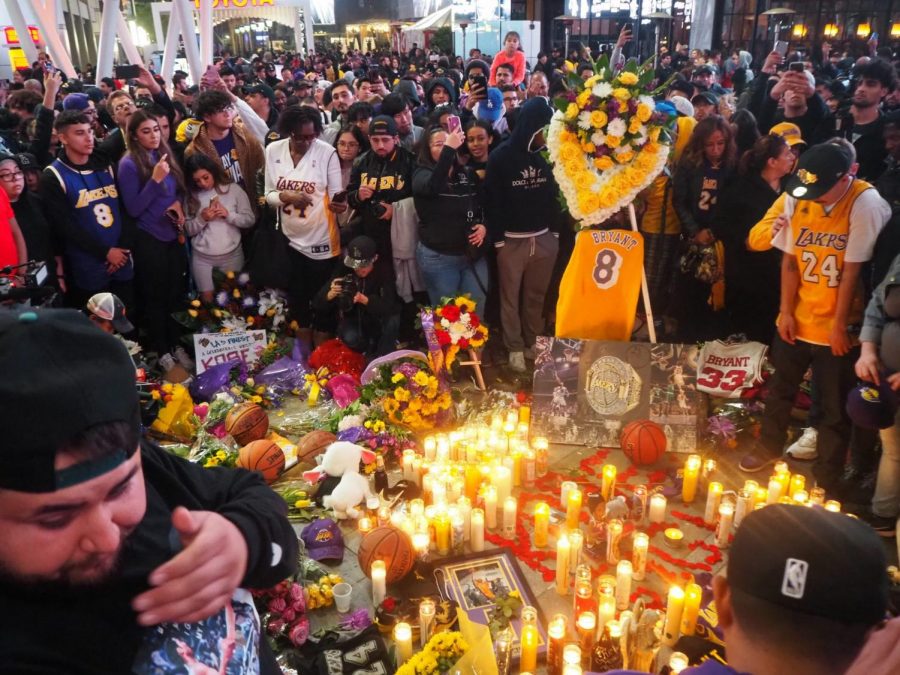 Fans mourn Kobe Bryant outside of the Staples Center on January 26, 2020.

Just like Michael Jackson’s death hit most of us all so profoundly in 2009, the death of NBA star Kobe Bryant last Sunday will go down in history as one of those “Where were you?” days.

Last Sunday afternoon, when the world was stricken with the news that Kobe Bryant died in a helicopter crash earlier that day, no one will forget where and when they heard it from.

When we hear about such stunning and grieving news in today’s time, we often search and refresh our timelines on Twitter, and turn on the TV to hear the most accurate and timely report on the matter.

An event as tragic as Kobe’s death shows how top-flight and fast social media sites are, as well as news broadcasters’ work to announce breaking news and provide coverage that is faster and more accurate than others. There’s an old saying, a golden rule in journalism: It’s better to be right than to be first.

Although it is important to cover breaking news, there are ethics behind it – ethics to which are believed to be abandoned last Sunday. Besides respecting the lives of the lost and the lives of those grieving, many news outlets decided to rush the story behind Kobe’s death. Behind the motivations on being the first to break the news, many outlets abandoned the importance of being the most accurate and respectful source to break news.

“Well any sort of sudden tragic death of an international icon like Kobe Bryant is going to generate enormous amounts of coverage. I think most of it was very balanced and fair but there were obviously some mistakes made,” he said. “You know, that’s the risk of trying to be first, you don’t have your facts in a row.”

Since the announcement of Bryant’s death, there has been recent backlash on the tabloid news service, TMZ. Although the news service claims that their tip on Bryant’s death came from a law enforcement source, Los Angeles County Sheriff’s Department called out the show for being the first to report the death, especially before Vanessa Bryant, Kobe’s wife, could be informed on the matter.

After TMZ posted the breaking news on Twitter before it made headway to other news organizations, an influx of worriers and followers tweeted at Vanessa Bryant asking if the news was true. It is horrific to imagine being asked by a bunch of twitter users, if it is true that your husband is actually dead, before you heard the news yourself.

Although TMZ was the first to break the news of Kobe Bryant’s death, the news service has received an influx of backlash, scrutiny and scolding from the LAPD, for simply reporting the news disrespectfully to the families of those who lost loved ones. In the rules of journalism it is important to break news and to tell it correctly, but there is also an importance of ethics behind doing so.

“I think so many media platforms reported it falsely because in a time where the story is so massive and developing so quickly, everybody wants to be the first ones to share the information with the world,” he said. “This turns into a sort of desperation on the media’s part. I think there needs to be a level of ethics from media outlets like TMZ when covering extremely sensitive stories like the death of Kobe.”

The death of 41-year-old Kobe Bryant and his 13-year-old daughter as well as seven others in the helicopter whose lives were lost was a story told incorrectly and rapidly spread before it was proved correct.

TMZ was not the only news service that circulated the breaking news in an unethical way last Sunday. In a haste to report the news first, many media outlets raced to report it, whether it was correct or not. Many followed the reports of other news stations, adding onto the false reports and confusion for those grieving.

Before it was confirmed that it was Kobe Bryant, his 13-year old daughter Gianna and seven others in the helicopter, WPLG news, an affiliate to ABC news, tweeted that Bryant’s four daughters were reportedly amongst those who were killed in the crash. Although the tweet was soon deleted, it didn’t take long for others news sites to circulate that information, although it was not proven true beforehand.

When the whole world is watching, journalists must try their best to get all of the stories and facts correct. People are constantly refreshing their feeds and turning on the news, often whatever is told is digested, readers and listeners will remember always remember the mistakes and false reports made on that day.

“It casts the whole industry in a bad light when you screw up a big case like that,” Lawler added.

The news of Bryant’s death was so tragic and captivating by all, that it was almost what every newspaper, broadcast network and sports event began its lede with during that day and the days following behind it.

Although there were a series of false reports and new outlets flooring it to get out the news first, there were also many sentimental and commemorating reports as well.

The Los Angeles Times dedicated the majority of its front page to Bryant, many NBA games that day halted their first 24 seconds of the game in memory of Bryant, as well as hundreds of celebrities shared and tweeted photos, stories, and texts for him, his family, and the others in the accident.

There were many malpractices in the journalistic world last Sunday, but the world came together to gather its resources, to honor and pay tribute to those who lost their lives and loved ones in that horrific accident everyone will remember.