COLUMN: Winning games will keep fans coming back to Wintrust, not concessions or parking 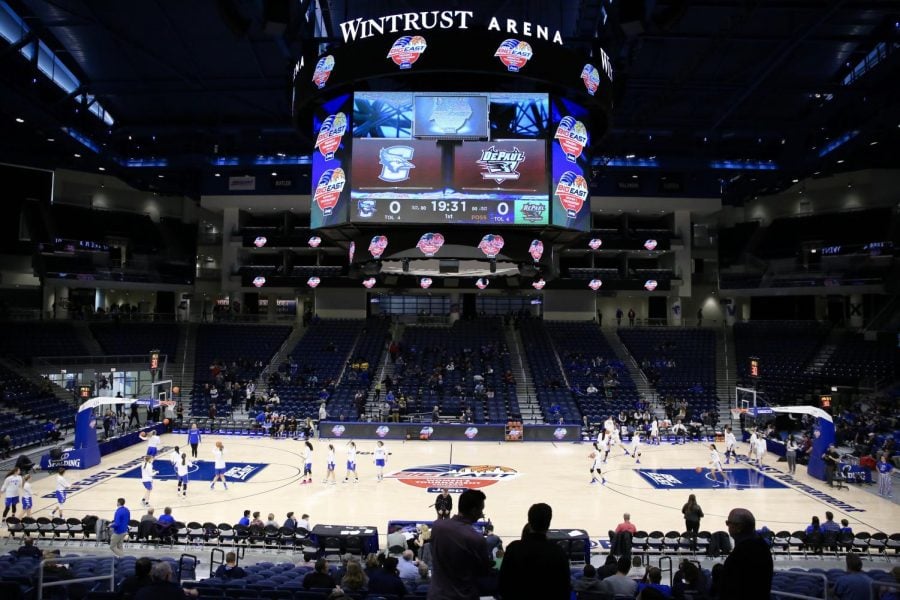 DePaul and Creighton players warm up with just under 20 minutes until gametime Monday night at Wintrust Arena. The Blue Demons won the game 80-69. Alexa Sandler | The DePaulia

When Providence came to Chicago on Jan. 4 to face DePaul at Wintrust Arena, the Friars’ head coach Ed Cooley had sparkling things to say about the newly-opened stadium during his press conference. Cooley expressed his admiration for Wintrust after his team won 66-65, speaking on the aesthetics and the crowd noise that Wintrust generates when DePaul went on a run in the second half.

“This is honestly one of the hardest times we played here, with that crowd like that,” Cooley said after the game. “That place was rocking and rolling, and [Devin Gage] made a three and then I think [Charlie] Moore made a three, and I was like ‘Oh geez, man stop the bleeding a little bit.’

“This is a beautiful arena, I love this building. I think this is one of the best buildings we play in, and I’m so fortunate that it is in the Big East.”

The reported attendance, which is how many tickets were printed, sold and distributed, for the game against Providence was 4,945. But the real attendance — which is how many people showed up to the stadium and had their ticket scanned — was only at 3,101, according to documents obtained by The DePaulia via the Freedom of Information Act. That’s 2,000 seats shy of half-capacity.

Now, imagine if Wintrust was just 50 percent full for the Providence game and that same energy from the crowd was even more daunting for the opposing team. That’s the type of potential Wintrust has because of the arena’s closeness to the court and the noise it can produce when the team is playing well.

But all of that depends on the team performing well on a consistent basis, and not teasing its supporters with a good game one day and then a disappointing game the next day — which is what the Blue Demons have done in the Big East this season.

The noticeable difference this season, however, is the energy in the building when DePaul was playing well in their first 13 games. The Blue Demons raced out to a 12-1 record before the start of Big East play, with multiple home games coming down to the wire. But the support from the fans helped get DePaul across the finish line in all of those wins; against Texas Tech, with only 3,883 people attending the game, the noise that erupted from the crowd when DePaul went on a run in the fourth quarter and overtime was deafening.

A couple of weeks later against Northwestern, DePaul trailed 70-64 with five minutes to play and behind over 4,400 people, the Blue Demons closed the game on a 19-8 run to win 83-78.

Even in those games where there were fewer than 5,000 people at the game, the arena was pumping with energy when DePaul was going on runs late in the second half to pull out close wins. While the increase in attendance can be attributed to the team’s improved start earlier in the season, DePaul athletic director Jean Lenti Ponsetto believes the improvement in attendance is linked to better parking and concessions.

“I don’t want and I probably shouldn’t leave out the fact that we have worked out a lot of logistics issues that were kind of deterrents for fans,” Lenti Ponsetto said. “And actually just being much more communicative about where the bathrooms are a little thing like that. When you look at all the research that’s done, all the marketing research done, you know, parking and concessions are two main drivers and why fans will return.”

While that might be the case and those things may have improved this season, the No. 1 reason why fans come back to watch a team play is how well they are playing. Unless someone is a diehard supporter of a team or possesses season tickets, the likelihood is that they won’t show up on a consistent basis if the team is playing poorly — which is exactly how the Blue Demons have played at home in the Big East this season.

The simple truth is: People show up when there is good basketball to be watch. And that hasn’t been reliably available for Blue Demon fans.

Besides their one home conference win in 2020 against No. 5 Butler, that produced a real attendance of 6,932, DePaul has been lackluster in their five home games — going 1-4 and losing by a combined 37 points. And even in the Butler game, which was the second-highest reported attendance in Wintrust history, a lot of the sections were filled up with Bulldog fans.

Even though Lenti Ponsetto seems to downplay the importance of winning in terms of attendance numbers, the facts point to fans caring about wins more than parking and concessions.

“And, you know, I think most people want to automatically think that it’s all about whether or not your team wins,” Lenti Ponsetto said. “It’s not necessarily that to be the case, because there are a lot of programs throughout the country where teams don’t win all the time. But it’s a great experience for their fans. And then people who have affinity for the programs come back and support the program.”

There’s a reason that attendance for Chicago Bulls games this season have considerably dipped, and it’s not because of parking or concessions suddenly getting worse. The Bulls were always near the top in attendance, even when they were losing, but this season fans have started to voice their displeasure with an underwhelming team by simply not showing up. In a game against the Toronto Raptors on Dec. 9, the reported attendance was 14,775 — the lowest mark for the United Center since 2004.

The same rationale can be applied to DePaul and their declining fanbase over the years – the team simply started to lose year in, year out. Now, with the team’s hot start in November by going 8-0, more people attended games in December as a result — but that is not enough to make that support stick in the long run.

In order for the Blue Demons to see a packed stadium every season, it’s going to start by proving to Chicago they can win on a consistent basis, something DePaul is struggling to do in the Big East once again with their 1-8 start, and it’s not just about their “improved” parking and concessions.