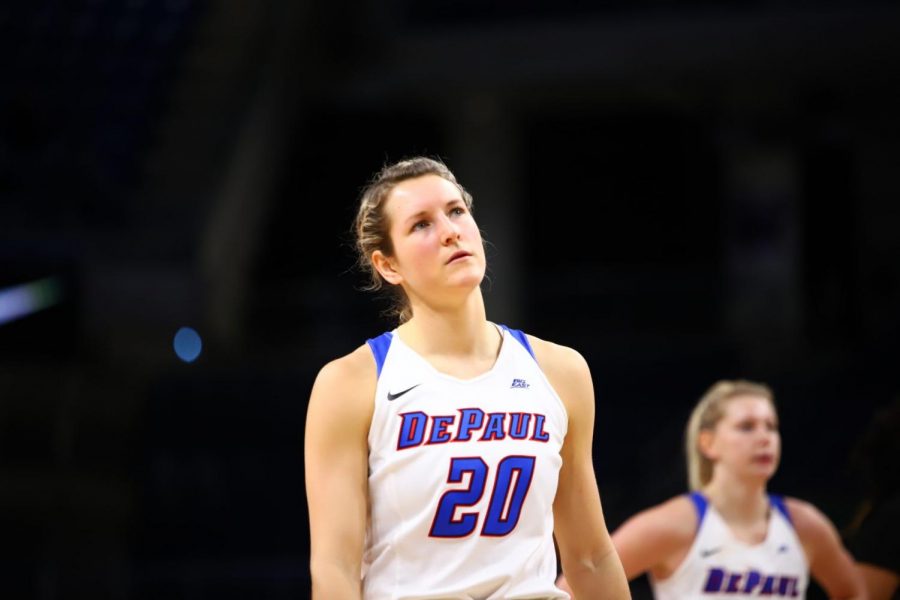 Senior guard Kelly Campbell looks on as DePaul took on Providence on Sunday at Wintrust Arena.

While sitting unmatched on top of the Big East standings, the 20-3 (10-1) DePaul women’s basketball team has now found back-to-back representation in the Player of the Week award for the conference with senior guard Kelly Campbell winning this weeks award after Lexi Held took home the prize last week.

Campbell has been the conductor of the second-best offense in NCAA women’s basketball this year, leading the team in rebounds (8.1) and assists (5.8) per game. Honoring her skill as an all-around point guard, Campbell notched her second career triple-double in a win over Providence on Sunday where she had 12 points, 11 rebounds and 13 assists in the 93-71 victory.

Her first triple-double came on Dec. 28, 2017, in her sophomore year where she posted 12 points, 11 rebounds and 11 assists against Seton Hall. Campbell is the second player in DePaul history to record two triple-doubles after Jessica January did it twice earlier this decade.

Over the past week, Campbell led the Big East in rebounds (12), assists (8) and assist to turnover ratio (+8). The Blue Demons dropped their first Big East game of the year on Friday, Jan. 31 in a 63-61 loss to visiting Creighton before the 22 point win against Providence two days later.

13 assists against Providence marked the highest assist total in a game for any player in the Big East conference this season. In the game, Campbell also forced four steals and threw six of her assists in the third quarter. The fourth quarter saw her knock down a 3-pointer in the opening minutes to supply to the big run DePaul needed to shut the door on the game.

This was Campbell’s first Big East accolade of the season and DePaul’s second Big East player of the Week award.

Villanova’s Maddy Siegrist was selected as Big East Freshman of the Week, a staple for the forward who has now won the award nine times this season.

The Blue Demons will take on St. John’s on the road on Friday at 6 p.m. before heading to South Orange, New Jersey on Sunday at noon. Today’s latest AP top 25 saw Campbell’s Blue Demons sit at no. 14 in the overall standings.