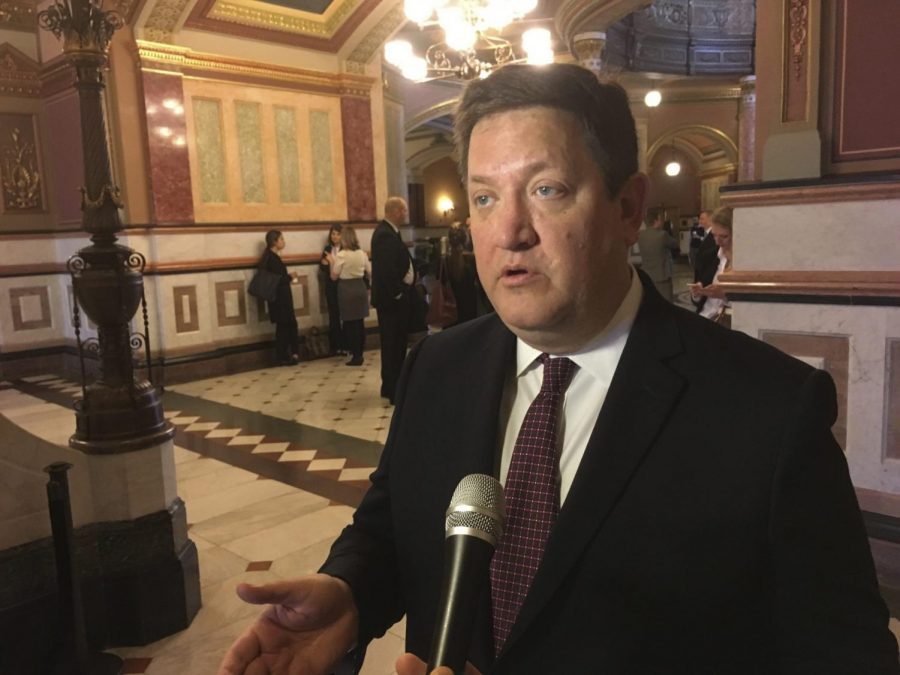 SPRINGFIELD, Ill. (AP) — Red-light enforcement cameras, at the center of an ex-state senator’s guilty plea last week on federal bribery charges, would be banned in some suburban Chicago communities under legislation a House committee approved Wednesday.

Rep. David McSweeney’s plan is identical to one that died in the Senate four years ago. Court papers indicate that then-Sen. Martin Sandoval began taking bribes that year to be a legislative “protector” for a red-light vendor supplying the technology to cities throughout the Chicago area.

Sandoval, a Chicago Democrat who was chairman of the Senate Transportation Committee, pleaded guilty in U.S. District Court in Chicago to accepting about $250,000 in bribes in part from a camera vendor and for filing a false tax return. He could face about 12 years in prison but is cooperating with federal officials in an ongoing investigation.

“These cameras are nothing more than a get-rich scheme for the companies that install the cameras and the politicians who profit from protecting the companies behind this scam,” said McSweeney, a Barrington Hills Republican.

McSweeney’s legislation would ban red-light cameras, which photograph alleged traffic violations, replacing police patrols at high-volume or dangerous intersections, from smaller cities without home-rule powers. It would affect about 15 municipalities out of more than four dozen that employ the technology. McSweeney acknowledged the ban in non-home-rule cities is a small step. Home-rule communities have broad powers to operate without legislative oversight.

The Transportation, Vehicles and Safety Committee voted unanimously to send it to the House floor for action.

Al Ronan, a lobbyist for Lombard-based red-light vendor Red Speed who also represents several suburban governments, said that the program’s main thrust is public safety. To the extent municipalities generate revenue, Ronan said, it’s “by using technology to free up police officers who would otherwise have to sit at corners and wait for someone to break the law.”

A portion of the bribes paid to Sandoval came from a red-light vendor prosecutors refer to only as “Company A.” But during his plea hearing, Sandoval slipped and identified it as SafeSpeed, based on Chicago. The company issued a statement last week saying that individuals apparently committed crimes “without SafeSpeed’s knowledge and in violation not only of the law but of SafeSpeed’s culture.”

Both Ronan and SafeSpeed spokesman Dennis Culloton said McSweeney’s legislation is not the way to respond to criminal activity.

The program has “been proven to save lives and increase public safety,” said Culloton, adding that SafeSpeed would support legislation “that would reform the industry and ensure the highest levels of ethics by officials and businesses.”

McSweeney’s earlier legislation won House approval 79-26 in April 2015. It went to the Senate where, during the next 13 months, it was shunted from committee to subcommittee, landing in the Transportation Committee twice. It died with the General Assembly’s adjournment in January 2017.