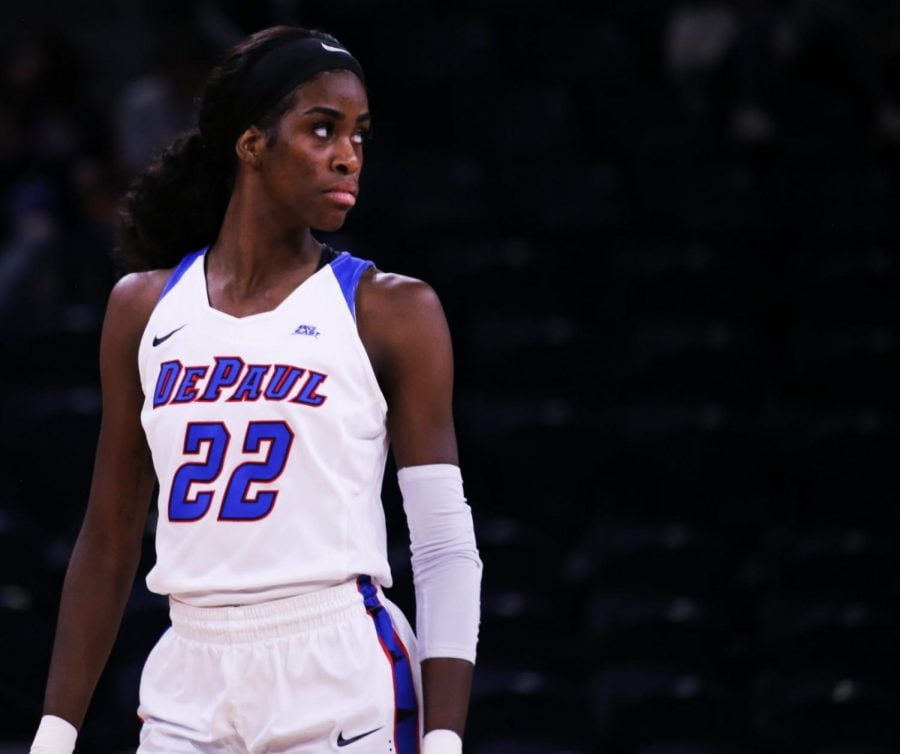 Chante Stonewall looks over her shoulder during a game against Creighton on Jan. 31. Stonewall scored 24 of her career-high 29 points in the first half against Seton Hall.

The No. 14 ranked DePaul women’s basketball team is in the midst of the toughest stretch of their Big East schedule with four of their last six games on the road. After Friday’s triumph over St. John’s, the Blue Demons turned to South Orange, New Jersey to take on Seton Hall. The Blue Demons embraced the fast pace from the Pirates, with Chante Stonewall scoring 24 of her career-high 29 points in the first half en route to an 86-76 win.

Both teams looked to create a disruptive pace, averaging three shots per minute to start the game. DePaul got a late advantage and forced a scoreless stretch from the Pirates to go up 27-21. Stonewall had 13 points to lead all scorers.

In the second quarter, Stonewall got to work early hitting a turnaround jumper and then finding Deja Church for a three to take a quick nine-point lead. Mya Jackson and Lauren Park-Lane of Seton Hall cut the game to 32-28 two minutes later after two forced turnovers that led to layups.

Jackson scored the first five points of the second half to force DePaul head coach Doug Bruno to call a timeout up 50-45. Desiree Elmore cut the game to just 54-53 with five minutes remaining in the third quarter.

From there, Seton Hall and DePaul would swap the lead as Campbell scored her first seven points to help keep DePaul up 61-59 with 3:01 left in the quarter. Samuels and Elmore combined for 28 for Seton Hall in the first three quarters.

Deja Church and Dee Bekelja would hit back-to-back 3-pointers to extend the DePaul lead to 78-71 with 4:29 left in the fourth quarter. Stonewall would eclipse her career-high with a turnaround jumper that put her at 29 points while giving DePaul a six-point cushion.

The Blue Demons would control an 82-76 lead with under a minute left. Morris grabbed a rebound that put Seton Hall in a fouling situation. Kelly Campbell knocked down four free throws that sealed the game. DePaul came out with an 86-76 win.