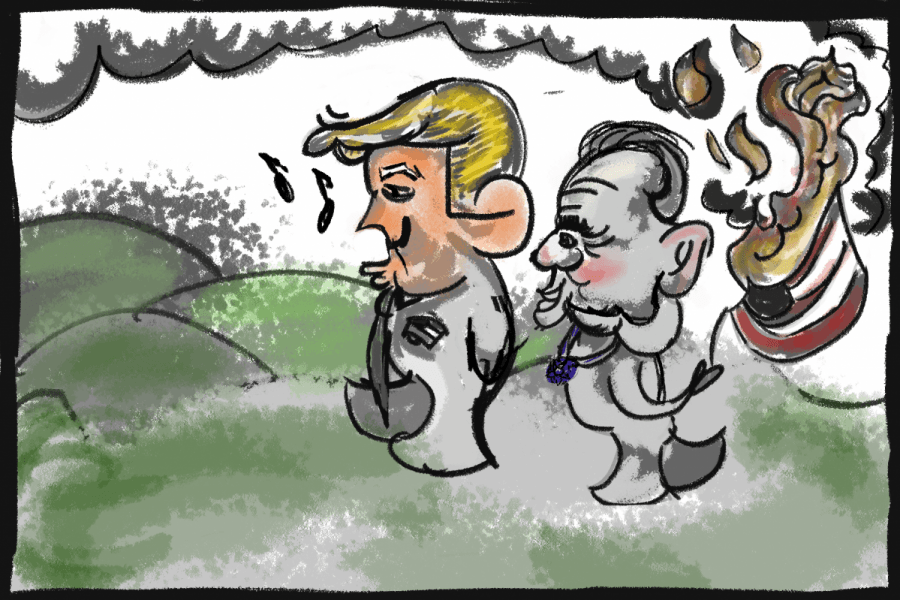 To be perfectly honest, I’ve become somewhat jaded about President Trump. I just can’t seem to access the outrage.

I’ve never been much of an activist for any issue or political persuasion, but it’s not like I’m apathetic about American politics. In fact, I’m one of those rare people who can sit in front of CSPAN for hours without falling asleep. Parliamentary procedure can be delightfully Shakespearean, if you ask me.

But when Donald Trump presented conservative radio icon Rush Limbaugh with the Presidential Medal of Freedom at his State of the Union address this week, I couldn’t hold it in.

For me, Trump has always produced more curiosity than anger. His rhetoric and behavior are quite objectionable — that’s hard to ignore. But before I can get all riled up about some outlandish proposal or bigoted remark, I find myself distracted by the way he talks. His fifth-grade diction never fails to stun me, and I often chuckle at his New York City bravado, which I would admire anywhere outside the Oval Office. Now, three years later, I still can’t wrap my head around how we elected the kid in class who raises his hand just so everyone can hear him fart.

Before this dumbfounding celebration of indecency this week, Trump has only done two other things that really spiked my heart rate. Everything else was so predictably deranged I just rolled my eyes.

As you read this on a news website, the first may be obvious: a consistent, full-throttle assault on American journalists. The first amendment comes first for a reason and Trump doesn’t seem to care. While I actually do agree that the American media establishment has lost its way at times, Trump’s critique is a dangerous fabrication of reality.

The second, as I discussed in a column last spring, was when Trump presented Tiger Woods with the Presidential Medal of Freedom after his awe-inspiring victory at the 2019 Masters Tournament. Woods is my favorite athlete of all time, but I couldn’t help but feel like that moment was being mocked. It was clear that Woods had received this award because he and Trump, an avid golfer in his own right, are friends.

And, of course, because Woods is a “winner.”

This week, the president balled my two greatest Trumpian pet peeves into one, and honored Rush Limbaugh, perhaps the most divisive and destructive figure in modern American political discourse.

This moment shouldn’t be trivialized.

“[The Medal of Freedom] really says a lot about what each president values,” said associate professor of political science at DePaul Ben Epstein. “It’s a way for them to suggest what or who is important and who should be recognized and why people should be recognized. It’s a way to leave a legacy in terms of, not only in who they select, but what type of person and what type of values the president emphasizes when they are in office.”

As Trump dished out most of his Medals of Freedom to former athletes — many of them vocal conservatives like Roger Staubach — it never felt particularly consequential. Annoying, sure, but the medal doesn’t give you any real power or influence. With Limbaugh, however, this value statement is actually meaningful.

Limbaugh is a legend of AM radio, and his show quickly became the biggest AM radio show in the country. In many ways Limbaugh laid the foundation for a Trump presidency by professing on his show a far-right ideology that now lives at the heart of the Republican party. If you go back and listen to Trump’s stump speeches from the 2016 campaign, it sounds like an album of Limbaugh’s greatest hits.

Limbaugh cultivated and united the base that Republican leaders now flock to represent; he poured the cement that cast the deplorables’ vote in stone.

I must admit, that I’ve always been something of an ironic Rush Limbaugh fan. It’s a lot like the mid-2000s Comedy Central hit “The Colbert Report,” minus the (intentional) satire. And in the same way that SNL writers bow at the altar of Sarah Palin, Limbaugh makes his money on the likes of Bernie Sanders and Alexandria Ocasio-Cortez by whipping his listeners into a frenzy about the creeping threat of socialism. When Obama was in office, it was the creeping threat of Islam and “black culture.”

The timing of this announcement does come from a place of decency. As Trump noted in his announcement, Limbaugh was recently diagnosed with advanced lung cancer. Anybody with a heart, including Limbaugh critics like myself, should wish him a full recovery. I wouldn’t wish a battle with late stage cancer on anyone. But we can’t let that be the basis for earning the nation’s highest civilian honor.

Limbaugh is not a journalist, he is not an academic, and he is not, by all indications, interested in saying anything true. Limbaugh was a genius when it came to cultivating loyalty, forcing fans to drink poison as fast as he could make it. His contribution to American civic life is akin to the addition of carbon to the ozone layer.

On the surface, this is just another example of Trump rewarding loyalty over reason. But what (not necessarily who) he honored this past Tuesday should be viewed as one of the most meaningful statements this president has made yet. With this medal, Trump established divisiveness, bigotry and contempt for truth and reason as an All-American value.