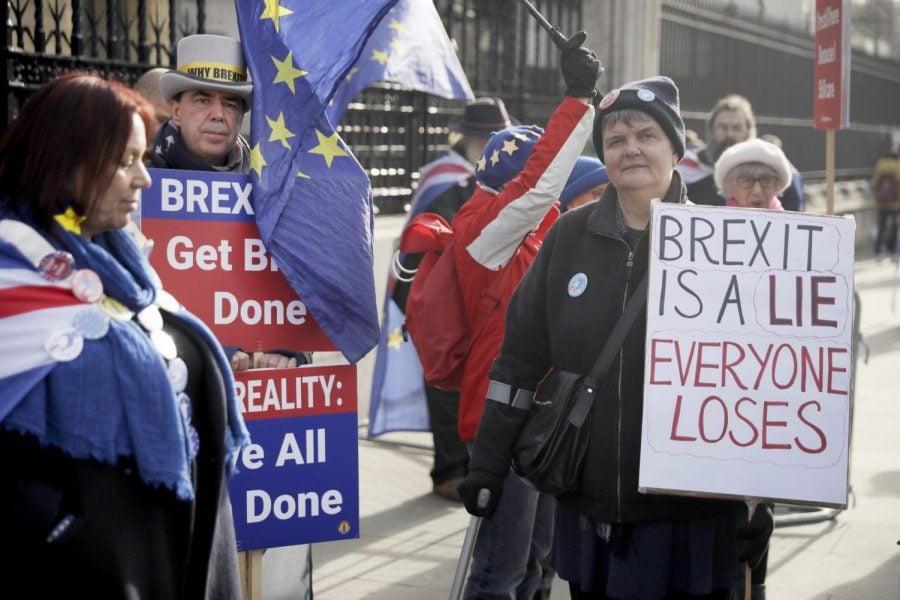 Anti-Brexit sentiments became more apparent than ever as Jan 31. marked the United Kingdom officially leaving the European Union – after nearly three and a half years of stalled negotiations following the controversial vote.

Even though Brexit Day was ceremoniously hailed as the nation’s exit, Britain is technically in an interim phase until Dec. 31, 2020.

“The U.K. is currently in a ‘transitional period’ through the end of this year in which the previous rules from its membership apply while it negotiates a permanent agreement with the EU,” Tillman said. “So we simply don’t know what that final agreement will look like, and thus it is still difficult to say what Brexit will ultimately mean for Britain and its citizens.

Among issues slowing negotiations, one of the most pressing was the border between Northern Ireland and Ireland.

“It was very hard for all the relevant groups to agree on what should happen on that border, which has its own difficult story and history over the past 100 years. That issue slowed the whole process down,” McCain said.

“Britain will be the first member of the EU to ever leave since the establishment,” Wellman said. “And so in many respects, this pioneers, this blazes a trail that nobody’s ever gone down before.”

Though not all of the specific consequences are clear, some immediate changes will occur. U.K. representatives, like Nigel Farage – who has come under fire for his latest speech – will lose their seats in the European Parliament. Participation in EU meetings will cease and special invitations need to be granted to attend summits.

Despite the changes, some things will remain the same during the transitional period, including travel between the U.K. and nations in the EU and European Health Insurance Cards will still be valid for British citizens.

Tillman said the nation will have to negotiate its own trade treaties with individual countries.

“The assumption is that Boris Johnson’s government will pursue strategies oriented around low taxes and regulations designed to enhance international competitiveness,” Tillman said. “However, his victory in the December 2019 election relied on support from many traditional manufacturing areas in northern England, so it’s unclear if voters in those areas would favor such policies.”

“Generationally, older voters were more in favor of leaving the EU while younger voters favored remaining,” Tillman said. “Residents of big cities like London and Manchester favored remaining in the EU while those in smaller cities and rural areas were more in favor of leaving. And the majority of voters in Scotland and Northern Ireland voted to remain.”

Despite the uncertainty that persists, Wellman said the move may prove beneficial for nations remaining in the European Union.

“Perhaps this is an opportunity for the EU to look at what do European nations have in common beyond a common currency?” Wellman said. “And what do people have in common that they can work together on? Like, for example, they have a common environmental reality and looking at climate change and how they can work together. But the U.K. benefited immensely from its membership in the EU and I think they’re going to pay a not insignificant price for leaving.”