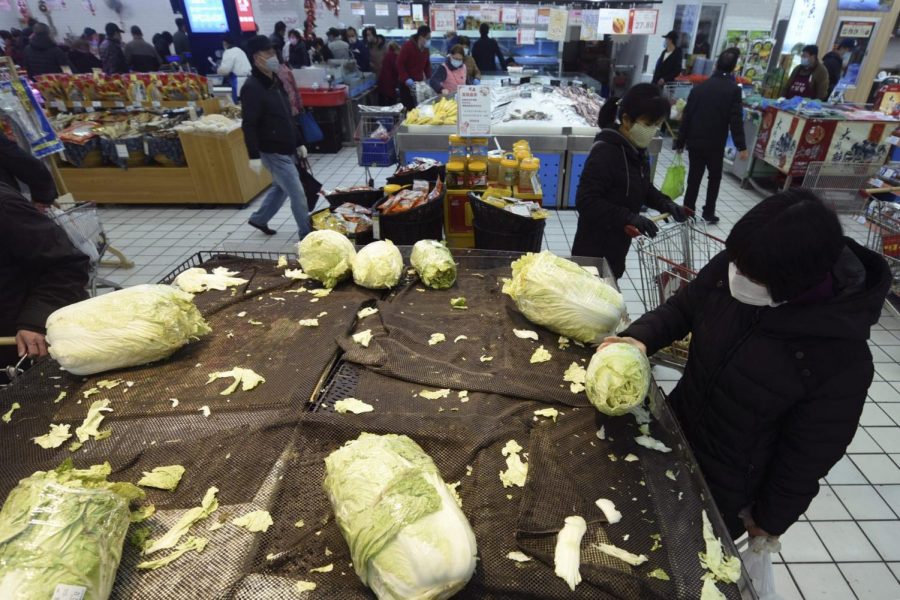 A woman, right, wears a face mask selects cabbage at a supermarket in Hangzhou in east China's Zhejiang province, Saturday, Feb. 8, 2020. China's communist leaders are striving to keep food flowing to crowded cities despite anti-disease controls, to quell fears of possible shortages and stave off price spikes from panic buying after most access to Wuhan was cut off Jan. 23. Food stocks in supermarkets ran low shortly after Beijing imposed travel curbs and extended the Lunar New Year holiday to keep factories, offices and other businesses closed and the public at home, attempting to prevent the virus from spreading.

BEIJING (AP) — The manager of the Wushang Mart in Wuhan, the locked-down city at the heart of China’s virus outbreak, says its shelves are loaded with 50% more vegetables and other food than usual to reassure jittery customers.

Communist leaders are trying to keep food flowing to crowded Chinese cities despite anti-disease controls and to quell fears of possible shortages and price spikes following panic buying after most access to Wuhan was cut off Jan. 23.

Employees at the Wushang Mart wear masks and protective suits. Customers wash their hands with disinfectant and are checked for the virus’s telltake fever, said the manager, who would give only her surname, Lu.

“It is normal for people to worry about supply, but we explain there will be enough,” Lu said by phone.

Food stocks in supermarkets ran low shortly after Beijing imposed travel curbs and extended the Lunar New Year holiday to keep factories, offices and other businesses closed and the public at home in an attempt to prevent the virus from spreading.

That also kept trucks off the road, disrupting supplies of food to markets, feed to farmers and poultry to slaughterhouses. As the shutdown of Wuhan expanded to cover cities with a total of 60 million people, villagers set up their own roadblocks to keep outsiders and possible infection away.

“These problems are being coordinated and resolved,” Lian Weiliang, deputy chairman of the National Development and Reform Commission, said at a Feb. 3 news conference in Beijing.

To reassure the public, state media are filled with photos of boxes stuffed with eggplants, cauliflower and other vegetables being loaded onto trucks for delivery to markets.

Party leaders in Shenzhen, a city of 15 million people adjacent to Hong Kong that is a center for finance and technology, sent officials to rural Yunnan province in the southwest to make sure vegetable shipments resumed quickly after the holiday, the Shenzhen News Net reported.

China already was struggling with surging food prices due to an outbreak of African swine fever that began in 2018. Millions of pigs died or were destroyed, disrupting supplies of pork, the country’s staple meat.

The price of pork doubled in December from a year earlier, pushing up overall food costs by double digits. The government has released pork from stockpiles but industry analysts say prices and the size of Chinese pig herds are unlikely to return to normal until at least next year.

In quarantined areas, trucks with government permits are allowed through roadblocks every day to bring in food. Soldiers from the ruling party’s military wing, the People’s Liberation Army, have taken over delivery of medical supplies.

Some trucking companies are shorthanded because drivers who returned to their hometowns for Lunar New Year are stranded there by the suspension of bus and train links in some areas.

“We have eight trucks and three of them are operating now,” said an employee of a vegetable delivery company in the eastern city of Nanjing. She would give only her surname, Yao.

The Wushang Mart cut its daily opening hours from 13 to seven and put the whole staff to work in one shift, said Lu, the manager. That includes unloading 1,000-kilogram (2,000-pound) truckloads of green beans, spinach, potatoes and other vegetables.

Even getting out to shop is a challenge in some cities that are under almost total quarantine.

Only one member of each household is allowed out each day to shop for food in Hangzhou, an industrial metropolis of 10 million people southwest of Shanghai, and in Huanggang, a city of 1 million near Wuhan.

Millions of households are relying instead on online grocery shopping, already a booming Chinese consumer trend.

JD.com, the country’s biggest online direct retailer, said its sales of fresh food in Wuhan were up 280% from a year ago in the week ending Feb. 2. Nationwide, it says sales of beef, pork and eggs were up 400%. The company said it sold 1.8 million bottles of disinfectant.

In Nanjing, an outlet of the Huarun supermarket chain is stocking more than usual “to make sure people have enough to eat,” said an employee who answered the phone there. He refused to give his name.

“There were some people who tried to buy a lot, but they no longer do it after seeing the abundant supply,” said the employee.