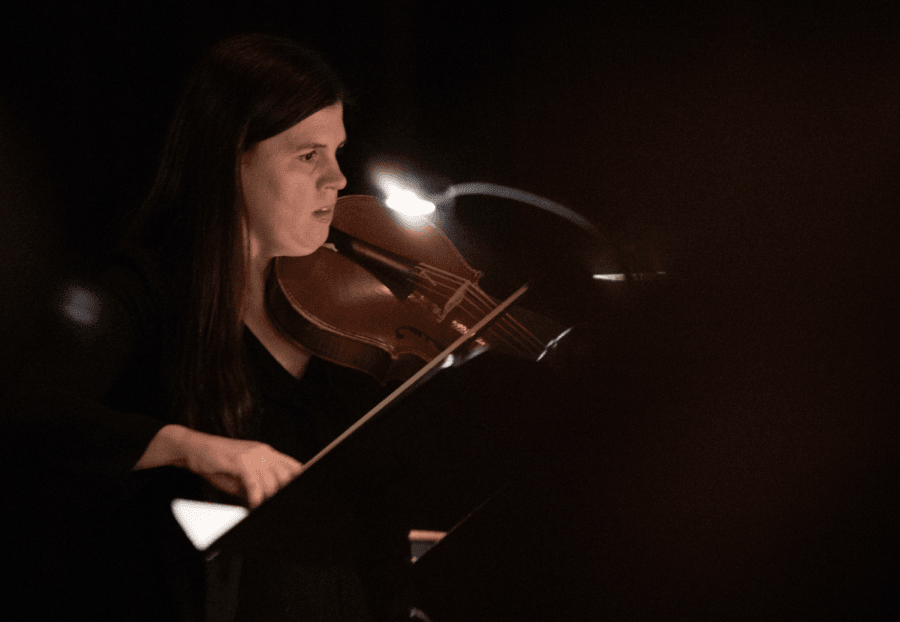 Brandi Berry Benson, a violin professor at DePaul, playing music inpsired by Isabelle d’Este. In this image, she is playing viola at The Newberry Consort.

In the fourth grade, after a next-door neighbor showed Brandi Berry Benson the violin, she realized her natural musical abilities. Since then, Benson’s passion for classical music has shaped her life.

Growing up in Texas, Benson was not surrounded by musical parents. Her grandmother on her mom’s side was the one with a niche for older styles of music. Benson said in the living room of her grandmother’s house, there was a Hammond Organ and an accordion.

“It was my grandmother that noticed that I was musical and was the one that really encouraged my parents to get me music lessons and an instrument and I actually started on piano first,” Benson said.

After learning piano, her passion further developed and eventually led her to the violin. The summer before her fifth grade year, she was in an enrichment program and that is when the violin became her instrument of choice. Her piano skills faded as her violin skills skyrocketed.

“If it has strings and it can sit on your shoulder, then I can play it, in some level of competency,” Benson said humorously.

Benson got her bachelor’s degree at the University of North Texas in 2004, where she was mostly playing bluegrass and folk music, which she grew up listening to. In 2008, she received her master’s degree in Baroque violin performance from Indiana University. Since then, she has been teaching Baroque violin at DePaul University.

“My first love and always will be, is performing – that’s my greatest passion,” Benson said. “And my teaching is kind of coming out of inspiration of that. So, a lot of what I’m teaching is, of course, like, everything I research.”

Benson teaches classical, romantic and folk music and she thinks there is something about the Renaissance and Baroque periods that really resonate with her.

In 2004, Benson met one of her mentors that have hugely impacted her life. David Douglass, who she first met during college, has helped shape the style of music that she plays and it has also impacted her teaching style. Benson learned a lot through him and watching him perform.

“I have mentored a lot of students over my career and Brandi is one of the handful, the few that have came out with just such an amazing innate ability,” said David Douglass, the co-artistic director of the Newberry Consort. “Her artistic sensibilities and her physical techniques. The combination of all of those things just really made her a superior early music musician so I didn’t hesitate to involve her in professional things that I was doing.”

Determination and passion radiate off of Benson. She is just as soothing and enchanting as the music she plays. She brings angelic energy in her performances.

“She’s very easy to work with, very nice person,” Douglass said. “I made a commitment to myself on my 40th birthday that I would no longer work with jerks and so, Brandi fits right into that. She’s great.”

Benson has been performing with the Newberry Consort since 2009 and has performed with others such as the Kings Noyse, Ars Lyrica Houston, Ensemble Phoenix Munich, as concertmaster of Chicago Arts Orchestra and much more. She is also a 3Arts awardee. On top of that, she has put out two albums.

Recently, she performed with the Newberry Consort, Chicago’s Premier Early Music Ensemble, playing the music of the early renaissance era that involved the Marchesa Isabelle d’Este. She is known as “The First Lady of the Renaissance.” Douglass said that she was a great mover and shaker in the arts. Isabelle d’Este court records, making her the first use of the violin family. She purchased violins to play frottole, a kind of dance song. It was pop music back in that era.

Renaissance and Baroque music hold a special place in Benson’s heart and she enjoys performing that style of music the most. It helped her during a rough time in her life.

“There was one summer that was a sad summer for me, it was the summer I lost my grandmother,” she said.

During that summer she performed with two music groups, one being Kings Noyse when it was still going.

“We played the seven lachrimae [teares] by Doland and that was one of the most memorable performances because at that point when I was so connected to grief and like here are these seven, essentially different kinds of sadness you know. I think that was a really memorable performance for me,” she said. “I think there are just like points I guess where things kind of intersected really brought out things that were happening to me.”

Benson lives in Uptown with her husband. He doesn’t play any instruments but he does have an appreciation for Benson’s incredible talent. Due to her living in Chicago, she is able to be apart of the Bach and Beethoven Experience, also known as BBE. Benson is the artistic director.

The BBE aims to shatter expectations of classical music concerts. They write and compose new music to go along with stories in Chicago. They play music of all kinds – classical, folk, original music, and beyond – and go for an interactive experience. Benson is striving to further the BBE and she says that they perform at places that are more accessible for the public.

One thing they do in particular is Chicago Stories. The BBE reaches out to known Chicagoans and Chicago communities and they create a completely new piece of music to go along with the stories of those they are listening too. They wrote and composed a song based on the Assyrian refugee community in Chicago.

“She’s great, she really gets stuff done,” said Leighann Daihl, the BBE development director. “She is very innovative and trying to think out of the box.”

Benson has plans to continue breaking down barriers in the concert scene and wants to further the love of classical music to new generations of people. With the BBE, she thinks that can make that happen and with teaching students with her passionate techniques.

“I think, you know, anytime that you can take a step back in time and look forward, helps you to appreciate, like what comes next in a way,” she said.