‘To All the Boys: P.S. I Still Love You’ shows importance of love beyond romantic love 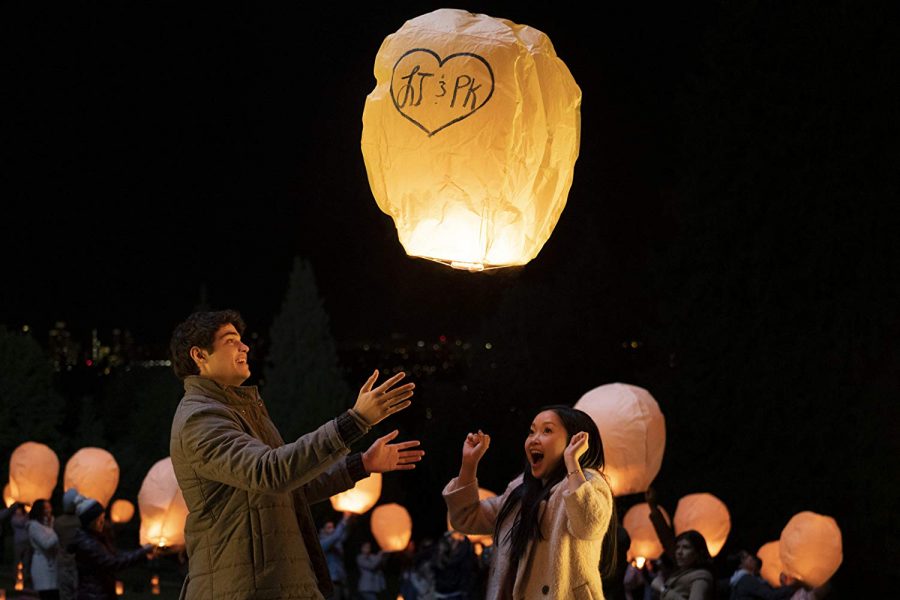 Peter (left) and Lara-Jean (right) on their first official date as an announced couple.

The long-awaited sequel to “To All the Boys I’ve Loved Before,” “To All the Boys: P.S. I Still Love You,” carefully balances relationship, friendship and family love in a way that is so well done, you too will be left smiling and clapping in the theater.

Of course, the adorable couple Lara-Jean (Lana Condor) and Peter (Noah Centineo) melt hearts with their infectious smiles and chemistry, picking up where they left off in the first film. They give you high school love vibes, innocent and new, young and scary.

The film takes you back to that young age of innocence and juvenile romance, but it does it so tastefully that now a locket and homemade card are going back on my wish list. Lara-Jean and Peter have their obvious high school problems: ex’s, and new love interest. Will it make or break the charming, well-suited pair? It became obvious that it would not, but the movie threw in a few twists to keep viewers on their toes.

Lara-Jean says she “doesn’t know how to be a girlfriend,” she is put into a tough situation all because of one last letter that was sent in the first film. While trying to learn the roles of being a girlfriend, here comes John Ambrose (Jordan Fisher), the incredibly cute boy from middle school with a perfect smile. Everyone knows Peter is a looker, but John? Well, let’s just say it’s easy to see Lara-Jean’s confusion.

That confusion takes hold during the entire movie. She begins second-guessing everything that Peter is doing or has done. It makes you cringe at times because it is obvious that just about every person did the exact same thing at that young age of 16. That’s what added to the charm of the film, it was personable in the sense that we’ve all been there. It almost made you want to stop the movie and jump right in to solve it for them.

Luckily, Lara-Jean has Stormy (Holland Taylor) to give her advice on young love. For one, seeing Holland Taylor made the film even better, because who doesn’t love Holland Taylor? Secondly, it’s a young and old friendship dynamic that plays an important role in Lara-Jean’s life.

John makes Lara-Jean smile, laugh and feel beautiful. She can’t help but wonder if the wrong letter got to the wrong guy first. It’s made worse when John begins to play piano in what is absolutely the corniest part of the entire film, but oddly enough my high school ex played piano, so I could see how she was swooning.

While Lara-Jean and Peter are working through the phases of first love, the movie directs you to love in other ways. Lara-Jean’s father, Dr. Covey (John Corbett), has his sights on the beautiful new dog-loving neighbor Trina (Sarayu Rao). His two daughters Lara-Jean and Kitty (Anna Cathcart) try their best to stay out of it, but they both end up meddling. It was refreshing to see a single dad and his daughters be so close. It was also enjoyable seeing a different level of love. Here you are watching young love in high school, but then they add in single adults just trying to do the same thing, find love.

When things start to look good for Dr. Covey, problems arise with Lara and Peter. The sheer fear of getting their hearts broken begins to pull the two apart. Does Peter still love his ex, Gen? Is Lara-Jean too intrigued by John Ambrose to really want to settle for Peter? It makes you smile thinking about how juvenile you were at that age. You feel for them because you start to remember exactly how they are feeling.

The low self-confidence of Lara-Jean paired with Peter’s overconfidence causes them to think they are better apart than together. Oh, the pain of seeing Peter take the locket off of Lara-Jean’s neck. The entire audience was on the edge of their seats waiting patiently for him to kiss her instead. He did not, hearts were broken. Mine included.

You see the stages of heartbreak slowly seep into Lara-Jean’s regular routine and it brings back the memories you experienced, but only this time you can laugh at how silly it all really was. Lara-Jean begins to realize that she may have made a mistake dumping Peter and it was heartwarming seeing her realize that she needs to love herself more in order to love Peter and that’s exactly what she does.

After kissing John, Lara-Jean meets up with her old best friend Gen, also Peter’s ex. When you see that it’s Gen, who Lara texts to talk, you’re left gasping. Gen? Why not Peter? Well, it turns out Lara-Jean needed to make it clear that it was her own issues with Gen that made her upset, not Peter’s.

That was the best moment in the movie, not the cute romantic scenes, the scene of two young girls realizing that they miss each other and a boy wrecked that. Lara’s realization of her own self-worth is sweet to see. She learns that she is good enough, she is pretty enough and it may be a teen drama, but that’s a valuable lesson for anyone of any age.