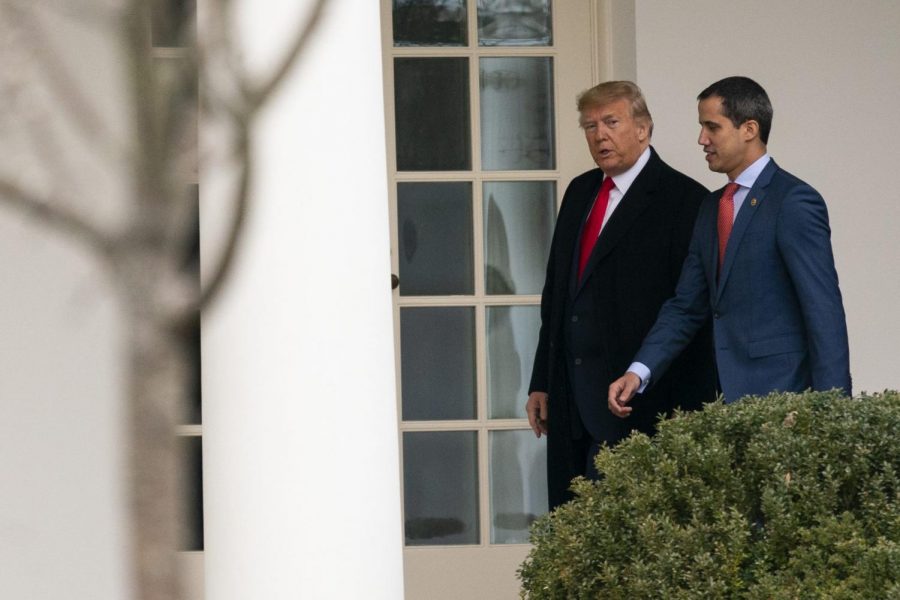 Now, with the support from the U.S., Venezuelans have expressed that Trump’s administration may be a possible ‘lifeline’ and ‘escape’ to the reported crisis that the country is facing.

“Without a doubt, today, any support towards Venezuelan opposition from an international community, that is, to the government of Juan Guaidó, is an important factor in achieving political change in the country,” said Luisela Alvaray, a native from Caracas, Venezuela.

Alvaray, who is currently a Professor of Cinema and Media studies at Depaul, also mentioned that the U.S administration may be doing this out of personal interest.

“Venezuelans are a bit adrift, helpless, because we don’t have a government that welcomes us and protects us,” said Alvaray. “For him it’s an example, as he has said in the past, of the consequences of socialism. It’s a very simplistic vision… it seeks to ignite an unfounded fear since the cold war in everything that relates to leftist ideologies.”

Nonetheless, these so-called ‘selfish political interests’ when helping Venezuela is not surprising, according to Carolina Sternberg, expert in Latin American politics at DePaul.

She says that the U.S is simply doing this out of geopolitical and economic interest considering the past sanctions imposed on Venezuela and the need for control over oil reserves and other production within the South American country — highlighting that Venezuela should find its own way in overcoming the crisis.

“Today the Trump administration is creating a collective punishment strategy in Venezuela with a crippling financial embargo since August 2017 and, since January, a trade embargo,” said Sternberg.

Sternberg mentioned that the trade embargo cut off about 60 percent of the country’s remaining foreign exchange earnings, which are needed to buy medicine, food, medical supplies, and other goods essential to many Venezuelans’ survival.

“Since the 1950s, or even earlier, US interventionism in Latin America has increasingly proven that U.S. economic and military forces continue to cause social unrest, poverty and humanitarian crisis every time they intervene — directly or indirectly — in any Latin American country in the name of democracy in order to save their economic interests,” she said.

But for a Maracaibo native, like Luis Enrique Leal, who currently lives in Portage Park, this intervention is necessary and goes beyond having a ‘political interest.’

“They are people linked and accused of crimes against humanity, corruption, financing of terrorism and drug trafficking….the answer is none other than the immediate departure of all those people from power starting with Nicolas Maduro.” he said.

Leal stated that the only way to overthrow the reported ‘Maduro regime’ is to generate enough internal and external pressure for them to hand over their power and intervene by giving aid to the country’s people.

He also highlighted that only then is this going to, “restore democratic order and safeguard millions of lives in the region.”

“I believe Venezuelans have much to thank President Trump for…” Verde said. “Regardless of whether or not you support him or are against him with respect to his domestic policies in the U.S.”

Despite what some call a ‘self-interested’ Trump administration, some Venezuelans say the U.S.’s strong stance against the Maduro regime is essential to moving Venezuela out from under authoritarian rule.

“The support of a country like the United States has fundamental weight,” Alvaray said.  “But the world is not black and white… so Trump is not a better politician just because of the support he’s providing for Venezuela. Let’s remember that the support is from the government, not just the president of the United States.”