OPINION: You win some, you lose some 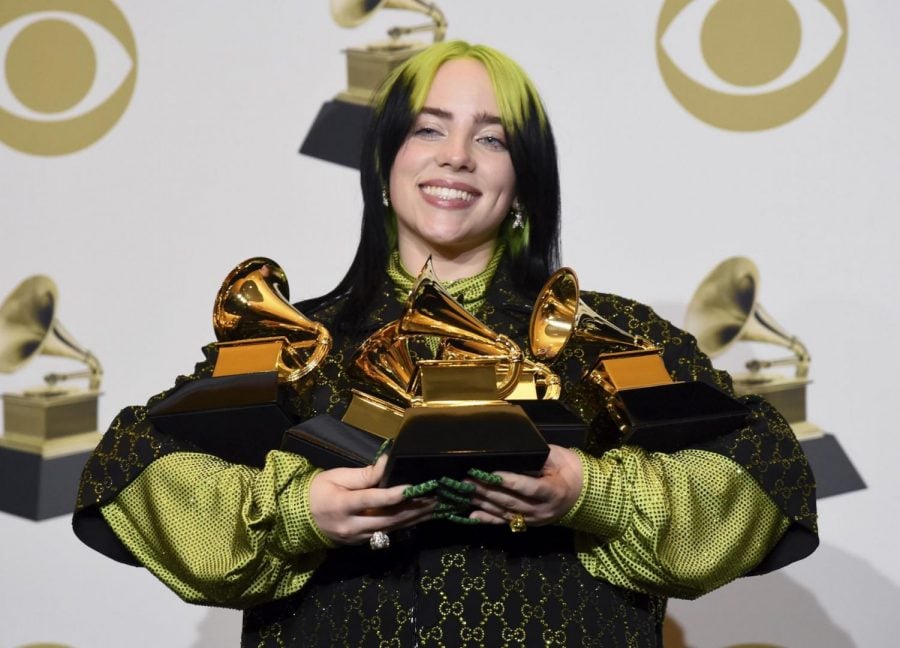 Billie Eilish poses in the press room with the awards for best album and best pop vocal album for "We All Fall Asleep, Where Do We Go?", best song and record for "Bad Guy" and best new artist at the 62nd annual Grammy Awards at the Staples Center on Sunday, Jan. 26, 2020, in Los Angeles.

During award show season this year, everyone’s eyes were on Billie Eilish, the 18-year-old pop star who swept the 62nd Annual Grammy Awards Ceremony where she won five of the six awards she was nominated for.

But things are bittersweet for young Eilish as she has come under fire for comments she made criticizing rap music, sparking backlash from fans, journalists and musicians alike.

In an interview with Vogue Magazine, Eilish said, “There’s a difference between lying in a song and writing a story, there are tons of songs where people are just lying. There’s a lot of that in rap right now, from people that I know who rap…that’s posturing, and that’s not what I’m doing.”

Once the interview was released, Twitter blew up, calling out Eilish for her criticism of a genre that is so separated from her own category of music. The clash between her fans and her dissenters brought up important issues that deal with celebrities’ rights to opinion and celebrity responsibility when speaking publicly.

“I don’t think she was trying to call out the whole rap culture,” said Kimo Smith, a fan of Eilish, “I think she was just talking about her friends and I think if it had been any other music genre with the same scenario it would’ve been okay too.”

Celebrities and other public figures whose words have influence and capital should be thoughtful when discussing topics such as these. Though I believe she meant no harm in her comments, she lacked specificity and in turn, condemned a significant segment of that music genre.

Eilish is entitled to her view, but part of her responsibility is acknowledging the inconsistencies in her own music and the ‘stories’ she tells through song. In her hit song, ‘Bad Guy’, Eilish claims to be the “might seduce your dad type,” which seems unrealistic considering the age she was when she wrote these lyrics.

“I’d encourage Billie, who is a wonderful talent, to expand the boundaries of the hip-hop artists that she ‘knows’ and music to which she has listened, so as to more fully grasp the scope, depth, and breadth of brilliant hip hop music that many talented-at times uncelebrated- rappers around the world are weaving into their art and craft,” said Dre McKenzie, who has worked for music industry giants like Universal Records and Sony BMG Entertainment. “Not only might this change her mind, it may also allow her to grow artistically and personally from learning from these artists and their diverse cultures, perspectives and experiences.”

Eilish’s lack of acknowledgment of the influence that black culture has on almost every aspect of how she presents herself, yet her eagerness to bash rap culture shows a lack of awareness of her role as someone benefiting from the ideas and aesthetic born out of the rap and hip-hop movements. Lies, violence and sexism are found in the lyrics of every genre of music from country to alternative, though it has always targeted rap artists at disproportionate levels. The negative reaction after Ice T’s song, “Cop Killer”, that expressed his distrust of the LAPD based off his own experience of racial profiling and police brutality, was condemned from citizens everywhere and even from the White House, where it was publicly objected by President George H. W Bush.

“Country, metal, punk and other forms of musical genres dominated by white people have a history of problematic lyrics,” said Evan Moore, a professor in the College of Communication at DePaul. “Violent lyrics aren’t exclusive to rap or hip-hop music. It’s easy to demonize a black art form, so I see why Eilish made such a bad-faith argument.”

The dated attempt to target hip-hop music as sexist, violent, vulgar or showy is one that has long been used to belittle the genre of music and its artists that are responsible for much of modern pop culture.

It’s no secret that Eilish has been influenced by rappers and hip-hop artists, both in the music she likes and how she chooses to present herself. Eilish added her own quirky, neo-goth style to the iconic looks served by rappers like Missy Elliott. The bagginess of her clothing is a conscious choice she makes to draw the attention that would be paid to her body and redirect it to her music. While I admire the impact she has on young people, picking what she wants to adopt or discard from rap culture presents a privilege that is unique to her experience as someone living outside the boundaries of that genre.

“[Eilish] cozying up to rap music during her career ascension and then discarding it once she got what she wanted is a historical trajectory often used by white musical artists,” Moore said.

The troubling question of separating the art from the artist is one I have debated for years to no avail. Giving our favorite artists the benefit of the doubt often comes more easily than holding them accountable, though the latter is significant in determining the inconsistencies in the art we enjoy and the morals we try to live by.