How lack of sunlight can harm our bodies and minds 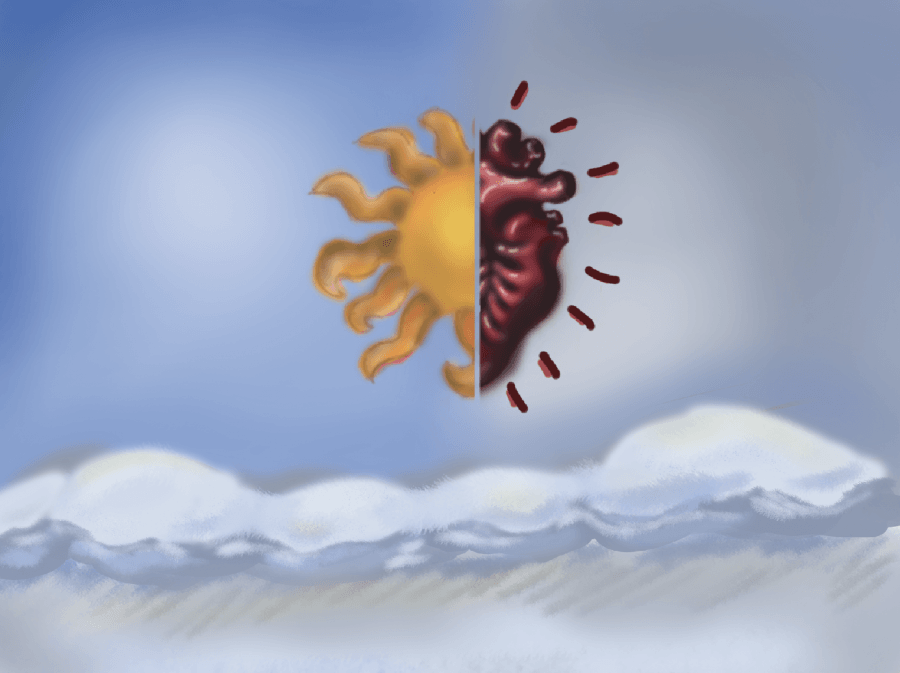 From the Coronavirus to impeachment trials and now to record-breaking weather, the first months of 2020 have been gloomy in more ways than one.

So far this year, Chicago has already broken the record for the amount of consecutive cloudy days. From Jan. 23 through Feb. 2, Chicago had the longest cloudy stretch in 22 years, dating back to 1998. According to the Weather Channel, the clouds were due to high pressure weather systems in the arctic regions, blanketing the Midwest.

Although January is usually a gloomy month in Chicago, this significant lack of sunlight can be detrimental to both physical and mental health.

When you’re basking in the sun, the lens in your eyes pick up on the ultraviolet light and moves it onto the retina, according to the U.S. Library of Medicine. This triggers the release of serotonin, a hormone that can elevate mood. Conversely, darker lighting releases melatonin, a hormone that helps you get to sleep, said Austin Lim, a neuroscience professor at DePaul.

“There is a competing hormonal process that is going on at the same time so both melatonin and serotonin are synthesized by the same precursor and sunlight dampens melatonin production. Because of that, you might end up with more serotonin,” Lim said.

Along with the production of serotonin, sunlight also provides the body with vitamin D, which helps build strong bones. Vitamin D might also decrease the risk of certain cancers. A study by the Clinical Journal of American Society of Nephrology found that people living in areas with fewer daylight hours have a higher chance of developing colon, ovarian, prostate and pancreatic cancers.

However, because of the shorter days in winter, your body is already less susceptible to serotonin. Adding on a record amount of cloudy days means even more gloom.

Slowing down the production of serotonin could mean an increase in Seasonal Affective Disorder (SAD).

“Seasonal Affective Disorder is definitely a thing and is absolutely a health risk that some people are more likely to experience during winter months,” Lim said.

The disorder  usually starts in late fall/early winter and can go all the way to late spring/early summer. People with SAD usually have more SERT, which is a protein that helps with serotonin transport, according to the U.S. National Library of Medicine and National Institutes in Health. If you have higher protein levels, this means that you have lower serotonin activity.

Because of the light and dark changes, SAD is also known to disrupt the body’s circadian rhythm, according to the U.S. National Library of Medicine. Symptoms can include low energy, mood swings, withdrawing from social situations and a change in eating habits.

Due to the Earth’s tilt, studies suggest that people living farthest away from the equator in the northern hemisphere are more susceptible to Seasonal Affective Disorder. In order to combat this, people in northern latitudes consume more vitamin D in meals, Lim said.

“The farther north you go, the longer the nights and shorter the days, there are certain populations that are living in these northern countries who, in the winter, have like 17 or 18 hours of nighttime so they’re not getting a lot of sun but they’re still getting a lot of vitamin D because it is part of their diet,” he explained.

Treatments for SAD vary and can include different combinations of antidepressants, light therapy, vitamin D and counseling, according to the National Library of Medicine.

DePaul Junior Viany Ortiz only noticed the record-breaking, consecutive cloudy days when it finally broke and the sun began to shine once more.

“I didn’t really notice the cloudy days when they were happening. I noticed when we finally had sun,” Ortiz said.

Even if they didn’t realize the reason why at first, some DePaul students were hit hard by the lack of sun.

“I hadn’t honestly noticed that the sun wasn’t out for ten days,” said Carolyn Brinckwirth, a junior at DePaul. “Actually, you telling me today that we went for ten days without sun completely explains how badly I felt.”

“It wasn’t until my friend posted an Instagram story that I realized I had not seen the sun in 10 days and that is why I was feeling so bad,” says  Julia Boucher, a senior at DePaul. “I actually started taking vitamin C tablets because of it.”

Both Boucher and Brinckwirth showed symptoms that were consistent with the lack of  serotonin and the increase of melatonin people may have experienced.

“I felt sluggish, sad and just generally my mood was poor, ”said Brinckworth.

DePaul students weren’t the only ones who noticed the lack of sunlight. Chicagoans responded to the record-breaking weather with an outpour of memes.

Like Ortiz, some of the memes highlight seeing the sun for the first time after the long stretch while others focused on the cloudy days themselves.

Whether it is cloudy or not, there are still benefits in getting outside, including reducing some of the side effects of Seasonal Affective Disorder.

“There are a number of studies that find that interaction with nature, being in natural environments as opposed to your regular urban environments, is highly important for individuals primarily because that’s how we evolved,” said Barbara Willard, an associate professor at DePaul who oversees the environmental communication minor. “So we have a natural affinity for some types of natural features.”

Whether you go to the lakefront or take advantage of the forest preserves around the Chicagoland area, getting outside can be essential to your health.

“Being outside has been shown to produce positive mental states, improve our physical health and improve personal relationships,” said Willard.

While it’s great to get outside, winter in Chicago is notoriously brutal. However, by taking small steps, you can start making a difference.

Remembering to get enough sun in the winter and limiting the amount exposure to sun in the summer is hard work, but very beneficial.

“Moderation ends up being the key to everything. All of these ancient Greek medical people came to that conclusion so long ago and after all of these advancements we’ve figured out through science, we’ve also come to that same conclusion,” Lim said. “You want a balance of everything and sunlight is definitely one of those things.”

As the clouds finally parted on Feb. 2, the sun made its triumphant return, painting the retreating clouds with beautiful pinks and oranges.