Second half surge soars DePaul over Xavier, securing a share of the Big East title 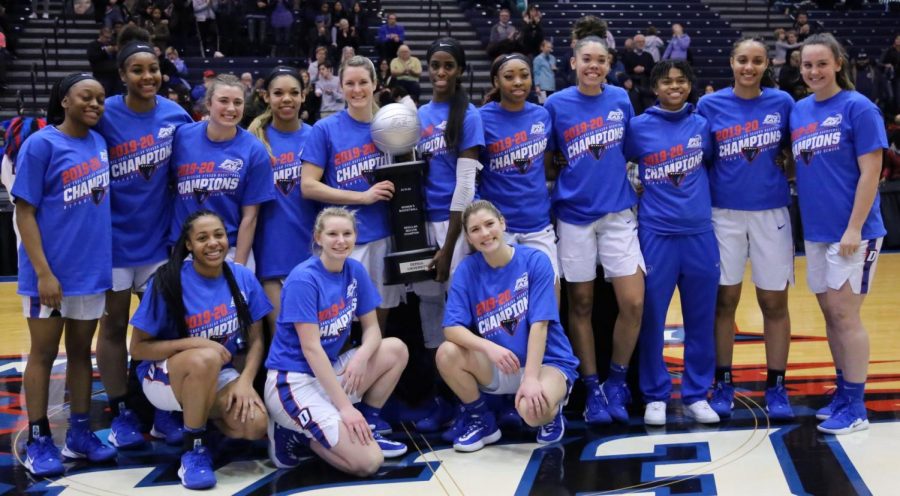 The DePaul Women's Basketball team poses with the Big East regular season trophy after a 97-63 win over Xavier on Sunday.

The 13th ranked DePaul Blue Demons have everything to play for in this late-season push to the Big East tournament, with Sunday’s matchup with last-placed Xavier setting them up to clinch a share of the Big East regular-season title, get another win as they climb the national polls and honor seniors Kelly Campbell and Chante Stonewall in their last games at McGrath-Phillips Arena. After a neck-and-neck first half, the Blue Demons pulled away to a sizzling 97-65 final score. With the win, the Blue Demons have clinched a share of the Big East regular-season title with three games to play.

The first quarter started out blazing for DePaul who, lead by ten Sonya Morris points, jumped to a 15-2 start on the Musketeers. Clicking on all cylinders, the offense found their first two three-pointers in the bottom of the net along with four trips to the free-throw line in four minutes.

Things fell stagnant for a three-minute stretch where the Blue Demons failed to score. Despite that, the defense forced nine Xavier turnovers in the first quarter to hold on to a 23-13 lead after ten minutes.

In the second quarter, things swung in the favor of Xavier. As DePaul couldn’t get a shot off, Xavier took the first eight points of the second quarter with four different players scoring. Head coach Doug Bruno was forced to call timeout after a Dunham layup cut the game to 23-21 with 6:50 left in the half. The Musketeers forced their way inside, scoring 16 of their first 23 points in the paint.

DePaul started just 2-for-9 from deep. What sparked the offense out of the initial timeout was Held’s ability to get in the paint for open jumpers. Held scored 13 points in the second quarter and lead the Blue Demons with 17 in the first half.

Held had 13 free throw attempts on the day and was fouled nine times, both career-highs. “I was just trying to take what the defense was giving to me and then I was able to focus,” Held said. She finished with 26 points on 50 percent shooting.

Xavier wouldn’t be silenced at all in the first half. 13 of their 16 first half buckets came in the form of layups. The Musketeers were lead by Carrie Gross and A’riana Gray who combined for 22 points in the first half. DePaul lead by a thin margin of 42-37 heading into the second half.

The third quarter started like how the first quarter started. Lexi Held took a charge and the defense forced two throwaways that lead to easy buckets. Morris hit a three right in a defenders face, taking an 11 point lead just two and a half minutes into the second half. The sophomore duo of Held and Morris paced the team in scoring.

DePaul flourished but didn’t extend the lead to more than 15 as Xavier guard Morgan Sharps scored seven quick points in the quarter. That is until DePaul went on a 12-0 run fueled by Church, Held and Stonewall. The Blue Demons closed the quarter at 73-56, they forced 20 turnovers through the first three quarters.

“We executed better offensively and we’ve had a couple of rough third quarters in the past so we were really just making sure we execute and defend as well,” Campbell said.

Kiara Dallmann would score on a layup to increase DePaul’s lead to a game-high 23 points with 8:35 left and the Blue Demons wouldn’t look back.

It was Kelly Campbell’s turn to put up some senior day magic. The guard hit three 3-pointers in the second half to put the game in a coffin at 88-60 with 4:35 left. She added seven assists and three rebounds to her nine points.

A minute later, Campbell found Stonewall for a layup, on the ensuing dead ball, the seniors embraced as they subbed out for the final time at McGrath-Phillips Arena. A standing ovation roared as the duo went to the bench where they were met with hugs from Bruno.