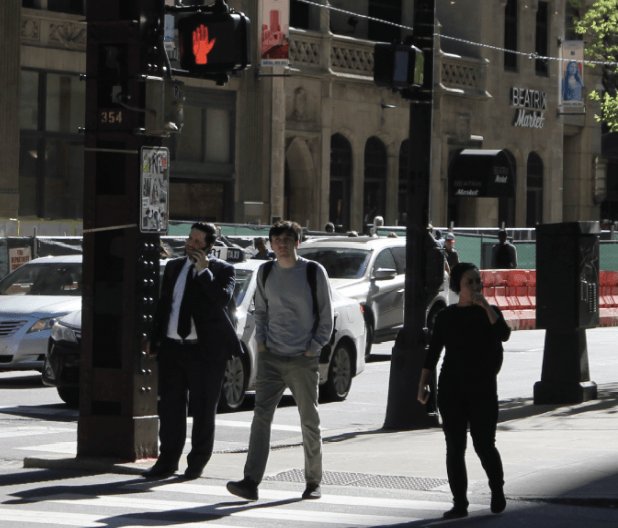 Students and professionals alike cross the street. At the Loop Campus, the buildings are integrated among office buildings, restaurants and stores.

When Jasmine Boubas was a freshman at DePaul, she and a group of friends were followed and verbally harassed by a group of male students while walking back to their dorms from a party.

“It was uncomfortable and quite scary witnessing such aggressiveness from a large group of boys,” she said.

Reports of stalking, made by or about DePaul students to the Title IX coordinator, have been on the rise for the past three years, according to the annual Preventing Sexual Violence in Higher Education Act report.

Eleven reports of stalking were made in 2016. In the most recent report, released in 2018, 26 reports were made. Most of these reports were filed directly with DePaul’s Title IX Coordinator. Only seven have been made anonymously since DePaul began aggregating the information for the 2017 report, which details reports made in 2016.

It’s unclear whether the rise in stalkings reported indicates a rise in occurrence or in reporting.

Kathryn Statz, the new director of gender equity, could not be reached for comment in time for this story.

Each year, DePaul is required to report information regarding reports of stalking, sexual violence and domestic/dating violence to the state in compliance with the Preventing Sexual Violence in the Higher Education Act.

Those numbers are released each November and have been made public on DePaul’s website since 2017, when it first became required to aggregate the reports.

Domestic and dating violence reports appear to be declining, though very slightly. In 2016, there were 57 reports made, both to the Title IX coordinator and through confidential channels – the most recent report shows 52.

The spike — amounting to a 548.5 percent increase in confidential reports of sexual violence alone — was reported by The DePaulia last year.

When asked what accounts for this large jump in numbers, former Title IX coordinator Jessica Landis, who left the university in May 2018, said that the office was able to “find some additional information from University Counseling Services, which is one of our confidential resources.” She was not able to confirm how that information was found.

A small number of reports made end up being investigated, in all the listed categories. Of the 93 reports of sexual violence made in 2018, only seven investigations took place.

Other information the report details includes the number of investigations, referrals to law enforcement, Student Conduct Process matters, sanctions and requests not to proceed.

Most agree that on campus grounds, DePaul is fairly safe.

“As a woman, I never feel safe at night,” said Anne Arnold, a DePaul senior. “But on campus, I generally feel a little bit safer because there are populated buildings with security guards.”

Still, some say that DePaul can do better to protect students.

“I have had friends, freshman year, roofied [who] came back to the dorms nearly unconscious, and security did nothing to help,” Arnold said.

“I think having more security walking around rather than just sitting in cars would make campus feel safer,” said Frankie Plurd, a DePaul freshman.

DePaul could not be reached for comment in time for this story.

Like DePaul often promotes, the school’s campus is largely integrated into Chicago. Part of that is accepting that some of the city’s crime may seep onto campus.

“Because we’re in an urban environment, I think there is a higher risk for situations that test the safety of DePaul, and therefore, it should be a top priority of the school to make sure students feel safe,” Arnold said.