REVIEW: ‘Portrait of a Lady on Fire’ reinvents wheel of love 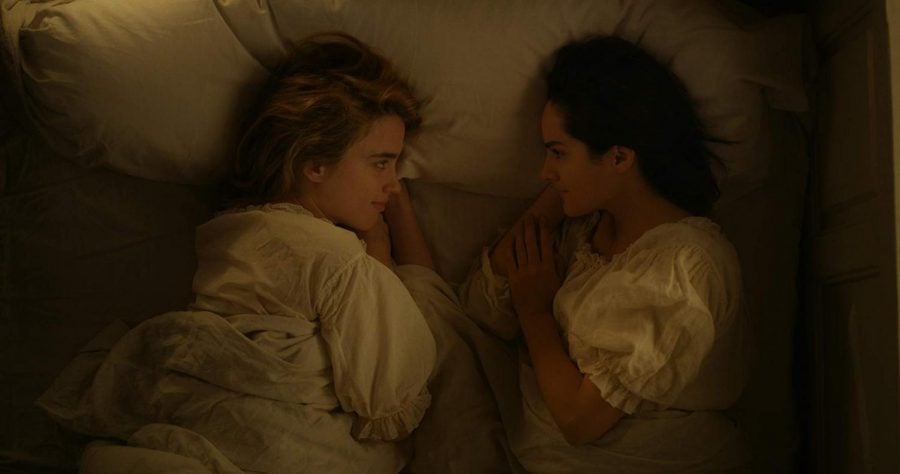 Heloise (played by Adele Haenel) and Marianne (played by Noemie Merlant) lie in bed together in Celine Sciamma’s “Portrait of a Lady on Fire.”

“This is a film for Chicago,” director Céline Sciamma said with a chuckle as she sat down for a post-film discussion. Her newest feature, “Portrait of a Lady on Fire” was shown in an advanced screening at the Music Box Theatre on Wednesday night. Her comment came after to the uproarious response to the film, which had ended just moments before.

“Portrait of a Lady on Fire” is a drama that reinvents all notions of love and relationships, and presents these experiences in a new light. Equality is the name of the game for Sciamma’s film.

The film is set in the 18th century, where queer love was illegitimate and marriage was often a business proposition and nothing more. Marianne (Noémie Merlant) is hired to paint the portrait of an aristocrat Héloïse (Adèle Haenel). The portrait is to be sent off to the man Héloïse is to marry, but Héloïse is not pleased by the marriage and is refusing to pose for the portrait. Marianne’s task is to accompany Héloïse on walks by day, secretly observing her, and then paint the portrait from memory by night. Marianne does so, but secret looks become looks of adoration, and those looks are returned.

When Héloïse’s mother leaves for a few days, the two women are left to their own devices, and quickly, but beautifully, begin a romantic and sexual affair that had been building since the pair first set eyes on each other. They are a perfect match intellectually, physically and emotionally. In this relationship, there is no dominance. The women are equals, and they come together not because one woman pursued the other, but because they are drawn to each other, like magnets.

This film feels contemporary. The  dialogue is minimal, but sharp, quick and purposeful, with humor poking in every now and then. There is almost no soundtrack to the film, with most of it coming from the environment surrounding Marianne and Héloïse.

With little dialogue and no soundtrack, the film relies on its visuals to deliver its story. And deliver, it does. Each shot could be a painting hanging in the Louvre. The colors are bright yet simple, and each character wears only one or two costumes throughout the whole film, allowing the audience to focus entirely on the story, not on the symbolism behind the costumes and sets.

Merlant and Haenel each deliver exquisite performances that complement each other without overtaking each other. This leaves room for audiences to empathize with the characters, creating a deeper experience of the film.

In an interview with Elizabeth Harris for The New York Times, Sciamma says that “there’s all this surprise that lies within equality, that’s the new tension. You don’t know what’s going to happen if it’s not about the social hierarchy, gender domination or intellection domination.”

In a world where gender roles are often assumed, even in a progressive relationship, it is refreshing to see a relationship that is truly equal. Sciamma is right. The tension that comes with watching the relationship between Marianne and Héloïse is one unlike anything I’ve ever seen. Their relationship is slow-burning, but once the fire is lit, it is not easy to put out. Watching them fall in love is suspenseful, moving, and inspiring. For me as a queer person, one of the best parts of the film is the way that Sciamma, a queer woman herself, understands and depicts queer romantic relationships. She was able to create a film that is made for us, and that understands our experiences.

In her interview with Harris, Sciamma goes on to say that “each time people say, ‘It’s love, it could be two men, or a man and a woman,’ I’m glad they feel that way, that they could fit into this imaginaire and into this politics of love. But it’s ours. And they’re welcome.”