DePaul wins first game in over a month, 74-68 over Georgetown 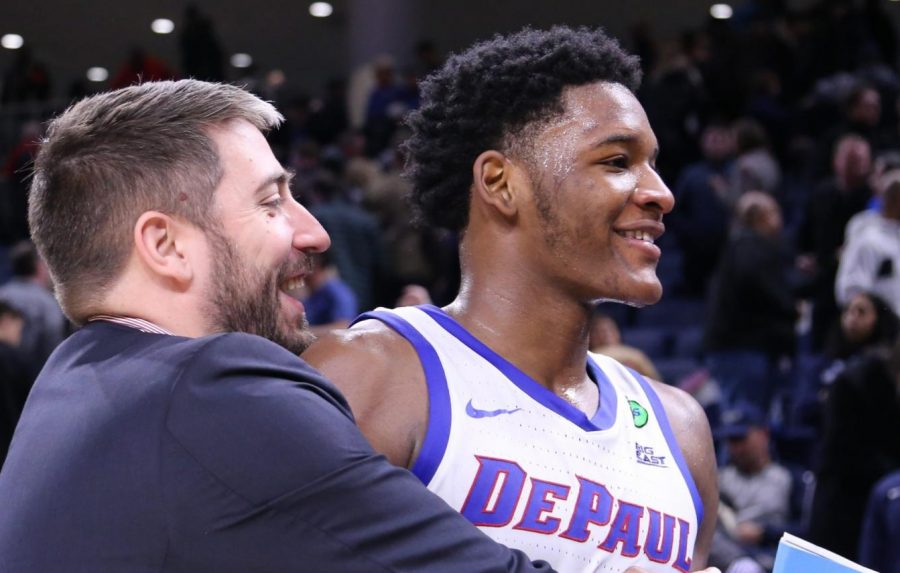 In the early going of Saturday’s contest with Georgetown, the Blue Demons (14-13, 2-12) looked to have found some of the energy that head coach Dave Leitao said the team has lost since they entered conference play.

And this time, it lasted a full 40 minutes.

DePaul was able to keep the wheels on the wagon on their way to a 74-68 victory over the Georgetown Hoyas (15-12, 5-9), showing some signs of life in a season that’s becoming harder and harder to salvage.

“One of America’s biggest understatements is how much we needed to win,” Leitao said.

DePaul struck first and maintained a comfortable lead for the first 8 minutes. Eventually Georgetown would find a rhythm and the teams traded small leads through the end of the half.

As Georgetown was finding momentum, Georgetown head coach Patrick Ewing earned a technical foul with little more than six minutes to play in the half, turning some energy back over to the Blue Demons. Just a couple minutes later, DePaul freshman Romeo Weems unleashed a nine-point run with back-to-back-to-back three pointers. Weems would end his night 4-of-5 from three-point land.

“My teammates always tell me just to be aggressive and play my game,” Weems said. “I feel like they just found me tonight and encouraged me to shoot my shot and play my game.”

DePaul would go into the half tied with Georgetown, but got things going quickly in the second half. For the first points of the final 40 minutes, Reed corralled a rebound under the basket and slung it down the court to Weems for a runaway dunk.

Defensively, the Blue Demons came out of the half with fast feet and even quicker hands; forcing extra passes, tipping passes and shots enough to keep an injured Georgetown team even more out of sync. This was a welcome change for a team that has struggled for the better part of two months at maintaining some intensity on defense.

“I don’t know if it was adjustments,” Leitao said. “It’s just getting better and doing better at what we need to do.” He said one of the key practices going into this game had been particularly energetic.

Back-to-back threes for Georgetown put the Blue Demons back on defense and the programs traded one-point leads until junior guard Charlie Moore hit from beyond the arc to kick start a short run.

The teams continued trading moments of explosive offense and stingy defense until  Weems buried his fourth three of the game to make the score 64-57 with less than 5 minutes to play. From there, the Blue Demons hung on as the game slow-burned to a foul-heavy end.

This is DePaul’s first win in more than a month, and just their second of league play.

“Warms my heart for these guys here and everyone in the locker room to get that feeling again,” Leitao said.