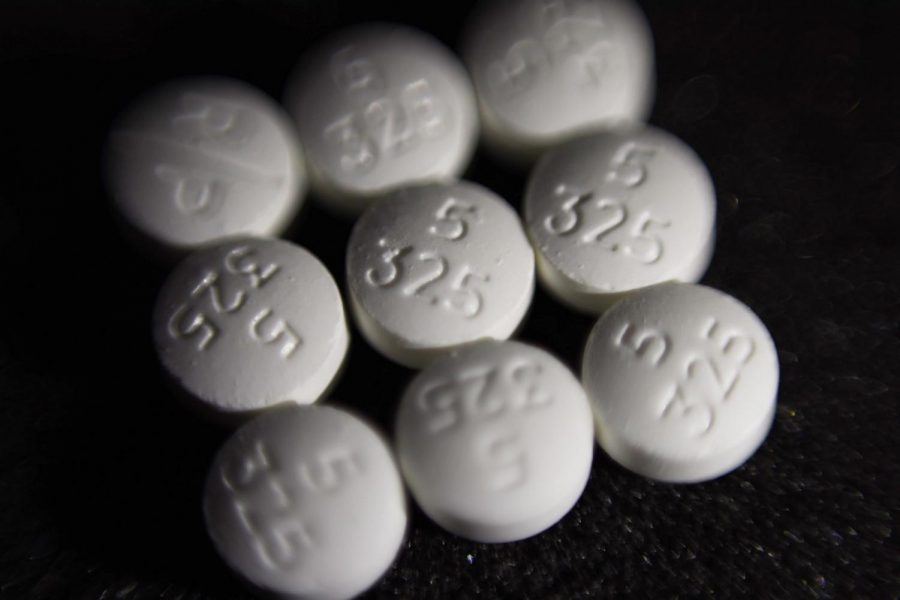 This Aug. 15, 2017 file photo shows an arrangement of pills of the opioid oxycodone-acetaminophen, also known as Percocet, in New York. Dozens of Ohio local government leaders gathered privately Tuesday, Feb. 11, 2020, to discuss how to divide millions of dollars from a prospective opioid settlement. The goal is to position themselves to enter settlement talks with drugmakers as a united front with the state, which would be a first nationally.

As Purdue Pharma moves through courts following their Sept. 16 bankruptcy declaration, other opioid manufacturers continue work through more than 2,500 lawsuits with various states for their role in the opioid epidemic.

Opioid distributors AmerisourceBergen Corp, McKesson Corp and Cardinal Health Inc. offered to pay $18 billion over the course of 18 years – a settlement promptly rejected by 21 states as well as Puerto Rico and the District of Columbia, according to a Wall Street Journal report.

“I can’t speak to the motivation of state officials, however, I assume that it is due to their desire to collect more money than was offered in the settlement,” said Dr. Richard Blondell, physician and vice chair for addiction medicine at the Jacobs School of Medicine and Biomedical Sciences at the University at Buffalo. “When the dust settles, I expected that the only real winners will be attorneys and their fees.”

States want between $22 and $32 billion from distributors –  in a shorter amount of time originally proposed as well. The settlement only covers disputes with distributors, as claims against manufacturers and pharmacies remain unresolved.

Despite Purdue Pharma’s bankruptcy declaration, Blondell said the company is still “a major player in the pharmaceutical industry.”

“They may reach a settlement with those who are bringing claims against them in courts; however, it is unlikely they will have to pay for the full cost for the part of the opioid epidemic associated with their over-promotion of OxyContin,” Blondell said. “Legally, it is a complicated issue. It is unlikely that prosecutors will want to put Purdue out of business through bankruptcy. You can only get so much juice out of a single orange.”

Kenneth Leonard, director of the Clinical and Research Institute on Addictions at the University of Buffalo, said “much of the 2019 data is not available yet.”

“In general,  prescriptions for opioids have been declining, and the deaths due to prescription pain medications appear to have plateaued,” Leonard said. “However, most of the opioid-related deaths since about 2015 have been due to heroin or fentanyl, usually mixed with heroin.”

Dr. Steven Aks, immersive physician and head of toxicology at Cook County Health, said fentanyl is a “synthetic opioid” that is a “cheap replacement for a naturally-derived substance like heroin.”

“Much of this illicit fentanyl is made in clandestine labs such as those in China, and make its way to the streets in the US,” Aks said. “It’s important to remember that fentanyl is a very safe and effective medication used in the hospital all the time.  the illicit fentanyl, or fentanyl analogues are what are found in street drugs.”

Leonard said it is difficult to say what direction the epidemic is heading given the “cycle to drug epidemics.

“There is a rapid increase in the use and consequences of a drug,” Leonard said. “There is a public mobilization of prevention and intervention forces to address the epidemic. There is a gradual plateauing of drug use, and then a steady decline to a level which is still higher than the level before the epidemic.”

Leonard added that Erie County, New York appears to be on the “declining side of the cycle” as a result of  initiatives from county commissioners, community coalitions, hospitals and addiction treatment centers.

“We are far ahead of most other urban areas, and many rural areas do not have the resources to launch this kind of initiative,” Leonard said. “As a result, I would expect continued increases in deaths due to heroin and fentanyl for some time, and perhaps some increases in prescription pain medication deaths is certain areas of the country for at least several more years.”

Aks said there was not much change observed for opioid fatalities in Cook County in 2019.

“The fatalities in 2019 were about the same as in 2018,” Aks said. “Again, the deaths are approximately 80 percent due to street drugs and only 20 percent are pharmaceutical products involved.”

Blondell said that while litigation is still pending, there have been some policy changes for involved companies.

The failed settlement comes as part of increased efforts to reach an agreement ahead of the trial set to begin in New York on March 20. The New York Times reported regardless of what the final amount ends up totaling, it will not be enough to “heal long-term effects of the opioid crisis.”