With enrollment down, some required courses are not being offered as frequently which could lead to later graduation dates. 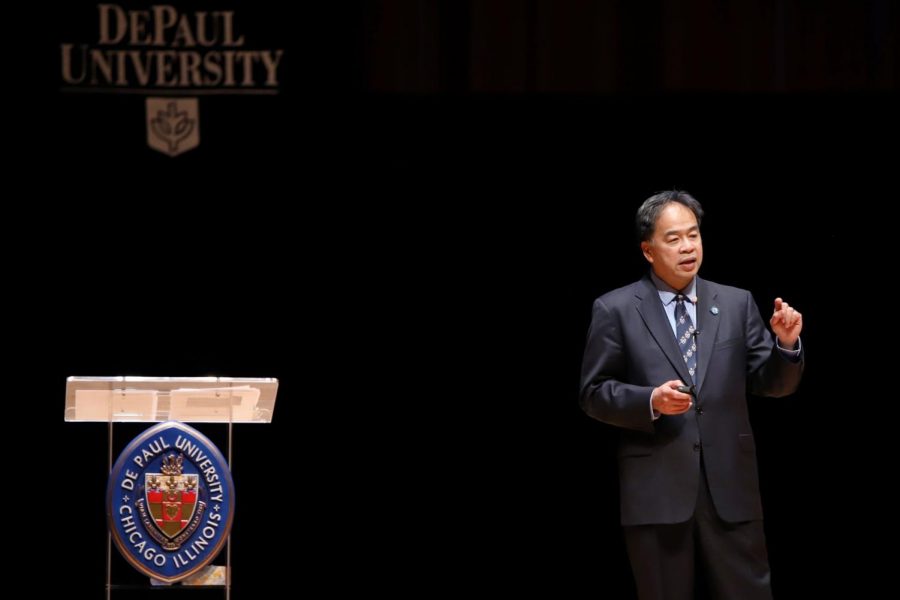 President A. Gabriel Esteban at the 2019 State of the University address.

As enrollment continues to decline at DePaul, students are seeing this effect in the form of fewer classes. The university is offering 797 fewer classes in Spring 2020 compared to Spring 2018, with declines in almost every program, records from the university registrar show.

The exceptions are the School of Music — which had a new building open on the Lincoln Park campus in 2018 and will offer 749 classes next quarter versus 414 in Spring 2018 — and online classes in some colleges. Otherwise, every program saw a decrease.

However, the numbers vary by campus – some programs have fewer classes on one campus but more on another or online.

When classes only have a small number of students enrolled, departments typically have to cancel them.

There’s no central scheduling system, and Wright said there hasn’t been any directive from upper administration to reduce the number of classes offered in order to save money.

However, the university is expecting a net tuition revenue shortfall of $14 million for the current fiscal year, DePaul President A. Gabriel Esteban said during a town hall last Tuesday, Feb. 18.

Although Fall 2019’s freshman class was the largest in DePaul’s history and the university exceeded its graduate student enrollment goal by 5 percent, it missed several of its other goals.

“We want to continue to invest in new programs,” Esteban said. “We’re trying to manage whatever assets we have to keep our costs in check.”

Some departments are expecting classes to be limited in upcoming quarters, partly because of competition and increasing budgetary concerns, said Ahmed Zayed, chair of the math department.

“In fact, we’re told that if you offer class with fewer students, maybe you should offer it every other year,” Zayed said. “Sometimes you cannot do that because there are some courses that students have to take to graduate.”

For example, if only six or seven students are enrolled in a required class, the university would suggest they can’t offer that class, but without that class, those students can’t graduate, according to Zayed.

For some students, it’s not just a matter of specific, required classes not being offered every quarter, but also having fewer elective options.

When Riley Cox, a senior communication studies student at DePaul, logged into Campus Connect earlier this month to sign up for classes, she said she struggled to find anything that both met her graduation requirements and fit her schedule.

She’s looking to fill her elective requirements for her major, but said most of her options are either filled, too far or at inconvenient times for her.

Because the College of Communication is located on the Loop campus, most of Cox’s program’s classes are a long commute and therefore don’t work with her schedule, she said.

Her adviser’s solution has been to have her complete minors to fill her electives, she said, as well as take classes she has no interest in or would otherwise need if she had more communication studies classes.

“By adding more minors and taking classes I don’t want to take, I’ll graduate [on time],” Cox said. “But it’s a matter of how many bullshit classes I have to take.”

In addition, transfer students sometimes cannot graduate on time in part because of required classes not being offered every quarter, or needing prerequisites before they can take those classes, and then having to wait for them to be offered again.

Emma Nassif, who transferred into DePaul’s comedy filmmaking program, said she will not be graduating on time partly because of the schedule for when classes are offered — though she also said she wasn’t that surprised or upset by that.

“I get it’s hard to find teachers for certain niche programs,” Nassif said.