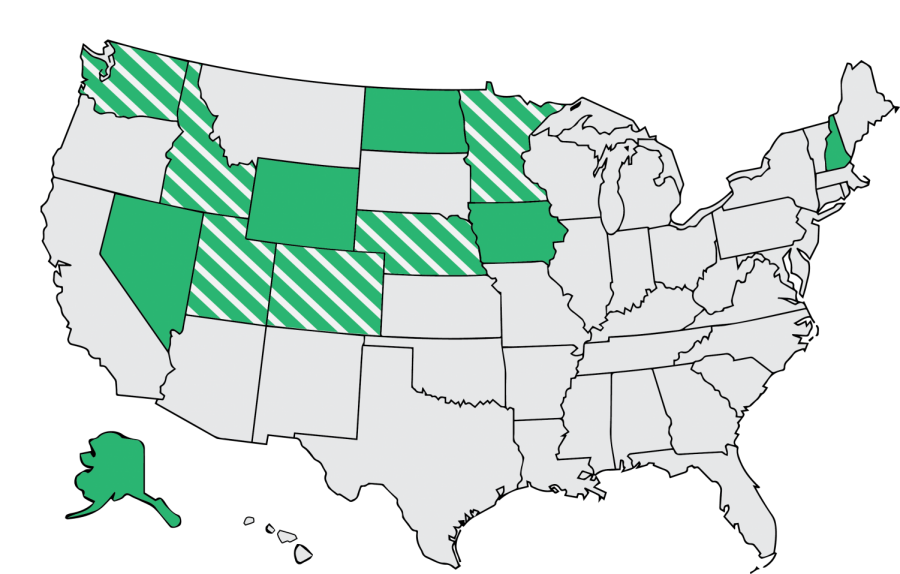 Trump’s four years are coming to a slow end, and the 2020 race for president is here.

Throughout the next couple months, America will find out which of the many Democrats running  will win enough state delegates to be voted in as the nominee to challenge President Trump this upcoming November.

Both Iowa and New Hampshire recently had their primaries. The biggest surprise from Iowa, amidst the counting delay and errors, was that Bernie Sanders and Pete Buttigieg virtually ended with a tie, with Buttigieg getting 13 delegates and Sanders getting 12 at the end.

Although Buttigieg clinched Iowa, it was predicted that Bernie Sanders would do well in New Hampshire — and he did. Sanders won New Hampsire’s primary election, marking his first victory while Buttigieg came in at a close second.

Amy Klobuchar had a surprisingly strong outcome in New Hampshire, but neither Joe Biden or Elizabeth Warren met the threshold for pledged delegates.

As the candidates continue to make their cases and voters weigh in, here’s everything you need to know about the presidential primary process.

When it comes to the election process, state governments run primary elections — not the parties. There are typically only two parties considered by most voters: Democrats and Republicans. Third party candidates might run as Libertarian, Green or Independent party candidates, but usually these candidates have a hard time gaining traction.

A primary election is just like a general election: voters go to a polling place, take a ballot, vote for their favorite candidate and leave. The votes are counted and candidates get a certain portion of the delegates based on their percentage of the vote. Typically each state gets the same amount of delegates as they have Congressional representatives and Senators.

“The real action this year is in the democratic primaries,” said Richard Craig Sautter, a DePaul professor with expertise in elections. “While the popular vote is a good guide of who has the most support in each party, the number of delegates is what really counts. The candidate who earns a majority of delegates will win the nomination at the national convention. If no Democrat has enough delegates to win on the first ballot at the convention, then ‘Super-Delegates’ or Democrat elected officials, also get to vote in subsequent ballots. This primary process will continue until early June by which time all the states and U.S. Territories will have voted.”

Some states like Iowa and Nevada hold caucuses instead of primaries.

Caucuses are private events run by the parties in precincts across the state — not by the state government. This process takes hours and not minutes in contrast to primaries.

Caucuses give parties more flexibility in determining the rules, including who can vote in them. A voter must physically show up at a site in that state (Iowa had 1,700 sites), stay and gather with voters for that same candidate. In Democratic caucuses, there are no ballots casted, and votes are determined by people standing in different groups around one large room.

“The caucuses certainly play a very significant role in the election process,” said Mike Schmidt, a sophomore political science major at DePaul. “The early caucuses often set a tone for the rest of the process. The structure is not well known and not everyone knows the distinctions.”

Both primaries and caucuses are predicting tools for the general election and usually an easy place for candidates can gain initial momentum.

There are two candidates running against Trump  — Bill Weld and Roque De La Fuente. Trump will likely be the Republican nominee for the national election.

Super Tuesday is when most states and territories hold their primary elections. Some of the biggest states, like California and Texas, will hold their elections on that day.

Super Tuesday is when candidates win most of their prospective delegates for their party’s convention. About 40 percent of all delegates can still be won for Democrats, while 30 percent is left for Republicans.

This year, Super Tuesday will be on March 3.

There are eight people still in the Democratic race: Joe Biden, Michael Bloomberg, Pete Buttigieg, Tulsi Gabbard, Amy Klobuchar, Bernie Sanders, Tom Steyer and Elizabeth Warren. Results from earlier states could easily spread across the other candidates, but there is no all-but-confirmed Democratic nominee quite yet.

With 155 delegates in Illinois still up for grabs — the sixth highest total amongst all 50 states — there will definitely be a clearer prediction for who will win the Democratic nominee after the state finishes its primaries.

An election with this many candidates can often get overwhelming and quite confusing. DePaul junior and political science major, Alex Stamatis, said she thinks it is important for students to vote.

“I think it’s important to get involved in this presidential election because our country has been so politically polarized and it is important to get out and vote for someone who will address issues that are important to you,” she said. “I think some students do not make the effort to learn about the election because it can often get so messy. There are a lot of different candidates with different visions, and if you don’t keep up it can definitely get confusing.”

Students and voters can use websites like isidewith.com and politico.com to read about different candidates and their positions on important topics such as healthcare, criminal justice, education, the economy and climate change.