The ‘soul’ cycle of life 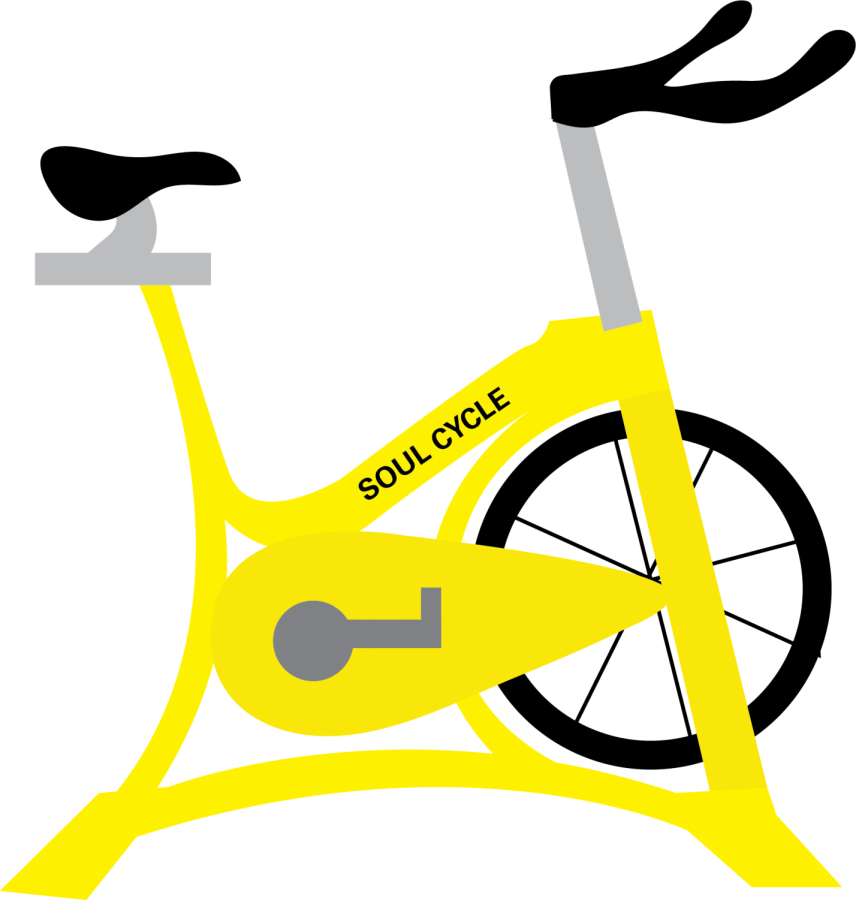 The fitness industry is full of fads. One year hot yoga was the only acceptable form of yoga. The next, pilates was all the rage. Following pilates was Crossfit, which, to some, was the only valid way of working out. Most recently, the biggest fitness trend has been cycling, and more specifically, SoulCycle.

SoulCycle has taken the world by storm and gained a cult following. With 86 locations in the U.S., two locations in London and three in the Chicago area including Old Town, Southport and the loop, it seems like the whole world is talking about SoulCycle. It’s a fitness class that doesn’t just focus on working out or burning calories, but aims to nourish the soul, much like the name suggests. According to its website, “SoulCycle is way more than a workout, it’s a sanctuary. A safe space to ride through whatever you’re facing, celebrate your accomplishments, and sweat it all out on the bike. Emerge feeling stronger, like the best version of yourself-because moving your body changes your soul.”

SoulCycle takes their craft very seriously. From the aesthetic to the rituals conducted in class, SoulCycle stands out. Each morning starts the same at the cycling chain, with a citrus candle burning at the front desk and a friendly receptionist  greeting the riders. The riders make their way into the warm room, which is painted black and  filled with ambient lighting powered by only a few candles. However, SoulCycle has a strict start time; the doors close one minute before the class starts, leaving everyone in the room ready to focus on their ride and leaving their inhibitions on the other side. SoulCycle describes this practice as, “you surrender to the beat of the music and get lost in the energy of the room. You move, you ride, and you push towards the finish line – together.”

DePaul junior Mark Rayski went to his first SoulCycle class in early 2018 out of pure curiosity.

“I first heard about it on social media because a bunch of YouTubers I used to watch were always talking about it,” Rayski said. “I thought if they were going all the time, then I should try it because it was popular, so it had to be a good workout or fun.”

Much like Rayski, a recent graduate from North Park University, Zachary Moore, who is an avid gym goer, had piqued interest in SoulCycle after trying multiple different spin classes; however, he wasn’t hooked instantly. Moore went to his first class in 2018 and just started going back to SoulCycle consistently this past fall.

“[SoulCycle] has a different flow then I had been used to,” Moore said. “They do a lot of different things that other cycling classes don’t do.”

SoulCycle  combines cardio and strength training to deliver a calorie burning workout. On average, riders can burn anywhere from 600 to 800 calories during a class. According to Womenshealthmag.com, cycling is one of the best calorie burning exercises, especially in intervals, which is what SoulCycle focuses on and what sets them apart from other spin classes.

Rayski is a big fan of these SoulCycle-specific rituals as they not only guide him through his workout, but give him a moment to take care of himself mentally.

Another common ritual at SoulCycle is blowing out the candles that illuminate the room. At the end of each class, the instructor will pick a few riders to blow out the candles after they have had a good ride or are celebrating a special event, like reaching 50 rides or even their birthday. Recently, Rayski blew out a candle on his 21st birthday after wanting to do it for such a long time.

“It was super nice, super motivating and a good feeling,” said Rayski.

Moore is one of the many riders who come for not only the intense workout, but the instructors. SoulCycle instructors have to go through rigorous training to not only teach the class, but to motivate the riders to do their best.

“The instructors are super motivating,” Moore said. “They are top-notch and know what they are doing and make it fun because they make it feel like you aren’t working even though you are.”

Ryan Jones has been a SoulCycle instructor at the Old Town studio since 2017 and sees a lot of people come through the studio. He loves to see riders grow from their first visit to when they become committed to riding. Moore and Rayski go to Jones’ class every Tuesday morning for Taylor Swift Tuesday.

“I think people like Soul so much is because it is a physical workout, but also a mental workout,” Jones said. “I want people to know just as much as Soul focuses on physical health, we are also passionate about mental health. It keeps people coming back despite their hesitations.”

While SoulCycle looks great on paper, it can be an expensive endeavor, with each class costing $30. Recently, SoulCycle announced a student discount for student riders, which only costs $20. It also costs $3 to rent riding shoes, but Rayski suggests purchasing your own so they fit perfectly and motivate you to go to class.

“It’s expensive, but it’s worth it,” Rayski said. “The student discount is super nice because they are incentivizing students to go because they focus on mental health, too, in the classes, and I know students struggle with mental health a lot, I know I relate, so it shows that they care.”

Although expensive, both Moore and Rayski agree that SoulCycle is not only an experience like no other but a workout like no other. Regardless of what type of workout, Moore encourages everyone to at least tryout SoulCycle once as it has taught him how to be more healthy in all aspects of life.

“I do feel like it’s worth it at the end of the day,” Moore said. “You only have one body; you only have one life; you should put as much care and love into it as you can.”