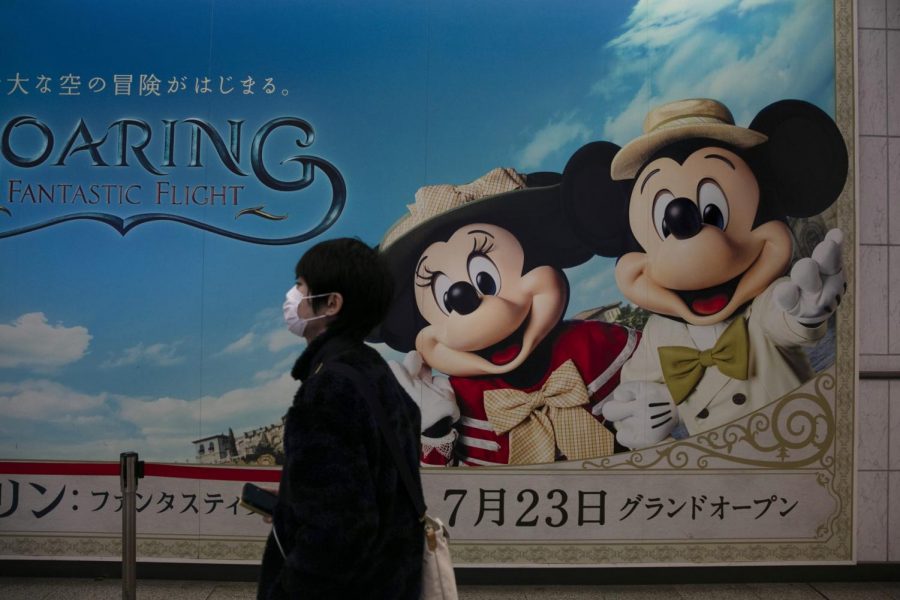 A man wearing a mask walks past an advertisement for the Tokyo Disney Resort at a train station in Urayasu, near Tokyo, Friday, Feb. 28, 2020. The amusement park will be closed from Feb. 29 until March 15 in an effort to prevent the spread of COVID-19.

TOKYO (AP) — A deepening health crisis became an economic one too Friday as the coronavirus outbreak sapped financial markets, emptied shops and businesses and put major sites and events off limits.

The list of countries hit by the illness edged toward 60 as Mexico, Belarus, Lithuania, New Zealand, Nigeria, Azerbaijan, Iceland and the Netherlands reported their first cases. The threats to livelihoods were increasingly as worrisome as the threats to lives.

“It’s not cholera or the black plague,” said Simone Venturini, the city councilor for economic development in Venice, Italy, where tourism already hurt by historic flooding last year has sunk with news of virus cases. “The damage that worries us even more is the damage to the economy.”

The head of the World Health Organization said Friday that the risk of the virus spreading worldwide was “very high,” citing the “continued increase in the number of cases and the number of affected countries.”

Economists have forecast global growth will slip to 2.4% this year, the slowest since the Great Recession in 2009, and down from earlier expectations closer to 3%. For the United States, estimates are falling to as low as 1.7% growth this year, down from 2.3% in 2019.

But if the disease known as COVID-19 becomes a global pandemic, economists expect the impact could be much worse, with the U.S. and other global economies falling into recession.

Part of the problem is that the health measures needed to combat the outbreak — locking down cities and ordering workers and students to stay home — damage the economy.

“This is a case where in economic terms the cure is almost worse than the disease,” said Jacob Kirkegaard, senior fellow at the Peterson Institute for International Economics. “When you quarantine cities … you lose economic activity that you’re not going to get back.”

Kirkegaard said that hard-hit Japan, South Korea and Italy could slip into recession. And if the U.S. stock market continues to plunge, American consumers could lose confidence and cut their spending, threatening to turn the record-breaking 11-year U.S. economic expansion into a recession.

“You don’t need many more days like this,” he said, as stocks tumbled again on Wall Street.

In Asia, attractions including Tokyo Disneyland and Universal Studios Japan announced closures, and events that were expected to attract tens of thousands of people, including a concert series by the K-pop group BTS, were called off.

Investors watched as stocks fell across Asia. On Wall Street, the Dow Jones index suffered another brutal drop, falling 715 points in mid-day trading. The index has dropped more than 13% since last week.

Businesses large and small saw weakness, and people felt it in their wallets.

“There’s almost no one coming here,” said Kim Yun-ok, who sells doughnuts and seaweed rolls at Seoul’s Gwangjang Market, where crowds were thin Friday as South Korea counted 571 new cases — more than in China, where the virus emerged. “I am just hoping that the outbreak will come under control soon.”

Booking Holdings, which owns the online travel firms Priceline, Booking.com, Kayak and OpenTable, said this week that the coronavirus has had a “significant and negative” effect on its business.

Facebook announced that it would cancel its annual conference for software developers, set for early May in San Jose. The event typically attracts 5,000 attendees.

In Italy, where the count of 650 cases is growing, hotel bookings fell, and Premier Giuseppe Conte raised the specter of recession. Shopkeepers like Flavio Gastaldi, who has sold souvenirs in Venice for three decades, wondered if they could survive the blow.

“We will return the keys to the landlords soon,” he said.

Europe’s economy is already teetering on the edge of recession. A measure of business sentiment in Germany fell sharply last week. China is a huge export market for German manufacturers. Weaker business sentiment could lead companies to postpone their investment and expansion plans.

The economic hurt came with anger in Bangkok, where tenants at the Platinum Fashion Mall staged a flash mob, shouting “Reduce the rent!” and holding signs that said “Tourists don’t come, shops suffer.”

Tourist arrivals in Thailand are down 50% compared with a year ago, according Capital Economics, a consulting firm.

Kanya Yontararak, a 51-year-old owner of a women’s clothing store, said her sales have sunk as low as 1,000 baht ($32) some days, making it a struggle to pay back a loan for her lease. She’s stopped driving to work, using public transit instead. She also packs a lunch instead of buying one and is cutting her grocery bills. The situation is more severe than the floods and political crises her store has braved in the past.

“Coronavirus is the worst situation they have ever seen,” she said of the merchants.

Some saw dollar signs in the crisis. Twenty people were arrested in Italy for selling masks they fraudulently claimed provided complete protection from COVID-19. Police said they were selling them for as much as 5,000 euros ($5,520) each.

Japan’s schools prepared to close and the country’s Hokkaido island declared a state of emergency, with its governor urging residents to stay home over the weekend. The Swiss government banned events with more than 1,000 people, while at the Cologne Cathedral in Germany, basins of holy water were emptied for fear of spreading germs.

Globally, more than 83,000 people have fallen ill with the coronavirus. China, though hardest hit, has seen lower numbers of new infections, with 327 additional cases reported Friday, bringing the country’s total to 78,824. Another 44 people died there for a total of 2,788.

South Korea has recorded 2,337 cases, the most outside of China. Emerging clusters in Italy and in Iran, which has had 34 deaths and 388 cases, have led to infections of people in other countries. France and Germany were also seeing increases, with dozens of infections.

“I think this is a reality check for every government on the planet,” WHO Emergencies Program Director Michael Ryan said Friday after the agency raised its alert level. “Wake up, get ready. This virus may be on its way.”