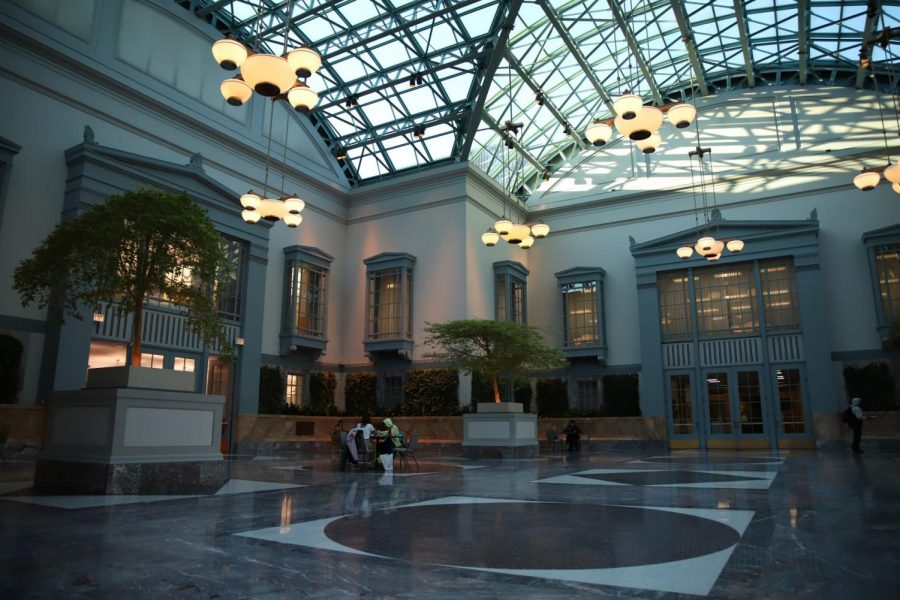 Harold Washington Library in the Loop.

DePaul University, as a city school, has much to offer its students. The Loop campus exposes students to the exciting and diverse city of Chicago. There are a multitude of places to discover, and there are several spots near the Loop campus that few students know about.

The Loop campus is not thought of as DePaul’s main campus, however it is unique in the advantages it provides students. As the third largest city in America, Chicago is the perfect spot for adventures and opportunities. As DePaul students explore the corners of the city, many have found places that have proved to be useful.

DePaul student Su Nandar came across a spot recently that has become her favorite place for studying and meditation. The Art Institute’s South Garden, located near Michigan Avenue and Jackson Boulevard, offers a quiet place in the middle of the bustle of the city.

“It’s nice to relax and get away,” Nandar said. “When you’re in the garden the whole outside world disappears and it’s like entering a secret world.”

The garden offers a scenic view of trees and plants planted in square formations throughout the spot. At the back stands a sculpture called the “Fountain of the Great Lakes,” which displays several nymphs pouring water onto each other, representing the Great Lakes and emulating the flow of the water system.

“You don’t see or hear cars, just the trees and the fountain, it’s very nice,” Nandar said. “It makes me happy.”

Quiet and serene places are treasured for studying spots by many DePaul students. There are a multitude of places around campus that provide a nice space. DePaul student Fabiola Horta shared one more spot to add to the list. Horta likes to study on the very top floor of the Harold Washington Library.

“It’s nice, very relaxed and quiet,” Horta said. “There’s a bunch of plants, natural light and it all makes you feel really calm.”

DePaul’s Loop campus also has its own little studying nook with a view, according to DePaul student Elizabeth Bradley. The spot known as the “skybridge” is located on the 10th floor of the DePaul Center. The space is a bridge with chairs and windows on both sides, providing a scenic view of Chicago.

“I like going to the skybridge for the view mostly and it’s quiet there as well,” Bradley said. “It’s the best for reading because there’s no tables and I like to spread out.”

There’s more places to go on the Loop campus besides studying spots. The Ray Meyer Fitness Center, located at the Lincoln Park campus, offers DePaul students four floors of studios and exercise equipment. However, as DePaul  student Adrian Maldonado points out, there is also a DePaul gym on the Loop campus.

The gym is located on the corner of Jackson Boulevard and Wabash Avenue, in the basement of the College of Computing and Digital Media building. Maldonado spends a lot of time on the Loop campus, so he has started to prefer this gym.

“It’s convenient because it’s right across the street, and not a lot of people go there so there’s more chances to use the utilities there,” Maldonado said.

The gym consists of one floor, two rooms, and locker rooms. One room is a space filled with mirrors, dumbbells, and some other yoga equipment. The other room is a large space with exercise and heavy-lifting machines. Due to its location, many DePaul students aren’t aware of its existence.

“I had no idea it was there until my co-worker told me about it,” Maldonado said. “I rarely ever see people go there, but it really is a nice gym.”

During the cold and brutal winter months in Chicago, commuting between DePaul’s campuses can become difficult and tiresome. While there are a few ways to shorten the time spent outside, DePaul student Michael Zapata suggests a useful one.

The Downtown Chicago Pedestrian Walkway, also referred to as the Pedway, is a network of tunnels underground that run to different parts of the downtown area. The entrances and exits are connected to stores, restaurants and train stations, such as the one linked to the Lake Red Line station.

For DePaul students, it can be an alternate route from train stations to class, instead of enduring the cold weather outside.

“It’s a good way to get around, especially if you’re in the loop or take the metra,” Zapata said. “It’s good when it’s cold outside and it beats traffic when it’s slow.”

For those who are not familiar with the Loop, it can be difficult to navigate through the tunnels. However, there are maps available, on the internet and in the tunnels, that can prevent someone new to the Pedway from getting lost.

“Not a lot of people know about it so it’s not that crowded,” Zapata said. “If you know what’s above you, you won’t get lost. The signs tell you what streets are above you.”

Food is a pleasure for many. Sometimes it can be hard to find a good place to eat, especially if the Loop campus is not familiar. Some DePaul students, however, know the ins and outs of where to get good food near campus.

“It was really good and they really cater to you,” Babio said. “They explain the whole restaurant and you can build your own burger. The food was delicious and I couldn’t finish all of it.”

Walking in the opposite direction of the Burger Bar is another restaurant recommended by DePaul  student Mattie McKinney. Nando’s Peri-Peri, located near Wabash and Monroe, is an Afro-Portuguese restaurant that serves flame-grilled chicken in spicy chili sauce. McKinney said that it is a nice change from the dining food at the Student Center.

“They serve the best chicken dishes and the ambiance is out of this world,” McKinney said. “No two Nando’s are alike so it’s fun to pop into different locations around town for a quick bite and check out the scene.”

If a change from restaurants is needed, DePaul student Jennifer Garcia recommends Cafecito. The Cuban cafe is located near Ida B. Wells Drive and Wabash Avenue and it is a cafe that serves authentic Cuban food and coffee.

“Their coffee and breakfast sandwiches are really good there,” Garcia said. “It gives off a good vibe and it’s very welcoming. I can communicate with the cooks in Spanish on a more genuine level and it’s more of a connection.”

Chicago’s diversity and size gives DePaul University students the opportunity to explore and be exposed to all kinds of neat spots. Keep an eye out in the Loop, and never stop trying to discover new places.