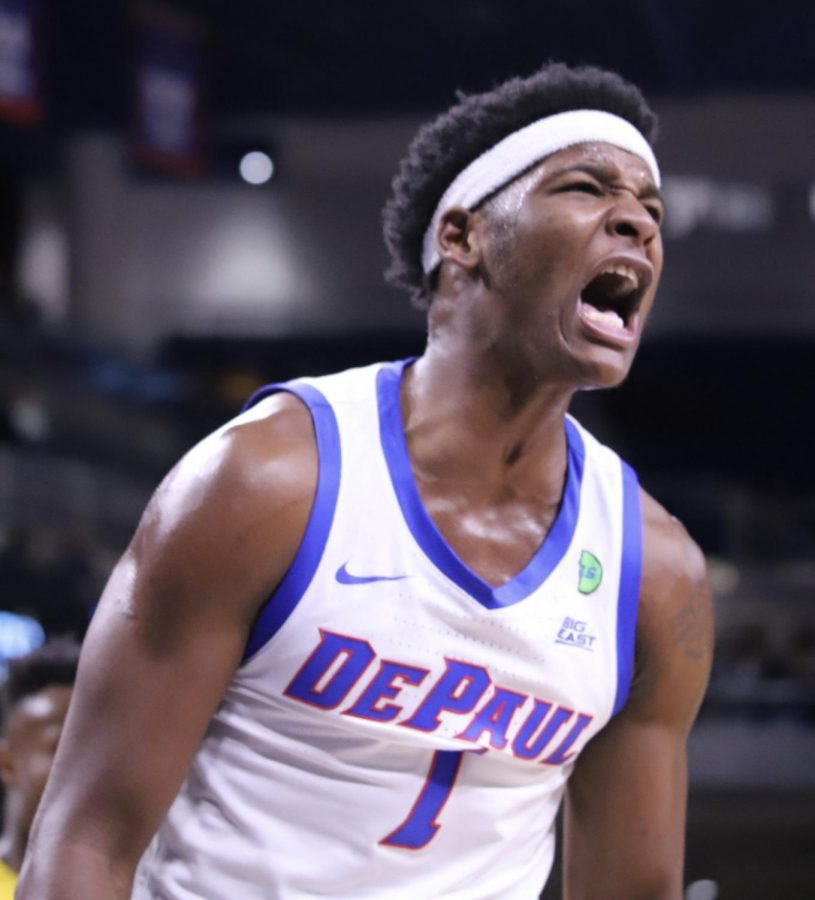 In the final home game of the season, DePaul provided its fans with plenty to cheer about against the Marquette Golden Eagles. The Blue Demons and the Golden Eagles traded shots at each other for 40 minutes, but it was the home team who made the key plays down the stretch and came out victorious 69-68 at Wintrust Arena.

With just under six minutes to play in the game, Marquette’s Markus Howard drained a 3-pointer to give his team a 58-51 lead and brought the large amount of travelling fans to their feet. But there was no quit for DePaul on Tuesday, with the Blue Demons rallying in the next 5:57 of the game to hold the Golden Eagles without a field goal.

After Howard knocked down the 3-pointer to put his team up seven, junior guard Charlie Moore answered on the next possession with his own three. The next couple of minutes, however, would turn into a free-throw shooting competition, with both sides combining to take nine and make eight in a two-minute stretch.

Howard knocked down two free throws to give his team a 63-58 lead with 3:33 left in the game, only for senior guard Jalen Coleman-Lands to come down the other end and knock down his second three of the game. DePaul would then manage to tie the game at 65 with less than a minute to play after sophomore guard Darious Hall knocked down a pair of free throws.

But that’s when the tide turned in DePaul’s favor. With 27 seconds to play, Howard went up for a 3-pointer that would have given his team a 68-65 lead, but he was met in the air by freshman forward Romeo Weems, who blocked his second shot of the game.

“The block, I think we just communicated, [Charlie] called out the switch,” Weems said. “Energy was already high, everybody was just playing hard. And then I knew [Howard] wanted the three, he wasn’t going to the basket. So, I played it and got the block.”

Weems’ block started a DePaul fastbreak that resulted in Moore getting fouled and going to the free-throw line for two shots. The Chicago native would drill both shots, giving his team a 67-65 lead with 27 seconds to play. Marquette’s Brendan Bailey then attempted a 3-pointer, but he couldn’t get his shot to go with 11 seconds left in the game. The Golden Eagles fouled Moore once again, and he poured in both shots to seal the victory.

For the final five minutes of the game, Weems was playing with four fouls but he was able to do just enough to block Howard without picking up his fifth foul.

“I try to be poised, like no matter the situation I try to play my heart out,” Weems said. “I can’t control the rest, some fouls I felt weren’t fouls. I just continue playing my game because when you try to not foul, you are going to end up fouling out. So, I just play hard and keep going through it.”

DePaul, who only shot 17-of-56 from the field and 4-of-22 from the behind the arc, went a season-high 31-of-35 from the charity stripe to carry them to victory. Moore, who only shot 3-of-15 in Tuesday’s win, made most of his impact from the free-throw line, going 8-of-9 to increase his scoring total to 15 on the night.

The Blue Demons were without junior forward Paul Reed, who has a hip pointer injury, for the second game in a row. In Reed’s place, Hall got his second consecutive start and added 11 points to the scoring total. But the player who stole the show against Marquette was Weems. The Michigan native was in attack mode in the first half, leading his team with nine points and nine rebounds.

“Both Romeo and Darious did a tremendous job with their length and effort on making Markus Howard work,” DePaul head coach Dave Leitao said. “[Howard] got real smart against both of those guys in the second half and got himself to the free-throw line. But he’s going to get his points, he’s that great of a player. I thought Romeo and Darious made him really work for what he got.”

Howard, who recently became the Big East’s all-time leading scorer in conference games, finished the night with 31 points on 7-of-20 shooting. Howard closed the game with a long three to make the final score 69-68, but his team nearly went the final six minutes without hitting a shot before Howard drilled in the final basket of the night.

“[In] the second half, not allowing them to get easy baskets and second shots,” Leitao said. “So, we hung in there because of our defense and its resilience.”

While the final scoreline went DePaul’s way, the start of the game wasn’t exactly perfect for them. The Blue Demons began the game by missing their first six shots and turning it over two times. With DePaul’s slow start, the Golden Eagles were able to take a 9-2 lead before the home team recorded their first made shot.

But Weems was able to get his team going with six straight points right around the rim, which started an 8-0 run for the Blue Demons to take a 10-9 lead. Marquette, however, responded by going on a 15-8 run to take its largest lead of the game, 25-17, with 7:30 left in the first half.

DePaul managed to climb back into the game towards the end of the half thanks to good defense and strong free-throw shooting. After a back-and-forth first half, both teams went into the break tied at 32.

The Blue Demons were coming off a highly disappointing loss to Butler on Saturday, 60-42, but they managed to preserve in the second half. Moore credits his team’s resilience in the final 20 minutes to a couple of good practices recently.

“We had a good week of practice last week before this game,” Moore said. “So, I feel like we handled it pretty well, even though it wasn’t a good game for us at all. So, I think we handled it well, we got back to the drawing board and we did what we did tonight.”

The win improves DePaul to 15-15 on the season and 3-14 in the Big East play, but the Blue Demons finish the season with an 11-7 home record. Even though the conference season hasn’t gone exactly how the program would have hoped it went, the Blue Demons were able to give their fans one final home game to be proud of — especially against their biggest rivals, Marquette.

“Our fans have been there, they knew it was a nip and tuck game at halftime,” Leitao said. “We got down a couple of times, we were trailing most of the way, then when we got those stops and made some key baskets, you could hear them. I think it really energized our guys. And in a split-second notion late in the game, this is how it felt like against Texas Tech, this is how it felt for those games that we had earlier in the season that our crowd really was a big part of a win. And I thought it happened today as well.”