Violence escalates between Hindus and Muslims in India 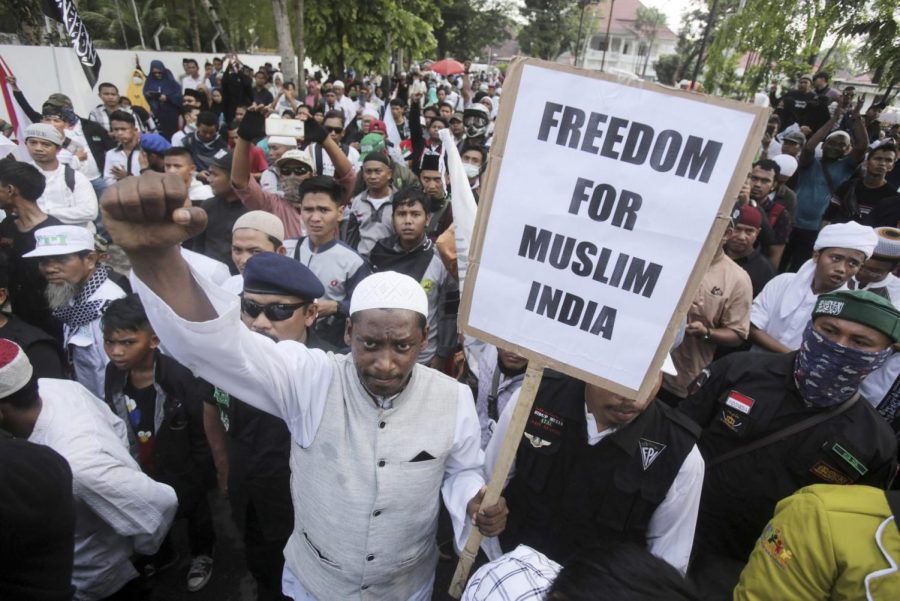 A Muslim man holds up a poster during a rally outside the Indian Consulate General in Medan, North Sumatra, Indonesian Monday, March 2, 2020.

Tensions rise in India amidst the ongoing violence between the Hindus and Muslims of New Delhi in what is becoming yet another global cry for humanity and justice.

On Feb. 24, a photograph of a man in a fetal position with bloodstained clothes began to circulate around social media. The Muslim man, Mohammed Zubair, 37, was surrounded by a mob of men holding bloodied sticks as they advanced towards a vulnerable and visibly wounded Zubair, landing blow after blow to the point where Zubair thought that he would die.

“They saw I was alone, they saw my cap, beard, shalwar kameez [clothes] and saw me as a Muslim,” Zubair said in a Reuters article. “They just started attacking, shouting slogans. What kind of humanity is this?”

Zubair is one of the dozens of Muslims faced with the blows of violence in the uprising between the Hindus and Muslims, and was one of the few that made it out alive. Approximately 38 people have died since the clash began on Feb. 24, and according to a Reuters report, the event of a mob screaming pro-Hindu slogans while attacking an unarmed man because he was Muslim further displays that this existing conflict may be hard to contain.

“The conflict itself is not between ‘Hindus’ and ‘Muslims’ – neither of these are monolithic groups in India,” Kalyani Menon, a religious anthropologist at DePaul University said. “The rise to dominance of the Hindu Right on the sociopolitical landscape of India is directly connected to the increasing violence against the minorities in the country. Muslims in particular, but also Christians and Dalits. While there are many groups associated with the Hindu Right in India, the one’s most directly connected to the current violence are those belonging to the Sangh Parivar, the family of organizations associated with the all-male Rashtriya Swayamsevak Sangh.”

Unrest across the nation began in December 2019 when the parliament released a legislation known as the Citizenship Amendment Bill which allowed for an easy avenue to obtain citizenship for Hindus, Sikhs, Buddhists, Jain, Parsis, and Christian religious minorities.

Muslims were not included under the regulations of the bill. As a result, numerous protests were carried out across the nation, including in Delhi, where demonstrators were detained and brutally beaten with batons by Indian officers. The nationalist party of Prime Minister Narendra Modi, Bharatiya Janata Party, spoke out and said their bill was enforced to protect the persecuted minorities in areas such as Pakistan, Bangladesh and Afghanistan, denying any sort of bias against the Muslims of India.

After the attack on Zubair, Tajinder Pal Singh Bagga, a spokesperson for BJP said the party did not support any sort of act of violence, and that this attack was the responsibility of rival parties that ignited the chaos during President Donald Trump’s visit to India.

“This was 100 percent pre-planned,” Bagga said in a Reuters report. He further went on to add that Delhi police deployed paramilitary forces in attempts to control the situation.

The Hindu-first agenda established by Modi since he first came back to power in May 2019 left India’s approximately 180 million Muslims at unease, especially because Hindus make up approximately 80 percent of India’s population.

“The Hindu Right constructs India as a Hindu nation, and has engaged in extreme violence against India’s Muslims,” Menon said. “In Gujarat in 2002, in Muzaffarnagar in 2013, and most recently in Delhi in 2020. The Hindu Right has been very successful at manipulating Hindu majoritarian sentiments to mobilize right wing Hindus towards their politics.”

After the attack that left approximately 24 people dead, Modi appealed for calm because of the worst sectarian violence in New Delhi in decades. However, the amendment bill has not been the only action taken by Modi that has appealed to the Hindu majority in India. In August, he stripped Kashmir, India’s only Muslim-majority state, of the special status it required so he could integrate it with the rest of the country and in November, the Supreme Court also gave Hindu groups control to construct a temple on the grounds where a mosque had once stood in the city of Ayodhya.

“It boils my blood to know that injustice, discrimination and prejudice is still something prevalent in the 21st century and it angers me that no one of real social status in the western society is open about the topic. I think that regardless of religion, regardless of skin color and even status, the Muslims in India aren’t even treated as human beings,” said Mohammed Ahmed,  a senior at UIC. “Their rights are completely violated. And yes, I live in a country where I’m able to openly practice my religion, but knowing that the country where my ancestors lived their whole life is under threat by the scathing injustices brought by Modi and his men makes me beyond upset.”

While Modi was a chief minister in Gujarat, some of the worst riots that had taken place in independent history ignited mistrust amongst the Muslims. Additionally, approximately 2,500 people who were mostly Muslims were killed in riots after 59 Hindu pilgrims were burned to death after their train was set on fire, with suspected Muslim perpetrators.

“There are many South Asian students in Chicago who have been organizing protests on and off college campuses all over the city,” Menon said. “Students at University of Chicago, Northwestern University and University of Illinois have been very active in the last few months. At this moment, finding ways to connect with South Asian student groups across college campuses would be a good way to start raising awareness and creating solidarity around these issues.”