The DePaulia interviews head of story of Pixar’s ‘Onward’ 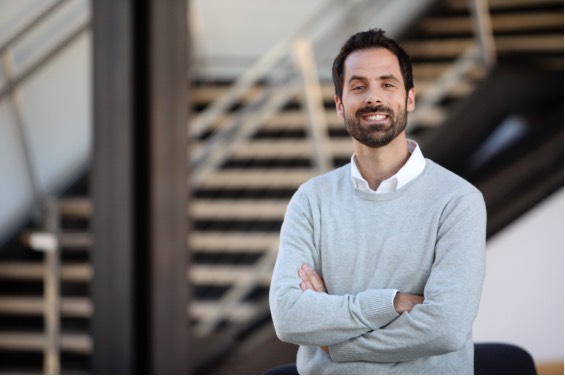 Kelsey Mann, the head of story on the new Pixar movie ‘Onward.’

A good story is only as powerful as the collaborative minds behind it. If any animation studio in America has actively shown this rather than just telling audiences it is Pixar. A plethora of award-winning and universally adored stories come out of this creative powerhouse. The films have always felt as distinctively personal in their creation as they are in their consumption and appreciation by the masses of crowds. “Up” and its optimistically tear-jerking look at grief and the inevitable parts of life. “The Incredibles” commentary on crippling identity and the conventions of the typical American family.

These films and their subsequent tales are attainable by all ages, with audiences perceiving these messages in perpetually expanding ways over time. The older we as viewers get, the more dynamic and powerful these Pixar projects become – as we grow the film’s messages seem to do the same. But how do these stories begin? Whose voices are present in these narratives that are so humanistic and sympathetic?

There are plenty of storyboard artists, writers, and more creative minds that contribute to just a singular film, with oversight being integral to the organization of all these bright minds.

Kelsey Mann is the head of story on the upcoming film “Onward” at Pixar Animation Studios, where he has worked in the story department on films like “Monsters University” and even “Toy Story 3.” From the film’s emotional roots to how his work helped mold the final product, Mann took me through a point-of-view journey of Pixar that left me equally amazed and inspired, just as many of the studio’s films have.

In “Onward,” a meta-fantasy world is presented where magic is possible but blissfully ignored in favor of electronic convenience. This void that magic leaves is one can be interpreted in many ways thanks to the vast appeal of Pixar’s narratives, a vastness that ended up relating more to director Dan Scanlon’s life than I initially thought.

“I always liked the idea of telling Dan’s life,” Mann said. “His dad passed away when he was six months old so he never knew his dad. I like this mix of a family that has experienced loss with a world that has lost its magic!”.

This loss that Mann is referring to is present in Scanlon’s own life and the film itself, with protagonist Ian not remembering his father. When Ian discovers the magic that his father left for him to discover, him and his brother Barley have 24 hours to see, hug and hang out with their deceased father. A premise that pulls more unpredictable sentimental jabs than I initially expected.

As with many aspects of any creative project, some things stay the same, like the film’s anecdotal image of the pants, one that represents Ian’s father, just halfway up. But, there are a lot of changes, and these changes are frequent and constructive at Pixar, as Mann explains.

“In this movie, we always knew where it was going to end. That’s kind of rare. We always had this ending,” Mann stated. “We storyboard and draw the whole movie and keep putting the movie up every three months, looking at it, and seeing if it is working or not. We usually do about eight screenings. If you look at the first screening of any Pixar film and what is theatrically released, it’s really different.”

The assistance from the imaginative community doesn’t stop there, as Mann even created a room called the “Fishbowl”, which became a crucial component to the story’s creation.

“The bigger the studio got, the more people would go back to their offices and not interact with each other,” Mann said. “I wanted to have a space where everyone could get together and bounce off of each other’s ideas. That is collaboration, and that’s where the magic happens.”

Collaboration soon became the main subject of our conversation, as it seems to just be innately woven within the culture of the company itself. The funky names keep coming, as now the “Braintrust” is the next piece of the puzzle when it comes to making a Pixar film.

“The Braintrust is a collection of creative minds at pixars, they’re writers and directors,” Mann said. “Pete Docter was our executive producer, so we were meeting with him constantly. You’re getting comments from so many smart people; it all helps elevate the movie.”

Mann said he not only makes sure that everyone’s voices are heard, but also that their collective experiences and perspectives are a part of the end product.

“You’re supporting a lot of people,” Mann said. You’re supporting the director, trying to get their vision and the best vision. You’re there to pick them up off the ground after a bad screening, to support the producer, the writers, and the team. My number one job is to support my story team and make them as successful as they can be.”

This support from Mann doesn’t stop with just getting his team to work well, but also making sure that individual goals are as prioritized as communal ones.

“Say there is a storyboard artist who has never done an action sequence before,” Mann stated. “I’ll talk to Dan and suggest that they do a chase sequence since they hadn’t that before. I’ll help them with that.”

This helpful attitude is one that characterizes the communal environment at Pixar, one that seemed to be a huge influence on what makes the final product so special. When everyone works together, everyone has a voice. When Kelsey Mann first recognized his voice at Pixar, it stood out as an especially proud moment for him.

“The feeling [of accomplishment] only gets bigger,” Mann said. “It’s incredible to go to a wrap party. There is this overwhelming sense of accomplishment and pride. My first wrap party was ‘Up’. I remember the credits rolling and at the end of the credits the Disney logo appears, and then they show the Pixar logo. When that Pixar logo came up, the pride that the studio had everyone applauding, and I had never experienced that.”

Mann’s love of storytelling was apparent before I walked into the room. I knew that from seeing “Onward” and from knowing Pixar and how much their films have resonated with me throughout my adolescence and eventual adulthood. Kelsey Mann walked me through the empathetic means of guidance and encouragement that he shows for his story team, the directors and writers, and the audience. Pixar shows all of this in their new film “Onward,” but I was just lucky to have someone from Pixar tell me about it.